If you're a fan of the series, Xtreme's general gameplay, familiar environments, and visual repertoire should be enough to warrant a purchase.

Mega Man is celebrating his 14th birthday in style with Capcom's latest, Mega Man Xtreme, a game that also happens to represent the blue-suited hero's first appearance on Nintendo's Game Boy Color system. Unfortunately, the festivities are cut short when Techno, a dastardly mega-hacker, subverts control over the world's mother computer and breathes life into the villains of Mega Man's past. In order to stop him, you'll take on 15 unique bosses, acquire four body modifications, and experience a plethora of levels ripped straight out of the 16-bit Super Nintendo Mega Man X titles.

On the surface, Mega Man Xtreme is pure platform gaming fun. To defeat Techno and his minions, you must jump, dash, slide, and shoot your way through the computer network. Techno's put a number of jumps, obstacles, and computerized life forms in your path, but Mega Man's suit power ups should even the odds. As you obtain these power ups, you'll eventually double your vigor and firepower, as well as obtain fun, new ways to destroy blocks with your head. Getting through each level is difficult at first, but memorizing the layout of each should get you to the stage bosses in no time.

A big aspect of the Mega Man universe is its bosses and the ability to assimilate their powers. Mega Man Xtreme is no exception. As you defeat each boss, you'll also assimilate each one's powers into your arsenal, such as Chill Penguin's shotgun ice or Wheel Gator's spin wheel. As in prior Mega Man titles, the order in which you vanquish bosses is important, as the power you obtain from one may lend you an advantage over another.

Unfortunately, the game's main downside is its difficulty. The game's main levels are well designed, with a variety of alternate routes, but they also possess an inordinately high number of cheap hits and surprises. The game's eight Mavericks, cherry-picked from previous Mega Man X titles, exude cheapness. The first four - Chill Penguin, Spike Mandrill, Flame Stag, and Storm Eagle - all have clever attack patterns, but their thick life meters and high damage potential make defeating them an odious task. On the upside, patience, perseverance, and a good memory should eventually get you past these and the other four standard boss characters. The same can't be said for the game's other bosses, however. Various forms of Serge, Zain, Geemel, Spider, and Sigma frustrate you at every turn, up to the point that the game's Xtreme mode oftentimes becomes an exercise in frustration.

One can't condemn a game for just being difficult, especially one based upon an old-school series. However, another major contributor of Mega Man Xtreme's challenge level are the intermittent issues it has with frame rate, control, and collision detection. As you approach ledges, traps, or ladders, the game tends to send a few enemies or projectiles your way and slows down in the process, therefore throwing your timing into the toilet. Should you clear the enemies away and make that particular jump, the game may speed up for a split second to compensate. Worse still, you may just take a hit from a phantom projectile or fall through the ledge. Capcom tidied up a number of these issues for the North American release of the game, but enough remain such that choppiness is still an integral, and unfortunate, aspect of gameplay.

If you manage to memorize level layout and predict the onset of choppiness, Mega Man Xtreme actually delivers an otherwise decent showing when it comes to graphics and sound. Like the SNES Mega Man X games, Xtreme uses overly proportioned characters, exaggerated animation, apocalyptic environments, and energized cutscenes, which lend a uniquely Japanese animation feel to the game. Whether running, sliding, jumping, shooting, or just standing about, the game portrays its protagonist as a coiled tiger waiting to strike - except the tiger is packing space-age weapons and grinning. Stock enemy sprites aren't as detailed or interesting as Mega Man himself, but the game's bosses, such as Armored Armadillo and Chill Penguin, do an excellent job of motivating one's ire. Admittedly, the game's backgrounds don't scream perfection, but they're neither garish nor ugly. What is ugly, though, is the amount of flicker present throughout the game. Entire enemies, projectiles, and ledges disappear from the screen at random, wreaking havoc on the entire experience. As for sound, well, once you get past the laughably tinny sound effects, Mega Man Xtreme's music rules. Every level has its own unique background track, each of which is as catchy and articulate as many of Nintendo's best efforts.

If you're a fan of the series, Xtreme's general gameplay, familiar environments, and visual repertoire should be enough to warrant a purchase. Unfortunately, the game's difficulty level combined with its numerous control and visual flaws should serve as a point of caution for casual game players. If you're looking for bragging rights, however, showing off your defeat of the game is a good way to go, as Mega Man Xtreme is, without a doubt, the most difficult and lengthy Mega Man title to date. 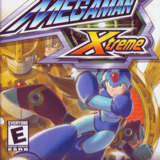