Last year's Mega Man X7 marked the premiere of Capcom's loveable, heroic blue robot boy on the PlayStation 2. Unfortunately, the game proved to be a pretty inauspicious debut for the company's vaunted mascot, as it strayed from the series' tried-and-true mechanics and replaced them with frustrating new ones. Mega Man X8, the aptly titled follow-up, returns the series to a more traditional style of gameplay and eliminates some of the annoyances of its predecessor. However, while that's all well and good, X8 can still often be an intensely frustrating game, and still isn't especially fun.

Like X7, Mega Man X8's setup is a mostly throwaway tale of good robots versus bad robots that dabbles in a lot of nonsensical anime-style ramblings about things that are of little importance to the actual game. In actuality, all you really need to care about is the process of shooting up a bunch of robot bosses, taking their weapons, and moving on to the next round, much like in the olden days of Mega Man. Of course, it isn't all quite so simple, as the additional characters introduced into the X series previously, Zero and Axl, are playable once again. You'll begin each stage by picking two of the three characters, each of whom has unique strengths and weaknesses. Mega Man (or X, as he's referred to in this series) has his usual abilities, including his charge blast and the ability to acquire special weapons from fallen foes. Axl can shoot in multiple directions and angles, and can hover in midair. And Zero is good in close combat, and can double-jump. Of course, since nearly all the enemies you'll be up against are best fought from long range, X and Axl are usually your best bets.

The basic gameplay in X8 should be pretty familiar to any Mega Man fan. Rather than the sort of 2D-3D mishmash found in the last game, X8 is mostly a 2D-style side-scroller, with a couple of little Viewtiful Joe-like 3D elements thrown in for good measure. You'll run around the game's levels, shooting up bad-guy robots, solving some occasional puzzles, and then shooting up boss robots. While this might sound wholly appealing to the nostalgia-focused crowd, the execution of this classic brand of action platforming isn't nearly as solid as it should be. This is mainly because the level designs just aren't very good. While you'll run into no shortage of challenging and occasionally intelligent platforming puzzles, far too many of them can be surmounted only through trial and error, requiring you to run through them repeatedly to memorize where all the different instant-kill spike pits are in relation to the jumps and drops you'll have to make, and so on and so forth. This is pretty frustrating on its own, but the fact that the game employs a limited continue system on all difficulty levels but the easiest makes it even more so.

Another problem is that the combat simply isn't all that interesting. Despite the fact that all three playable robots can earn new weapons and abilities over the course of the game, it isn't often that these new weapons ever really feel all that necessary. There are certainly specific situations and bosses where a particular weapon is most effective, but more often than not you can get by just fine using the default weaponry. The one nice thing is that since you have two characters to control, you can switch between them on the fly by tapping the L2 button. Additionally, the game features a special combo attack that can be performed by pressing the R2 button at just the right time during a battle. Doing so sends you into a cutscene, where your two characters stand in a The Matrix-looking environment, complete with green computer code shooting all over the place, and blast the hell out of a bad guy. However, while the combos are reasonably effective, they really don't look very cool, and they really don't inflict enough damage to make them truly worthwhile.

Mega Man X8 isn't purely the age-old brand of Mega Man gameplay the entire way through, either, as there are a few stages that deviate from the norm. A couple of levels include vehicular combat, where you're in a ship, traveling along a rail and shooting everything that comes into your path. While flying these ships, you can boost or brake suddenly, depending on the situation. But apart from that, you rarely ever need to do anything other than hammer on the fire button, and that tends to get old rather quickly. Even some of the side-scrolling missions shift away from typicality, such as one stage where you'll find yourself having to engage in some cheap stealth action, dodging a bunch of moving spotlights to avoid setting off alarms that bring forth scads of enemies. Unfortunately, like the ship stuff, this stealth section (and pretty much every area that shies away from the purest of 2D action) tends to get very dull very quickly.

However, the most disappointing aspects of the gameplay are the boss battles. While the bosses can be plenty difficult, that's about the only thing they have going for them. The actual designs of the bosses are just plain silly. For instance, you have the Burn Rooster, a flame-inducing chicken, and you have the Optic Sunflower--Plant Man, anyone? The designs themselves might have been forgivable if the fights were interesting, but they never are. The patterns used by each boss are easy to decipher, and the only real challenge comes from the fact that their attacks tend to do a lot of damage. Granted, the fight patterns of Mega Man bosses have never been extremely complex, but this brand of boss fight just doesn't hold up as well as it did back in the 8- and 16-bit days, and these new character designs aren't as good as the old ones.

The only other aspect of Mega Man X8's gameplay that bears mentioning is its character-upgrade system. In between every level, you'll have the opportunity to shop for upgrades for your characters, including additional energy tanks, new weapons, and new attacks. Cool idea in concept, but again, the game doesn't really execute this system very well. The energy tanks are of course useful, but a lot of the character-specific upgrades really aren't. Many of the weapons and attacks just seem useless, and even the few useful ones rarely come into play. Mainly, the whole thing just seems tacked on.

Mega Man X8 just isn't that appealing from a visual standpoint, either. Though the horrible camera issues that plagued much of X7 are absent here, the overall look of the game is bland and supremely uninspired. In addition to the lousy boss designs (and two other robot designs that are rip-offs of Boba Fett and M. Bison, respectively), the game's various stages lack any remarkable characteristics, and mostly just look like rehashes of the same kinds of things the series has been doing for years now. Even worse, the game's frame rate can be quite erratic, despite the modest graphics, leading to a lot of areas where the action simply slows to a crawl. The audio in the game also conspires to bring down the entire experience, mostly thanks to the generally poor voice work. It's all cheese-ball anime-style voice acting that overemphasizes just about everything, and it only serves to distract, rather than entertain. None of the music tracks really bring much to the table either, unfortunately.

Is Mega Man X8 a more playable game than X7 was? Sure, absolutely. Is Mega Man X8 particularly fun? No, not really. The shift back to the gameplay style that reigned during the golden era of Mega Man doesn't work to the game's advantage, and, as a whole, the game is beset by so much frustration and banality that it's difficult to recommend. If you're on the hunt for an old-school Mega Man experience, go grab a copy of Mega Man Anniversary Collection, as it will serve you far better than X8.

View Comments (5)
Back To Top
6.3
Fair
About GameSpot Reviews 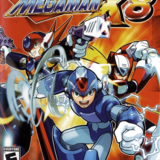