Crazed platformer fans, Mega Man X4 is what you crave.

Some video games the masses can enjoy, and some video games cater to the hard-core fanatic of a specific genre. Flight sims are a good example, as are most golf games. What many don't realize, though, is that even a genre as innocuous as the simple platform shooter has a hard-core fan base - a league of players that can run faster, shoot longer, and generally destroy any side scroller in one sitting. These blister-thumbed few need something better, faster, harder. Games like Mega Man X4 are created for them.

First, you must be a fan of the motif to even understand this game. By motif, I'm talking about anime and all the Speed Racer-esque backgrounds, bizarre character names, and recycled sound effects that go along with it. In addition to the general aesthetics of the game, all the cinematic scenes are 100 percent anime, right down to the shamefully bad voice acting. The first scene introduces you, by means of a frantic music video, to all the game's major characters. From there you are thrust into the action of the game's first two-stage level, which serves as a teaser to the rest of the story.

Through much in-game exposition, we learn that General and Colonel (great names!), under instruction from the evil Sigma, have incited Repliforce, an army of reploids formerly allied with our heroes, the Maverick Hunters, to riot. Following Sigma's plans to destroy the human race that created them, they have demolished a Maverick Hunter base and promise to continue the destruction until their final weapon is complete, and the earth is vaporized, or something like that. It is, of course, up to Mega Man X and his faithful partner, Zero, to foil their plans and save the earth from destruction.

Inventive it is not, but this latest installment in the extensive Mega Man series does sport enhanced graphics, a new soundtrack, gigantic bosses, and one other notable enhancement - this is the first of the series that lets you play as X or Zero. Capcom is hyping this feature as providing "two separate adventures." While it does increase the game's replay value, it's decidedly not two separate adventures. The game follows one scenario with a few differences, such as sidekick and dialogue, depending on the character you choose - much like Sonic and Knuckles or Resident Evil.

The real difference between characters lies in how the game plays. Play as X, and the gameplay is very similar to the other Mega Man X games. You run around and shoot things, collecting armor from Dr. Light and new weapons from your fallen adversaries. If you play as Zero, the story doesn't change much, but you must alter tactics used to fight attackers and overcome obstacles. Zero is armed with a Z-Saber instead of X's Arm Cannon, making it necessary to fight up close. No armor is provided for Zero, and instead of looting his enemies for new weapons, Zero learns a new fighting tactic when he slays an opponent. This introduces an element of head-to-head-fighter gameplay into the mix and makes it necessary for you to learn button combos to pull off each move. Needless to say, playing as Zero increases the difficulty level a bit.

No matter which character is used, though, this is one tough game to beat. Challenging gameplay, as in all previous Mega Man titles, is the key here. Each level, with few exceptions, is designed to include little secrets and interesting terrain. Each new weapon or fighting move learned requires practice to master. The various baddies are quite illusive and hard to eliminate. The real challenge waits at the end of the level - another Mega Man trademark. Providing formidable bosses has always been Capcom's strong point. Here, the true side scroller fans are separated from the rest. It is a real test of will to sit in front of a TV and blast away at the same massive robotic bad guy for hours straight. Some find it tedious to the point of delirium; others love the challenge. I found it tedious. I tend to enjoy a few more puzzles in the levels themselves and a tad less adversity at the end of them. Fortunately, MM X4 is executed just well enough to make the monotony bearable.

The control layout is intuitive, and the reaction time, while not quite as good as the PlayStation version, is unsurpassed on the Saturn. The soundtrack, while incredibly typical, is filled with the Japanese video-game synth-pop hooks we all hate to love, and the cutscene dialogue, though pitiful, is a definite improvement over Mega Man 8. The graphics, unlike previous Mega Man titles, take full advantage of the Saturn's color palette, lending the game a decidedly 32-bit look. The transparency effects from the PlayStation version, however, are impossible to duplicate on a Saturn, and the result is passable but not pretty. The multiple-parallax backgrounds are rendered quite well, but, as in lots of Saturn titles, some slowdown occurs in the frame rate when the scrolling is at its fastest. If you've got both systems, definitely go for the PlayStation version.

All in all, a few more 3D effects would have been nice, but the decision to stick with a true 2D environment is bold, if somewhat outmoded. Aesthetically, Mega Man X4 is a sizeable improvement over its predecessors, but you must remember that it's only a side scroller. Seventy or 80 similar games are out there that are just as good. If you're looking for something new, look elsewhere. If you're one of those crazed platformer fans, though, Mega Man X4 is what you crave. 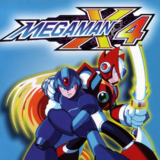