Mega Man Star Force 2 is the eighth game in the Battle Network series, which began on the Game Boy Advance. When Capcom moved Mega Man to the Nintendo DS, the Star Force series introduced new characters, storylines, and an over-the-shoulder battle perspective. However, little else changed. The gameplay mechanics, graphics, and audio design in Mega Man Star Force 2 are essentially the same as those of its predecessors. Nevertheless, if you enjoyed previous entries in the series or are an avid fan of dungeon-crawling role-playing games, then you'll probably find a number of redeeming qualities.

This time around, you play as Geo Stelar, a typical kid living in the year 20XX. Flipping on your activator goggles lets you see the Wave World, an electromagnetic dimension that exists parallel to our own and powers all of our electronic devices. By merging with an alien being named Omega-Xis, Geo Stelar becomes Mega Man and is able to interact with both worlds. In Star Force 2, Geo takes on a group of criminals who are attempting to resurrect the ancient civilization of Mu. The plot is laughable and serves only as an excuse to travel from one environment to the next. It's worth noting that Capcom's localization team has done a better job translating the insurmountable text than in the past, but the game's inane story is made all the more excruciating by the seemingly endless stream of corny filler dialogue.

Battles in Star Force 2 take place on a 3-by-6 grid. The camera is restricted to the back of Mega Man's head, and his movement is generally limited to sidestepping left or right. Enemies can move around the entire battlefield and attack in any direction, which puts more emphasis on the timing of your attacks, evasions, and blocks than in previous games. Unfortunately, the frequency of these random battles is so ridiculously high that at times you'll barely take four steps without another encounter popping up. The relationships that you forge with friends throughout the game are given numerical values that can be converted into new abilities such as barrier shields, more powerful weapons, and increased hit points. Rather than gaining experience points and leveling up, you improve Mega Man's skills by building a balanced repertoire of battle cards from defeated enemies. Assembling your deck of 34 cards is a fun, addictive endeavor, but once you've established your favorite combinations there's little reason to change things up.

Mega Man Star Force 2 follows the Pokemon marketing strategy and comes in two absurdly named versions: Zerker X Saurian and Zerker X Ninja. The subtitles refer to three warring tribes from the Mu civilization. After consuming the OOPArt several hours into the game, Mega Man can transform into a Zerker, a Saurian, or a Ninja and gain elemental abilities from electricity, fire, or wood, respectively. The Zerker tribe is available in both versions, whereas Saurian and Ninja are exclusive to each particular game. There's no need to purchase both versions, given that you'll gain access to abilities from each tribe throughout the game. Alternately, you can hook up with friends locally or via the Nintendo Wi-Fi Connection to trade abilities, battle cards, and status upgrades. You can also compete in battles with up to seven players, as long as everyone owns a copy of either the Saurian or Ninja versions. The online functionality in Star Force 2 is a long-overdue feature that really enhances your enjoyment of the game, especially if a friend can help you out with that last, elusive battle card that you need.

If you've played any of the Battle Network games on the Game Boy Advance, you'll know what to expect from the presentation here. The graphics do little to take advantage of the DS hardware. In fact, the only indication you'll get that you're not playing a GBA game is during battle sequences. Considering that a lot of the battle screen is taken up by the back of Mega Man's head, even these superior animations are obscured. Music, sound effects, visual assets, and even major boss battles are all recycled from previous games. It's a shame that a series that was once known for its high audio quality has been reduced to these ever-so-slightly remixed samples of tired tracks.

Besides a few minor tweaks to the battle mechanics, a new story and characters, and the addition of online multiplayer, this is essentially the same game as previous entries in the series. If you were a fan of those games, you'll find 30 to 40 more hours of the same here. If you weren’t, the random battles, fetch quests, and endless bloat won’t change your mind. 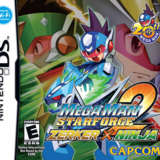