The story may justify the price of admission, but there's really nothing new in Mega Man Battle Network 6 that wasn't in previous games.

You'd think that after five games in four years people would have had their fill of the Mega Man Battle Network series. Apparently not, because Capcom has just put out the sixth installment, chronicling the further adventures of the kid net- battler Lan and his cyberspace partner Mega Man. Longtime fans may be disappointed to discover that there's really nothing in Mega Man Battle Network 6 that wasn't in the previous games, but they'll likely feel compelled to finish this one anyway, since the story provides the payoff for events that have been building since the first game. On the flip side, this new game gives newcomers to Capcom's role-playing series the perfect opportunity to jump in, because it incorporates all of the key features from the five previous games, recaps a fair amount of Lan and Mega Man's past, and serves as the launching pad for future games that will star a new pair of heroes.

Like its five predecessors, Mega Man Battle Network 6 combines traditional role-playing with action-oriented combat. The central idea is that the real world and cyberspace exist as two separate-but-linked universes. A young boy named Lan wanders around and interacts with people and places in the real world, while his electronic counterpart, a Navi named Mega Man, explores cyber dungeons in the virtual world and partakes in random battles against evil Navis (called viruses). The things you do in cyberspace will unlock doors or activate machines in the real world, and vice versa.

Combat isn't turn based like it usually is in role-playing games. Instead, battles happen in real time on a 6x3 grid, which is split evenly into player and enemy areas. Naturally, you want to deplete their health meters before they obliterate yours. Mega Man can use his buster cannon in battle, but his better attacks are randomly decided by drawing tiny cards known as battle chips. Five chips are selected at the beginning of each battle, and when they're used, others are drawn to take their places. Some chips are better against certain types of enemies, and some can dole out damage to a whole swath of grid squares. Multiple attacks can be chained together by using chips with the same name or letter designation, and some chips can be combined to create stronger attacks. That's where most of the game's strategy comes from: collecting and organizing the battle chips in your active folder. In all, there are 250 unique chips to find and collect.

Previous games have let Mega Man transform into other Navis on a limited basis, but only when the appropriate chip was used. This new game eases up the Navi cross system to the extent that you can now transform Mega Man into any of 10 other Navis and gain their powers for as many turns as necessary, without the need to wait for any specific chip. For instance, to transform into Heat Man, the only thing you need to do is select him from the list. Once you do so, your flame attacks will gain an attack bonus and Mega Man will become strong against grass-type viruses and weak against water-type viruses.

Dark-attack chips and chaos unisons, which in previous games let Mega Man harness powerful dark attacks at the risk of losing health permanently, have been eliminated from Mega Man Battle Network 6. In their place is the new BeastOut system. Roughly four hours into the story mode, Mega Man conveniently absorbs a powerful cybeast creature, which he can unite with in battle. Uniting with a cybeast doesn't require any special conditions. All you need to do is select the BeastOut button, and Mega Man will transform, gaining a significant attack bonus and the ability to charge up most attacks in the process. The only limits on the use of cybeasts are that they're only active for three turns and Mega Man will run amok if you don't wait a few turns before using the BeastOut button again. As the game's subtitle suggests, there are two cybeasts, called Falzar and Gregar. Falzar lets Mega Man float above the battlefield, rendering him immune to broken and cracked panels, whereas Gregar outfits Mega Man with a beefy armor upgrade. You can even BeastOut after transforming into another Navi, which gives you the best of both worlds: a supercharged, elemental Navi.

In keeping with the series' tradition, it isn't possible to unlock all 10 link Navis and the two cybeasts in a single copy of the game. Mega Man Battle Network 6, like its predecessors, comes in two flavors, called Cybeast Falzar and Cybeast Gregar. The story and environments in each game are identical, but each game has its own exclusive cybeast and set of five link Navis. If you're looking to pick up the game and don't intend to buy both versions, it may help you to know that the Falzar version is geared toward water- and ground-type Navis, whereas the Gregar version is geared toward flame- and electric-type Navis. Thankfully, it is possible to collect all 250 battle chips by playing through a single copy of the game. Previous installments have forced players to link up and trade battle chips to obtain them all. This new game still lets players trade chips, but linking up with a friend isn't required to complete the collection.

While the revamped Navi cross and BeastOut features make it easier to transform into other Navis, these changes don't do much to change how the game works. Regardless of whether you fight as Mega Man or as a cybeast, you're still just picking chips and making attacks until your opponent is vanquished. Fighting against boss Navis is interesting, but all of the frequent, randomly occurring battles against generic Navis get old real fast. Once you've used your more visually impressive chips a couple times, the process of selecting chips and performing attacks becomes a mechanical, rote exercise. There's also an incessant amount of back-and-forth travel involved in running errands for characters and advancing the story. Like all of the other games in the series, this new game doles out its features and story points in deliberate baby steps. It takes roughly four hours to gain the ability to BeastOut and a good 10 hours to acquire half of the available link Navis. Meanwhile, the story builds so slowly that you won't even have a good idea who the bad guys are until you're about 15 hours in. That's about half the time it takes to complete the story mode. The inclusion of request missions takes some of the linearity out of the story, but it's still quite a grind. All of this stuff is par for the course in the series, which means that if you didn't like the previous games or feel burnt out on the formula, this new game won't do anything to change your opinion.

Even if the changes don't affect the overall flow of the game, Capcom at least deserves some credit for trying to shake up gameplay. The same can't be said for the graphics and audio, which are, to a large extent, holdovers from Mega Man Battle Network 2. In the traveling view, the big-headed characters and three-quarter-view environments are pleasing to look at, but the washed out colors and dearth of animation are far below what the Game Boy Advance is capable of. In the battle view, Navis pop instantly from one square to the next on the battle grid, instead of walking, and their bodies transition into attack poses in two or three jerky frames. The visual effects that accompany attacks, however, are wonderfully explosive. Some of the chip artwork was redrawn for this new game, although not necessarily for the better. You won't pay attention to them anyway after your umpteenth random encounter. Music and sound effects are serviceable, as always. Some of the familiar Mega Man themes, present in the series from day one, are still a joy to hear, even after five sequels. Frankly, it's hard not to be a little bit disappointed that Capcom, a company known for churning out fast-paced, highly animated games, hasn't done much to spice up its marquee handheld franchise during the past four years.

One aspect that Capcom did put some thought and effort into is the game's story. Significant events involving major characters happen frequently. Right from the outset, Lan and his family move away from ACDC town to Central Town, giving players new characters to interact with and new places to visit. Story points seeded in previous games are finally brought to fruition. We finally find out what the WWW and the Colonel have been up to all these years. Also, the narrative in Mega Man Battle Network 6 concretely links the Battle Network universe to the overall Mega Man timeline. Early on, Mega Man develops the ability to exist in the real world thanks to a new invention called a CopyBot. The implications of that development on the overall Mega Man universe are obvious. Furthermore, new characters are introduced that are clearly precursors to the major characters in the original Mega Man games. Longtime fans or newcomers with a strong interest in the Mega Man universe will absolutely adore the story that unfolds in Mega Man Battle Network 6.

It'll probably take most players roughly 25 or 30 hours to complete the story mode. After that, a postmortem quest opens up that can easily add another five or 10 hours to the overall play time. That's a healthy amount of play time for a handheld RPG. You can also squeeze mileage out of the game by battling your friends in the link-battle mode. All in all, you'll get your money's worth should you decide to take the plunge.

Whether you should take the plunge, though, depends on how burned out you are from playing previous games in the series. If you're a newcomer, go for it. For anyone that poured their heart into any of the last two or three games, however, Mega Man Battle Network 6 definitely comes across as been there, done that. It doesn't help that Capcom hasn't significantly updated the graphics or audio since the second game was published in 2002. Despite those complaints, the story alone may be enough to see longtime fans through to the end of this one. 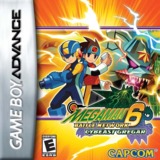