Mega Man Battle Network 5 improves on the previous game, but it also rehashes the same basic design, graphics, and audio that have been with the series since its inception.

Another year has gone by, and, like clockwork, Capcom has published the next installment in its Mega Man-themed role-playing-game franchise. On the one hand, Mega Man Battle Network 5 improves on the features that were introduced in the previous game and implements some new features that longtime fans should appreciate. On the other hand, it also retains the same graphics, audio, and basic game design that have been with the series since its inception roughly four years ago.

Central to every Mega Man Battle Network game is the idea that the real world and cyberspace exist as two separate universes. The stars of the show are a young boy named Lan and his souped-up cell phone, a Navi named Mega Man. Lan can enter homes, visit shops, take the train to different towns, and talk to people out in the real world, but his primary purpose is to find places where Mega Man can "jack in" to the Net. You can jack in to computers, household appliances, vending machines, toys, and all sorts of other Net-capable devices. These environments are set up just like the dungeons in a traditional role-playing game. In them, Mega Man has to locate clues and find other Navis to talk to, and he also has to put up with frequently occurring random battles against evil Navis (called viruses). Often, the things you do in cyberspace will unlock doors or activate machines in the real world.

Capcom hasn't changed the way combat works. Battles still take place on a 6-by-3 grid that's split evenly into player and enemy areas. Instead of taking turns, like you would in a traditional role-playing game, you and your enemies can move and attack in real time. Apart from his buster cannon, the majority of Mega Man's attacks are contained on tiny cards known as battle chips. Five chips are randomly selected at the beginning of each battle, and when they're used, others are drawn to take their places. Some chips are better against certain types of enemies, and some can dole out damage to a whole swath of grid squares. Multiple attacks can be chained together by using chips with the same name or letter designation, and some chips can be combined to create stronger attacks by linking together three chips with the same name and sequential letter designations. You can only bring 30 chips into battle with you, so that's where most of the game's strategy comes from: collecting, organizing, and storing useful battle chips in your active folder. In all, there are 287 unique chips to find and collect.

Like other games in the series, Mega Man Battle Network 5 supports the use of a link cable for linking together two GBA systems--so that people can trade chips, swap game data, and pit their Navis against one another in arena battles. Even though the single-player mode lets you replay cleared missions and boss battles any time you like, it's still nice that the game gives you the option of interacting with live opponents.

The main thing this fifth game does differently from its predecessors is give players the ability to alternate between multiple Navis (in addition to Mega Man) during so-called liberation missions. Liberation missions are basically just turn-based variations of cyberspace levels. Each level is filled with dark panels that block your way to the boss. By using the Navis on your team, your goal is to liberate dark panels until you clear a path. Each dark panel contains a group of viruses--so battles aren't random--but you can only liberate one panel per turn with each Navi. Once all your Navis have been used, your turn ends, and the boss gets its chance to heal its minions or conjure new viruses to stand in your way. By the end of the game, you'll be controlling as many as six other Navis during liberation mission levels. They don't have chip folders of their own (instead, everyone uses Mega Man's active folder), which is sort of lame, but each Navi does at least have its own special attack chip and unique buster cannon attack. Some Navis also have the ability to hop over certain panels in a level or to dish out damage without actually starting up the battle interface.

Mega Man Battle Network 5 is available in two different versions: Team Colonel and Team Protoman. The story and locations in both versions are the same, but you encounter different bosses and enlist different Navis to your team depending on which version you play. Each version also offers a different set of soul unisons based on the Navis that join you. Soul unisons let you upgrade Mega Man's buster cannon with other Navis' powers. For instance, uniting with Protoman transforms the buster cannon into a powerful sword. Neither version's soul unisons are particularly better than the other's, but, generally speaking, the unisons in Team Colonel focus on attacking multiple opponents, whereas the unisons in Team Protoman are geared toward maximizing the damage done to a single opponent.

Owners of Mega Man Battle Network 4, the previous game, will be happy to learn that this latest installment fixes some of the features that were introduced in that game, as well as includes a few new features all its own. Many of the dungeons in cyberspace now include puzzles and side games, instead of just leading the player toward the exit with a constant flurry of random battles. Battle arenas have a wider variety of terrain, such as rocks and leafy vegetation, and some arenas are split so that enemies are on the left and right side of the screen while Mega Man is in the middle. Best of all, dark chips have been made easier to use. Dark chips are powerful attack chips that can cause Mega Man to lose HP or turn evil if they're used too frequently. There are twice as many now, and they can be collected and put into folders just like regular chips. Previously, the CPU would occasionally just insert a random dark chip into the deck during a battle. This new method is nice because it lets players choose whether or not to use dark chips. Another welcome change is that dark chips can now be used in soul unisons without any lasting effects to Mega Man, apart from the off chance that they'll backfire and conjure up another enemy on the other side of the arena. This gives players a way to use dark chips without pushing Mega Man toward the dark side.

The story in Mega Man Battle Network 5 is also much more coherent and involving than the garbage plot that was concocted for the fourth game. In Mega Man Battle Network 4, players spent most of the game participating in tournaments and running errands for people. The ultimate enemy, along with Lan and Mega Man's role in the overall story, wasn't revealed until the game was almost over. This fifth installment, thankfully, is set up so that Lan and Mega Man are constantly meeting new adversaries and uncovering clues in the context of the story. The story itself is your typical bad guy trying to take over the world plot, but it has a few twists and turns involving Lan's friends and family. In a nutshell, Dr. Regal, Lan's constant nemesis, has joined up with a group called Nebula, which has begun taking over entire areas of cyberspace. A group called the Anti-Nebula Corps is formed to retake those areas, and Lan joins them when Dr. Regal kidnaps his father. Everything you do in the game is guided by the story or moves it along, which is really what you want out of a role-playing game.

Once again, unfortunately, the graphics and audio are pretty much identical to what was used in the first Mega Man Battle Network game, which was published in 2001. In fact, if you've played any of the previous installments, you'll quickly notice that many of the environments, backgrounds, and characters have simply been recycled for use in this newest game. The character graphics used for the Navis and viruses, as always, are fairly large and benefit from looking just like the sprites that were in the old Super NES Mega Man games. There isn't much animation to speak of, however. Characters pop instantly from one square to the next on the battle grid, instead of walking, and their bodies transition into attack poses or react to damage in two or three jerky frames. The backgrounds and floor tiles that make up the battle arenas are also extremely bland. They only employ a few colors, even though the GBA can display 512 at once, and, aside from a few infrequent color changes and flame effects, there's absolutely nothing happening. As for the graphics that make up the real world and cyberspace, the three-quarter-view environments and bigheaded characters look just like what you've seen in the majority of other GBA role-playing games. Everything is easy to make out, and the various characters, like Lan and his friends, actually walk around instead of popping back and forth like the characters in the battle arena viewpoint do. The crayon-style colors, goofy portraits, and nonanimating backgrounds look very out-of-date though, especially compared to games like Golden Sun or Fire Emblem, which employ photo-realistic graphic elements and richly detailed anime-style artwork.

Likewise, major portions of the music and sound effects have also been recycled from earlier Mega Man Battle Network games. In general, they're a combination of dramatic melodies, familiar Mega Man themes, and serviceable pops and explosions that come together into an overall soundtrack that fits the action without going overboard. It's just a shame, though, considering what developers have been able to squeeze out of the GBA, that the Mega Man Battle Network franchise continues to rehash graphics and audio that are now more than four years behind the curve.

Longtime fans probably won't mind very much that the graphics and audio are so stale, because this new game finally brings together and fleshes out all the features that Capcom has been adding to the series with each successive release. Newcomers, too, should also be able to tolerate the bland presentation in light of what's otherwise a solid role-playing game with an action-packed combat interface. 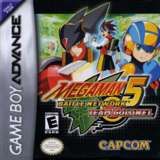