Capcom's Mega Man franchise has been a gaming staple ever since the little guy first started battling evil on the NES in the late '80s. The series has remained one of the few classic franchises that has managed to hang tough through the various successive iterations of home consoles. While every entry in the series hasn't been a classic, Capcom has managed to keep the series going, and it has experimented with the Mega Man formula. One of the most successful new spins has been the latest run of games on the Game Boy Advance. The Mega Man Battle Network games have put an engaging twist on the Mega Man legend, and they've even managed to introduce some fresh new gameplay elements as well. The latest installment in Mega Man's continuing GBA adventures, Mega Man Battle Chip Challenge, takes place in the same universe as the Battle Network series, but it also offers up a new card battling style of gameplay that's unique, addictive, and fun.

For those who are unfamiliar with Mega Man's GBA adventures, the Battle Network series has updated the Mega Man mythos and has turned it into a traditional adventure that revolves around computer viruses and the Internet. You'll play as Lan, a young boy who owns a PDA-style device called a PET, which is home to a unique form of artificial intelligence known as a "net navi." Lan's navi is none other than our familiar hero Mega Man. The Battle Network games have sent the pair up against the evil WWW organization, which is a terrorist group intent on disrupting cyberspace with a virus. Lan challenges the WWW's plans by sending Mega Man into cyberspace and directing him in battle against the WWW's navis. Mega Man Battle Chip Challenge finds the pair entering the Battle Chip Grand Prix, which is a tournament against other humans and their navis. While the pair are a competitive duo, their real motivations for entering the tournament revolve around discovering the WWW's ties to the tournament and consequently thwarting any nefarious plans it may have. The best way to do so is to enter the tournament and battle through the ranks. While the premise may sound run-of-the-mill, it's a fine setup for the game's most appealing element--combat.

Mega Man Battle Chip Challenge offers two basic modes of play, a single-player story mode and a two-player multiplayer component. The single-player story game uses a standard objective-based structure that's laid out in a tournament-ladder format. The game's story unfolds in a linear fashion, although how you choose to tackle the competition is up to you. When you first start the game your options will be fairly limited. You'll just be able to go through the various options in your PET to customize Mega Man's attacks, and you'll also be able to link up with a friend for fighting. As you progress through the game, you'll open up new game options, including different stores and competitions.

The gameplay in Mega Man Battle Chip Challenge offers an entirely new mechanic whose heavy strategy is more akin to a traditional card game than the previous entries in the Battle Network series. Rather than use cards to attack your foes, you'll make use of the battle chips from the game's title. You'll arrange your chips on a 12-slot grid. The centerpiece of the grid is a chip representing the net navi you're using. Each navi chip in the game features its own unique attributes in four areas, including hit points, attack points, megabits, and an elemental affinity. Hit points represent the amount of damage a navi can take. Attack points let you know the amount of damage your navi will inflict when it unleashes its signature move in battle. Megabits let you know the max memory capacity for that particular navi, which directly affects what chips you can equip on its grid. Finally, the elemental affinity lets you know as to whether or not your navi is tied to one of the four elements in the game, which are aqua, fire, electricity, and wood. A navi's elemental affinity will affect how much damage its attacks will inflict and how much damage it will sustain. For example, a fire navi that uses a fire-based attack chip will get a boost in attack power. Along the same lines, a wood navi who's attacked by a fire-based assault will take more damage.

The chips in the game feature a variety of uses, which range from offensive attacks that damage your opponent (in addition to the cards in your opponent's deck) to defensive moves, such as health restoration and damage shields, to even battlefield transformations that change the site of combat to elemental states that will further increase your navi's attacks. Once you've laid down your chips and engage in combat, the game basically runs on autopilot. The game will randomly select chips from the three rows that are laid out in front of your net navi chip, which determines your navi's actions in combat. Navis will fight until either their hit points are depleted or 10 rounds have passed, at which point a winner is named based on the number of chips destroyed. The extent of your involvement during combat includes slotting in supplementary chips when your navi's onscreen meter fills, which is similar to combat in the Battle Network games. In between multi-opponent battles, you'll be able to adjust your layout of chips to better deal with an enemy. For example, there's no real reason to struggle against an aqua navi with a fire navi due to the amount of damage the water-based attacks inflict on fire-affiliated chips. However, if you happen to swap out your main navi with Elecman, you can "shock" the aqua navi with electric-based attacks that inflict lots of damage. As you win battles, you'll earn new chips as well as "zenny," which is a sort of currency that you can spend in the game's shops.

The overall presentation looks sharp and is comparable to the previous Battle Network games. Mega Man and the rogue's gallery he faces off against are nicely detailed and animate well. Some of the enemy navis you'll fight sport a whimsical design that hearkens back to some of the bosses from classic Mega Man games. Slickly animated sequences serve as eye-popping transitions to combat as well as providing trippy backgrounds for the cyberspace brawls.

The audio in the game is solid albeit restrained in a few spots. The game's music is a catchy highlight that's equal parts Street Fighter-esque fighting anthem and bouncy Mega Man theme music. Voice is kept pretty minimal, although you'll hear the odd grunt as you play. Sound effects are a mix of sounds we've heard in the previous games, but some new audio bits have been thrown in to keep things interesting.

Overall, Mega Man Battle Chip Challenge is a great game that won't disappoint Mega Man fans with its engaging quest and fun combat. The game manages to offer an alternative experience to the traditional Battle Network games. The abilities to duke it out with friends and to trade chips are nice perks that give the game plenty of playability. The combat may be too hands-off for some players, but it does a really good job of forcing you to use your brain as you arrange your chips properly. Mega Man Battle Chip Challenge manages to be both an engaging action game as well as a pretty addictive card game. Anyone who's searching for a change of pace and wants something that's easy to pick up and hard to put down should definitely give Battle Chip Challenge a look. 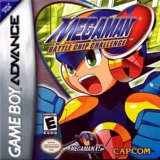