In a time when a deluge of halfhearted classic gaming collections are flooding the market, Mega Man Anniversary Collection manages to get it right.

For all the successful franchises Capcom has brought into the world over the years, it's hard to imagine where the company would be today had it not given figurative birth to everybody's favorite heroic, light-blue tinted robot boy, Mega Man. Since Mega Man's NES debut in 1987, the courageous robot has starred in plenty of classic action games, including two of the best side-scrolling action platformers ever made in Mega Man 2 and 3. In more recent times, Mega Man has been subject to a bit of branching out into other genres, including role-playing games (with the Command Mission series) and card battling games (in Mega Man Battle Chip Challenge). But for a moment, forget all of that nonsense, because Mega Man Anniversary Collection is here, and it brings you none of that. Instead, this love letter from Capcom to Mega Man fans everywhere brings you the first eight Mega Man action titles in all their beautiful side-scrolling glory, complete with plenty of unlockable extras and the magic that is the autosave feature. In short, in a time when a deluge of halfhearted classic gaming collections are flooding the market, Mega Man Anniversary Collection manages to get it right.

If you're reading this review, you should know by now what a Mega Man game is and how it all works. If you were born after 1992 or have suffered from an unreasonable fear of friendly blue robots up to this point in time, we'll give you a quick rundown. Essentially, you (as Mega Man), the protagonist of the series, are a robot with a gun for an arm. The evil Dr. Wily is your primary antagonist, and he has a penchant for creating oddly themed evil robots, ranging from the likes of Air Man (who is essentially just a big fan with eyes and a gun) to Yamato Man (a robotic samurai with a spear). You shoot, slide, and jump your way through each robot's assigned level, eventually defeating each of the robot masters. Of course, that's not all there is to the Mega Man games. Once you've defeated each evil robot master, you gain his powers in the form of a new weapon. These weapons are often especially useful for beating specific bosses. Additionally, you can choose to take on any of the different robots in any order, so the strategy in gaining the right weapons for the right bosses comes into play. After you dispose of all the different robots, you then eventually go on to tackle Dr. Wily and another one of his crazy doomsday contraptions, once again attempting to save the world from peril. Lather, rinse, and repeat over the course of eight different games, and that's Mega Man Anniversary Collection in a nutshell.

Each of the eight primary games featured in Mega Man Anniversary collection is an absolutely perfect port. Nothing's been lost in the translation between generations of hardware--not even the little bouts of sprite flicker many fans will remember from the early NES days. However, while nothing may have been lost, a few things have been gained--thankfully, none of which is a detriment to the whole experience. Essentially, a few of the conventions from later Mega Man titles have been imported into the older games. Pressing the triangle button on the PS2 or the Y button on the GameCube fires an automatic three-shot burst from your arm cannon, and in every single game, you now have the option to automatically equip any of your weapons or Rush items (or just "items" as they're known in Mega Man 2) on the fly, thus saving you quite a bit of time. The nice thing is that these additions are purely optional, so if you're some kind of crazed purist who demands only the most refined Mega Man gameplay, you'll have it as well.

Another optional change made to the game is the addition of "navi mode." Essentially, this is the onscreen heads-up display from Mega Man 8, made available in every game. This interface shows you how many lives you have, what direction you need to be going in, and when danger is on the approach. Navi mode also turns on completely remixed audio tracks for Mega Mans 1-7. Interestingly enough, however, it apparently only does this for the PS2 version and not the GameCube version. Each of the tracks, though much higher in production value, manages to still sound completely faithful to the original. All told, if you're looking for something a little different, navi mode is certainly a nice change of pace. Again, if you demand purity, you can simply leave it turned off.

The one addition made to the game that isn't optional is its use of autosave in between each level completed. Essentially, this replaces the old password system used to save your progress in between bosses--so you wouldn't have to go back to play Quick Man's mind-achingly irritating stage over and over again. (Don't lie. You know you hated it.) Frankly, it saves plenty of time and effort. And, hey, you can always go back to just start a new game if you really feel like schooling Crash Man in three hits with the old air shooter over and over again.

But what would a classic gaming collection be without a bevy of extras? Though Mega Man Anniversary Collection isn't rife with unlockables, there are more than enough for any Mega Man freak to eat up. Aside from plenty of production art and remixed audio tracks, Anniversary Collection also features two arcade Mega Man fighters, only one of which ever saw any sort of release in the US. These games are Mega Man The Power Battles and Mega Man The Power Fighters. In these games, you basically just go through a bunch of boss fights against some of the more memorable robotic villains from the Mega Man lexicon. They're pretty light on gameplay or lasting value, but they're certainly worth checking out. The PS2 and GameCube versions both present platform-exclusive extras as well. On the PS2, you are treated to a full episode of the Mega Man animated series, while GameCube players get several producer interviews. Of the two, the producer interviews are definitely more interesting, but ultimately, it's a fairly even mix between the two.

Aside from these platform-specific extras and the lack of in-game remixed audio tracks on the GameCube version, the two iterations of Mega Man Anniversary Collection are almost identically playable. Control differences are practically nil, though one slight irritation on the GameCube controller is that its control scheme assigns the shoot button to the A button and jump to B. While a reversal of this formula seems like it would have been a more natural fit, this is a minor thing, and it really doesn't take any time to get used to the GameCube controls at all. Obviously, when it comes to visuals, neither version of the game really looks any different from the other--and if it did, then there would be something seriously wrong. When it comes right down to it, these are really, really old games that were--for the most part--designed for ancient hardware. If you have a problem with playing games that feature crusty, old sprites and very little in the way of visual detail, then Anniversary Collection isn't going to cut it for you.

However, if you don't mind outdated graphics and have any interest in Mega Man whatsoever, then there isn't a single reason not to pick up Mega Man Anniversary collection. This is simply one of the richest, most well-put-together classic compilations ever made, and it manages to not only refrain from sacrificing key elements of gameplay for the sake of making the hardware transition process easier but also makes improvements that are not only great but practically seem like common sense. Not to mention all of the neat unlockables that are sure to please any longtime fans of the Blue Bomber and his many adventures. And on top of all of that, you can't forget the fact that you're getting 10 games for the price of your average budget title. To be quite blunt, if you profess to be a proponent of classic gaming, you would be doing yourself a grave disservice by passing up Mega Man Anniversary Collection. 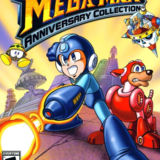