Medal of Honor Infiltrator is a fun mission-based shoot-'em-up that's similar in style to old-school arcade games like Commando and Frontline.

Medal of Honor is a highly successful first-person shooter franchise that started out on the PlayStation and eventually made its way onto a variety of platforms, including the PC, PlayStation 2, GameCube, and Xbox. Unfortunately, in 2002, while set-top consoles received an excellent one-two punch in the form of Medal of Honor Allied Assault and Medal of Honor Frontline, the Game Boy Advance got an ugly, subpar remake of Medal of Honor Underground--a game that was originally released for the PlayStation two years earlier. This year, Electronic Arts is back with another Medal of Honor game for the GBA, called Medal of Honor Infiltrator. Thankfully, the first-person graphics have been done away with in favor of a top-down viewpoint, and now the game's been fashioned into a fun mission-based shoot-'em-up that's similar in style to old-school arcade games like Commando and Frontline.

In its 15 total levels, Infiltrator brings together a variety of different play styles that should be familiar to anyone who's played their fair share of 8- and 16-bit games. Most levels are presented with an overheard viewpoint that has you looking down on a large portion of the surrounding area. These stages share a great deal in common with such classics as Commando, Ikari Warriors, and Frontline. You use the directional pad to walk around in the environment, which is typically a large jungle or village. Enemy soldiers appear at varying intervals, and you need to use your character's machine guns and grenades to eliminate them. Your weapons shoot toward the direction you're facing, but you can hold down the R button to lock your aim in one direction while you walk in another. Interactivity with the environment comes into play fairly often. You can hide behind houses and other buildings to stop enemy bullets, and there are a number of structures that you can actually go inside of. Small houses and tents give you the opportunities to switch weapons or replenish your health, while larger buildings are often entire sublevels unto themselves. If you come across a stationary gun or a tank sitting in a level, you can put these weapons to use against the enemy. The stationary gun has unlimited ammo, but you can't pick it up and take it with you. The tank, on the other hand, can be driven through a level. Additionally, it can be used to run over enemy soldiers, and its cannon can be used to destroy enemy artillery and buildings. Each level has a number of mission objectives assigned to it, such as locating documents or destroying ammunition depots. To complete a level, you need to accomplish these goals.

Roughly one-third of the game's levels pluck you out of the overhead view and place you into the gunnery seat of a large vehicle--like a jeep, tank, or bomber. These levels are shown from a first-person perspective. As the terrain moves from right to left, you're supposed to use the crosshairs to shoot at the various soldiers and vehicles that appear. The A and B buttons let you fire your guns and throw grenades. You can earn additional ammunition and health items by shooting the barrels in each stage. Those of you who were playing video games in the late 1980s will recognize this setup from Taito's Operation Wolf, which was released in arcades and was available for the NES.

You could argue that Netherock, the game's developer, didn't demonstrate much in the way of originality or creativity by basing the play styles of Medal of Honor Infiltrator around such classic games as Commando and Operation Wolf, but when you consider that neither of these games has been remade to death in the intervening years since they first came out, the combination here doesn't feel too clichéd.

The game also does an excellent job of capturing the unique elements that give the Medal of Honor franchise its own identity. Some levels have scripted events that push the story along, usually in the form of air raids and ambushes. Stealth plays a major role in gameplay. You can hide behind buildings and sneak up on enemy soldiers. This allows you to knock an enemy out with the butt of your rifle instead of drawing in reinforcements with a loud rifle burst. The only penalty for causing a commotion is that you'll have to fight three times as many enemies to finish a level. That's good because it doesn't prevent players who just want an all-out action game from having a fun time. The different weapon configurations also resemble what you'll find in a console-based Medal of Honor game. You can carry around a low caliber machine gun and 10 grenades, a high caliber semiautomatic rifle and five grenades, a sniper rifle and a set of five timed explosives, or a bazooka with eight shots and an accompanying pistol for a side arm. Each configuration has its trade-offs with respect to range, power, and ammunition capacity, so it's cool to experience just how differently each level plays when you're equipped with a specific weapon.

The complaint most people will have about Infiltrator is that aiming isn't precise enough. You can aim in eight different directions, which is the standard for games like this, but the enemy always seems to slip through the cracks when you can least afford it. Some of the game's more realistic aspects also take their toll on your ability to aim. Whenever you take damage, your character gets pushed back and is briefly stunned, and when you empty a clip, you can't fire again until you finish reloading. These kinds of details are sweet, but they're bound to annoy some people.

In the end, though, it's all of the little details that give Medal of Honor: Infiltrator its own unique look and feel, and it's the details that drive home the impression that this isn't just Commando 2003. The first mission of the single-player campaign opens up with your character in a troop boat as its storming a heavily defended beach in Africa. The whole scene looks like a snapshot from Omaha Beach during D day--with your mates getting slaughtered left and right and enemy bombers shelling you as you make your way up the beachhead. All of this is drawn by using the same 2D backgrounds and tiny character sprites that make up everything else in the game. Every level has something in it to see. Searchlights wander back and forth while you're trying to sneak past patrol towers; the shadows of enemy bombers appear before they drop their payloads in your vicinity; grenades arc through the air when you toss them; enemy soldiers wave their hands in the air to catch the attention of their comrades. A fair amount of the storage space on the cartridge is taken up by a series of video clips that feature footage taken from old World War II newsreels. These clips play out between missions and inject a lot of flavor into the game. Apart from the snappy details, the game also does a good job of filling the screen with soldiers and bullets--though without slowing down. There are occasions when a large explosion or grenade will bring things to a brief halt, but these instances are rare.

As interesting as the graphics are, it's the audio that ties everything together. The game uses digitized sound clips for things like gunshots and voices. Enemy soldiers cry out for help when they discover you and scream when they die, while your character calls out whenever an ambush occurs or when your health reaches a dangerous level. Like the video clips that play between missions, the background music also has a historical slant to it. Instead of the rock 'n' roll-style songs typically used for the background audio in this sort of game, the music here sounds like the arrogant drum beats and organ music you'd hear while watching a movie theater newsreel from the 1940s. Some people will be annoyed by the static that's been intentionally injected into the music, but it does give the soundtrack a certain aura of authenticity.

Arcade-style shoot-'em-ups typically don't offer much in the way of different play modes. Usually, the urge to play the game over and over again is what gives a game like this its replay value. For the most part, this is true of Medal of Honor Infiltrator. Once you know how to play and figure out the best ways to clear out handfuls of enemies at a time, the excitement level is raised a notch because you feel like you're an invincible killing machine who's stalking the enemy as a cheetah would stalk a baby gazelle. This sort of violent catharsis is what made the military-themed arcade games of the 1980s so great. You'd get pumped up and know what it felt like to take on all of those bullies from the playground, but you didn't have to get your butt kicked in the process.

Medal of Honor Infiltrator offers 15 missions, which you can play from beginning to end in the campaign mode or tackle one at a time in the quick start mode. Most players will end up playing through the campaign mode a few times in order to collect all of the gold and silver medals that are earned by clearing away the enemies in a level and by satisfying all of the secondary mission objectives. By collecting medals, you can unlock a harder version of the campaign mode, as well as a survival mode where the goal is to see how many soldiers you can kill before you run out of health. The setting for the survival mode is a village that features a number of different neighborhoods to fight in.

Infiltrator also has a modest selection of connectivity features that broaden the game's overall value for those people who can take advantage of them. Using a link cable, you and someone else can play through levels cooperatively or against one another. People consistently voice their anger whenever an action game comes out that doesn't feature two-player co-operative play, so it's nice to see that Electronic Arts included this option in one of their games. If you have the GameCube version of Medal of Honor Rising Sun, you can use your GBA as a real-time map in that game by linking Medal of Honor Infiltrator to it by using the GameCube-GBA Connectivity Cable.

Medal of Honor: Infiltrator borrows heavily from the classic games it's inspired by and, at the same time, captures most of the things that give the franchise its identity. The typical overhead shoot-'em-up doesn't have much to offer except the sheer thrill of killing one enemy after another. Netherock has taken that simple design and has updated it for today's player by adding depth through the inclusion of stealth elements, tricky AI, first-person crosshair-shooting sections, and a varied assortment of mission objectives. The end result is a fun handheld game that should please anyone who's looking for an action game with teeth. 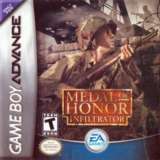 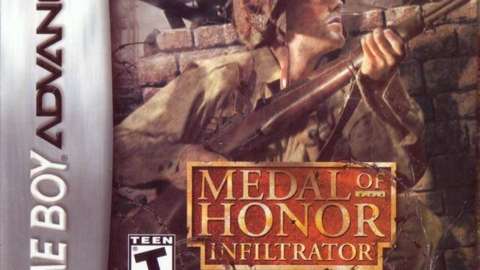 Medal of Honor Infiltrator is a fun mission-based shoot-'em-up that's similar in style to old-school arcade games like Commando and Frontline.