The solid single-player campaign is over in the blink of an eye, but a strong online component makes Medal of Honor Heroes 2 worth a look for anyone who enjoyed the previous game.

Medal of Honor Heroes was a surprisingly good first-person shooter on a system that was not known for having a whole lot of good first-person shooters. Fans of that game will be pleased to know that although Medal of Honor Heroes 2 brings very little new to the table outside of slightly improved gameplay and an impressive online mode, it's just as fun as its predecessor.

There's a bit of a story to MOH: Heroes 2 told via narrated still pictures in the form of premission briefings, but it's mostly inconsequential. You're an operative in the special forces, and it's up to you to stop Hitler from deploying his new rocket, the V2. Throughout the course of seven missions, you'll perform the usual array of activities found in many WWII-based FPSs: You'll plant charges, pick up documents, fight in a church, and launch mortar rockets. You'll also man large cannons and stationary machine guns, as well as kill seemingly endless waves of Nazi soldiers. At this point, the developer doesn't even try to explain where these soldiers are coming from because you can literally see them appear from thin air right in front of you on numerous occasions. Don't expect any advanced artificial intelligence from the game either. Enemy soldiers will run right past you in an effort to get to their preprogrammed destination. In a tremendous victory for equal-opportunity advocates worldwide, your fellow squadmates are just as inept; they'll stand mere inches from a bad guy without so much as batting an eye. They also love to shoot walls. Other minor issues include the fact that it is sometimes tough to see where you're getting shot from on the PSP's small screen and there's no way to save midlevel, which is a problem because the levels are significantly longer than in the last game. But given all these flaws, the game is still good. How?

Heroes 2 is able to overcome its mostly routine objectives by performing well in other areas. For starters, the game moves at a fast pace--faster than your typical FPS on the PSP. The series has always had an arcade edge to it and the controls can handle it. Thus, the fast gameplay doesn't feel unnatural and serves only to make things more exciting. You won't spend your time traversing long empty sections of terrain and you won't have to inch forward to progress through a level. You can't just run through the levels willy-nilly because Nazi soldiers are good shots, but usually, you just find some cover so that you can recover your health, quickly take a few guys out, and then scamper to the next group of enemies to mow them down.

The speedy gameplay wouldn't have been possible if this Medal of Honor had poor controls. The controls aren't totally revamped, but they simply feel better. You move with the analog stick, look around by pressing the face buttons, and fire with the right shoulder button. There's always a reticle onscreen that turns red when it's over an enemy, so you can shoot that way or you can press the left shoulder button to raise your weapon and use the sights. This control scheme is shared by many other first-person shooters on the PSP. It might just be that we're growing accustomed to this layout, but it feels better here than it typically does elsewhere. Your aiming reticle moves at just the right speed, making it easy to move from one target to the next, but you don't move so fast that you can't line up the shot once you've found the next target.

The single-player campaign probably won't take you more than four or five hours to finish so it's good that the game's online mode will keep you coming back for more. Given the hit-and-miss nature of online play on the PSP, it's impressive what EA has done with Heroes 2. Up to 32 players can duke it out online, up from eight in the last game. The game modes aren't groundbreaking, but they're what you'd expect from a Medal of Honor game. The level designs are based on maps from the single-player campaign. They've been reworked a bit for multiplayer and are well designed. The multiplayer succeeds because there are 32 players playing at the same time, so there's always some action, even if that action occasionally lags, as was sometimes the case. Although PSP owners have other options for online first-person shooter play, Heroes 2 is a worth a look for its multiplayer alone.

One thing that hasn't changed a whole lot since the last game is the visuals, but Heroes 2 does look crisper and runs smoother than Vanguard. It also has a bit more color than your typical WWII game so it's less dreary than what you may be used to even though the levels take place in the same sort of locations you've no doubt grown accustomed to: underground bunkers, a beach, a church, a small town...you know the drill. Other than offering up stereotypical locations, the only real knocks against the graphics are that enemy soldiers aren't very detailed and frequently clip through solid objects. What you'll hear from Heroes 2's audio is what you've heard from Vanguard, Heroes, Airborne, and every other Medal of Honor game: good-sounding weapons; sparse, but fitting music; and soldier chatter.

Thanks to solid controls, a short, albeit enjoyable single-player campaign, and an impressive online mode, Medal of Honor Heroes 2 is a battle worth fighting. It really is a good game that should please anyone who has enjoyed previous Medal of Honors and isn't yet tired of trying to stop Hitler once and for all. 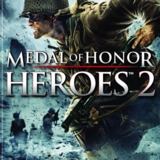