Medal of Honor: Allied Assault, the first PC installment of Electronic Arts' WWII-themed shooter series, is superb. However, if the realistic setting has led you to expect a serious combat simulation along the lines of Ghost Recon or Operation Flashpoint, you're going to be surprised and perhaps disappointed. Medal of Honor is first and foremost a run-and-gun shooter--a really, really excellent run-and-gun shooter. A lot of clever scripting and precisely orchestrated mayhem lend it a sustained intensity that more open-ended tactical shooters often lack. Relatively short but very dense, it's like one-half game and one-half amusement park ride.

Medal of Honor isn't very heavy on story. Instead, the game is split into six more or less disconnected missions spread across more than 30 different levels. Rather than focus on creating memorable characters or surprising plot twists, the developers at 2015 have taken an arguably more effective route by constantly introducing memorable set pieces and surprising new gameplay elements. As in Half-Life, you witness everything from the fixed first-person viewpoint of your character. All the "cutscenes" are seamlessly integrated into the ongoing events of the level. Control is never taken away from you. Just as in Half-Life, this technique is incredibly effective for creating a sense of both urgency and of attachment to the game's environments. It's an ongoing mystery as to why developers don't use this uninterrupted viewpoint more often.

Over the last couple of years, 10 to 15 hours appears to have become the standard length for single-player shooters. Medal of Honor doesn't break this trend and should take you slightly longer than 10 hours to complete on the standard difficulty setting. However, it packs a lot of content into those hours. You won't ever have to force yourself through the game. This is mainly due to the wide variety of interesting things and unexpected events that happen on a regular basis. It seems as if the developers have tried to inject every level with some completely new challenge or new combination of elements from previous levels. It's a testament to this variety that to give many specific examples would be to ruin the surprise.

Even so, at least one specific example is in order, just to give a sense of how involving Medal of Honor's missions can be. You begin the first level riding in the back of a truck with four members of your squad. The squad leader informs everyone that you're attempting to infiltrate a Nazi-occupied village. You can see another truck driving behind you. Both vehicles stop at a checkpoint, and a German guard approaches the rear truck and begins talking to the driver. As the conversation drags on, your squad becomes progressively more agitated. Finally, the driver of the rear truck pulls a gun and shoots the guard, at which point alarms sound, gunfire erupts all around you, and the rear truck explodes in a fireball. Your squad jumps out of its truck and you follow. With the leader barking orders, you all advance on the village gates, eventually making your way to a courtyard. There, you're ordered to check a door. As you do, German soldiers appear all across the rooftops and balconies surrounding the small courtyard. You're trapped and chaos ensues, as bullets and grenades rain down on your squad. Eventually, a door is blown open and you're ordered to enter a building, get to the second floor, and commandeer a mounted gun that's currently being used against you. Once you do that, and turn the gun against the Nazis, an ally joins you and tells you he'll cover you from a window while you head to the far end of the courtyard. By the time you make it, the entire rest of the squad is dead, and you're forced to continue to the next level alone.

This isn't the first mission, but rather just the first level. Things continue apace from there. While not all of the following levels are as eventful as the first, virtually every one breaks up the traditional straightforward run-and-gun action with some twist. One level that re-creates the Normandy beach storming scene from Saving Private Ryan is quite likely the most intense and well-executed set piece in shooter history. It's the perfect implementation of Medal of Honor's apparent design philosophy: the heavily scripted level that somehow feels alive and completely spontaneous.

In what has become a disclaimer that, at this point, should probably just be left implied in every shooter review, the enemy artificial intelligence is not as good as Half-Life's. However, it's not bad either. The Nazis don't exhibit any real squad-based behavior, and they'll sometimes come running single file around a corner as you shoot each one in turn, but those that don't come sprinting after you tend to use cover well. They also know how to toss grenades and get out of the way of incoming grenades. If fact, you can provide cover for yourself by tossing grenades and then advancing while the Nazis are busy scampering out of the way.

Two things contribute to making the fights especially intense. First, other than snipers who are sometimes frustratingly accurate, the rank-and-file soldiers you'll face aren't perfect shots. Gunfights usually involve bullets spraying all around you, instead of merely straight into you. Second, when you do get hit, you become incapacitated for a brief moment, and your viewpoint is knocked aside accordingly, leaving you open to more hits. This means you can't simply roll toward an enemy while absorbing hits like a tank. Moving from cover to cover becomes an indispensable tactic, which ends up making the fights feel more real, in spite of the fact that you can absorb an unrealistic amount of damage and can instantly replenish your health with med packs.

Medal of Honor uses the Quake III: Team Arena engine, and its graphics are generally excellent. It may not look quite as crisp as Return to Castle Wolfenstein, but it's no slouch. Character animations are especially good, as are more subtle effects such as lightning storms in the distance and trees swaying in the wind. It also features some of the most impressively destructible environments ever created. However, to ensure a teen rating--previous Medal of Honor games for the PlayStation were also rated T--the game is completely bloodless. If that turns you off, think of it this way: Maybe they took out the blood so it wouldn't obscure your view of the death animations, which are gruesome to say the least.

The graphics are very good, but the sound is phenomenal. Every level is thick with ambient sound effects. The voice acting is excellent, and there's plenty of it. Best of all, the Germans actually speak German. A lot. The music is fine and usually appropriate, but the game is smart enough to sometimes forgo music. The soundtrack for the Normandy beach level is nothing but gunfire, waves, screaming, and the overlapping conversations of groups of panicked soldiers, which ends up being much more effective than any score could have been.

Medal of Honor offers a few different multiplayer modes, including deathmatch and objective-based team matches. There's nothing really wrong with them, and the realistic World War II-era weapons are interesting, but there's nothing here that's overly compelling. Nothing like the marginal but significant advances to teamplay offered by Return to Castle Wolfenstein are present in Medal of Honor. Worse, there are some severe implementation issues. Rather than offer a built-in server browser, Medal of Honor relies on the GameSpy program for finding games. Quitting out to a third-party application every time you want to switch servers is a pain to begin with, but the developers have made it even more obtrusive by forcing you to sit through three uninterruptible logo animations every time the game loads. Three! Someone will probably come up with a workaround to this, but a workaround shouldn't be necessary. There's also already a rampant cheating problem. It's possible to enter god mode in multiplayer and become an invincible opponent or, worse yet, an invincible team killer. Complementing this problem is the fact that there's no clear menu-based voting system. Voting exists, but it's only available through console commands, and only then if you check the advanced console setting in the options menu.

So, if you're looking for the next great online game or a deep tactical shooter, Medal of Honor isn't for you. For anyone else, it's hard to recommend it strenuously enough. At a time when shooters seem to be evolving into two distinct kinds of games--either focused on realistic tactics or on arcade action--Medal of Honor represents the absolute best that action-packed, event-driven shooters have to offer.

Editor's note 01/25/02: Today a patch was released that addresses many of the multiplayer issues mentioned in this review. 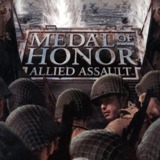