Those who aren't already fans of this series should look elsewhere, and Medabots fans searching for a fix are far better off watching the cartoon instead.

The Medabots franchise is most easily described as yet another sort of Pokémon clone. Here, though, young children befriend, raise, and then battle kid-sized robots rather than crazy critters. Based on the popular cartoon, Medabots Infinity allows you to assume the role of a boy named Ikki, who's trying to battle his way to first place in the Medafighter race at the Toru-Toru Land amusement park. The grand prize, bragging rights notwithstanding, is a free yearly pass to Toru-Toru Land and all the food you can eat while you're there. This is apparently all the motivation Ikki needs to repeatedly tackle the park's many attractions, while occasionally subduing the obligatory hapless bad guys--called Rubberobos--in the process. The premise may be rather cute, but the game is certainly not. Medabots Infinity exhibits aggravating gameplay and presents an imprecise camera, and the results are anything but fun.

You primarily progress through the game by clearing the stages of different areas in the park. Some of these stages have you navigating a forest or snowfield, some have you exploring a laboratory, and some have you negotiating the halls of ruins. In each attraction, your selected Medabot is plunked into the environment. A small grid-map appears in the corner of the screen, and a red dot on this map denotes your goal. You clear a stage by either reaching your goal or reaching your goal and then winning the Robattle that follows. The journey along the way is fraught with traps, natural hazards, enemy robots, cannons, and even lasers. Successfully completing a level nets you experience points that raise the base stats of the Medabot you use. If your Medabot gets destroyed before you clear a stage, you have to start afresh from the very beginning.

What makes the game's stages infuriating is the fact that there is no mapping system, and the goal area is often sealed off by several doors. Sometimes these doors are opened by stepping on switches that are scattered throughout the level, and sometimes these doors are opened by clearing missions that can be triggered throughout the level. You never know which of these is the case, so if you reach the level goal and find that a door is still locked, you must then retrace your steps, while again avoiding the traps, natural hazards, robots, cannons, and lasers that you recently escaped. However, since you have no map, you additionally need to have memorized where you've been and must spend time checking every last nook and cranny for the switch that you possibly missed. The switch may have even been in a room that you've already visited, or it may have been obscured by the camera views that can be absolutely wretched in this game, especially in indoor areas with high walls. Precise control of the camera is assigned to the D pad, which means that unless you want to stop to tilt your view in small increments--while getting pelted by cannon fire--you need to keep centering the camera behind yourself repeatedly. This can get tricky in areas with narrow corridors, 90-degree bends, and rolling boulders.

"Robattling" is the term used when Medabots fight each other, and you'll be fighting Robattles many times in goal areas or after certain story sequences. Your Medabot can attack with its arms or its head, or it can charge up what's known as "Medaforce" for an ultimate attack. While these battles could be a highlight of the game, the fact of the matter is that the AI for your opponents is pretty awful. If you tuck yourself into a corner and just charge up your Medaforce, your foe is usually either blindly attacking whatever's between you, or he or she is tooling around the arena for no reason. Unleashing a Medaforce attack, particularly late in the game when you've leveled up your Medabot, generally overcomes your enemy in one hit. The Robattles can also be terrible in the camera department, because the engagements are confined to small areas. As a result, the camera periodically shifts from its usual wide perspective to close-ups at ground level. Since the Robattle areas also contain the environmental hazards from the stages, the sudden change in perspective can make you abruptly step into a laser beam or waterway, which can lead to your demise.

The character models for both the humans and robots, on the whole, look good, albeit simple. They're brightly colored and distinct, and each Medabot has a unique look. The different stage areas are serviceable--as far as forest, snowfields, and ruins go--but there's not a lot of detail or texture to go around, so the environments end up looking cartoony rather than artistic. There's also not a whole lot of variety in the different stages, so once you've seen a forest stage, you know what to expect for all the other stages of that type. The game's music mostly consists of short tracks that are distinctive to certain areas or characters, and generally it's upbeat. While the character themes lend nice individuality to the people you'll meet, the music within the game's stages is decidedly bland and tends to loop often, which can be grating if you have to spend an extended period of time in one area. What little voice work included in the game is almost exclusively poorly delivered, though there are some bright spots. For instance, Mr. Referee's short, prebattle speeches are delightfully ridiculous but are perfectly overemphasized, and the Rubberobos' many inflections of the word "robo" can be adorable.

After all is said and done, there's little that Medabots Infinity has to offer. The game does support the creation of your own arenas (using game templates), in addition to two-person multiplayer and some downloadable Medaparts from the Game Boy Advance titles (Medabots: Metabee or Rokusho). However, the core game is mind-numblingly simplistic when it isn't just outright frustrating. While the story sequences that play out in the scenario mode can be entertaining, the game supplies nothing that you can't get from the television show--with far less hassle. Those who aren't already fans of this series should look elsewhere, and Medabots fans searching for a fix are far better off watching the cartoon instead. 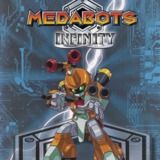 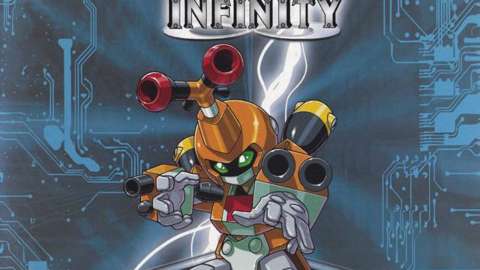 Those who aren't already fans of this series should look elsewhere, and Medabots fans searching for a fix are far better off watching the cartoon instead.