It's a fantastic introduction to the MechWarrior series for those who haven't yet discovered it, and should have enough depth to keep veterans involved for a long time.

The MechWarrior series is probably one of the most recognizable in computer gaming. Based on the Battletech pen-and-paper tabletop game, the series has become more popular on the computer than the original game ever was. The Battletech license has bounced between developers over the years, but with the fourth game in the series, it has finally come home. MechWarrior 4: Vengeance was developed by designers from FASA, the company that originated the board game and developed the Battletech virtual reality centers, where you could actually sit in a large capsule and play a multiplayer computer game with other similarly outfitted combatants. While MechWarrior 4 has returned to its roots in this sense, the latest action-packed addition to the venerable series is actually a departure from the previous games. It can be dangerous to meddle with a successful franchise, but in the case of MechWarrior 4, the changes are for the better.

The MechWarrior series focuses on combat between mechs, which are giant mechanized robots with human pilots. You control one of these mechs from a first-person (or third-person) perspective. Mechs come in different sizes and are armed with a variety of weapons, but the point is always the same: to blow things up. MechWarrior games are more complicated to play than shooters because of the skill required in piloting the mechs, but they aren't as technically involved as some pure military simulations are. In this respect, MechWarrior 4 does a good job of emphasizing action without compromising the basic military simulation feel. It's a difficult balance, but MechWarrior 4 pulls it off.

The graphics in the game are absolutely superb. A configuration utility lets you choose the exact options that will maximize the frame rate on a given machine, and those with a decent processor and a fast video card can enjoy beautiful terrain, detailed mechs, and spectacular explosions and weapon effects. It's been less than two years since the last game in the series was released, but MechWarrior 4 is still a significant step forward, graphically. The visual impact of the game is heightened by the fact that the mission maps are varied and appropriately decorated with trees, buildings, and the like. This sort of terrain looks much better than the relatively desolate maps of MechWarrior 3. Also, because of the addition of smaller vehicles such as tanks and missile launchers, MechWarrior 4 effectively conveys the sense that you're piloting something really enormous. In short, the graphics really enhance the game.

MechWarrior 4's audio effectively supports the game's stunning visuals with appropriate sounds of missiles launching, lasers, and a range of other effects that sound believably like futuristic weapons. You'll also notice the different sounds made by the mechs as they walk over different terrain like snow, desert, or swamp. If the game's audio has a weakness, it's that your lancemates who accompany you in battle aren't very active on the comm frequencies, and the lack of radio chatter makes the single-player campaign sound somewhat sterile. There are scripted broadcasts during the missions, but they only partially solve this problem. Of course, this isn't an issue in the game's multiplayer mode.

MechWarrior 4's predecessor was criticized because its single-player campaign was limited to about 20 missions, so the campaign was short and forgettable. This new installment has an expanded campaign that contains more than 30 missions in a variety of environments. You play as the sole heir of the House Dresari, and you are tasked with restoring Davion rule in your homeworld of Kentares IV. Starting from a secret base on a moon orbiting the planet, the campaign takes you through arctic, alpine, desert, and swamp environments before ending in a series of titanic clashes in an urban jungle. The cutscenes between missions are acted out fairly well and move the story along nicely, while the various lancemates available to choose from have well-developed personalities and notable strengths and weaknesses in combat. The key to the campaign is salvaging destroyed enemy hardware as you go along so that little by little you get to design new mechs for use in subsequent missions. The pace of salvage ensures that you won't have the really big mechs available to you until you need them. There is a good mix of offensive, defensive, and recon missions during the campaign, all with varied objectives, but none of them are particularly difficult. Experienced MechWarriors might be somewhat disappointed at the ease of the campaign, even on the highest difficulty level.

One of the biggest attractions of MechWarrior and the Battletech universe is being able to design your own mech and to test it against those designed by others in the proving ground of multiplayer combat. In MechWarrior 4, those who step into the mech lab to design their own mechs will find one significant change from the previous MechWarrior games: A mech chassis is not quite the blank canvas it was before. Instead, MechWarrior 4 restricts you to choosing from certain weapons on particular mechs by differentiating between types of weapon hard points. For example, lasers can now be placed only on laser hard points, and these hard points are restricted by size as well. A mech may have plenty of space overall but not have the correct type of hard point big enough to mount a gauss cannon.

This is a significant departure from previous MechWarrior games, which essentially let you equip a mech however you wanted as long as you didn't exceed the chassis' maximum weight allowance. Any weapons would fit on your chassis, and the balance was dependent on other players being able to design their own mechs to counter yours. MechWarrior 4's system imposes a certain level of balance from the outset, so some mech designs that worked in previous games won't be available in this installment. This is somewhat similar to FASA's approach in its virtual reality Battletech game, where mech selection was limited to a specified set of designs. But the game still comes down to building a better mech, and there is plenty of room to experiment. Bad mech designs will still be punished by skillful players.

Players who accept this conceptual change will find MechWarrior 4 to be a superlative multiplayer game. Even players using a relatively slow 56k dial-up connection will find themselves able to participate in massive 16-player battles without much noticeable lag. The game's multiplayer support is excellent, and joining a game is as simple as finding a server with a low-enough ping and connecting to it. There are many game types to choose from, with one of the most popular being team attrition, where two teams of mechs score points for killing each other and inflicting damage within a given time limit. Another is team destruction, where the focus is on kills only. There are other popular multiplayer games such as capture the flag and king of the hill, and jumping into a game is easy as long as there are openings in the game session. The multiplayer mode is definitely the high point of MechWarrior 4.

Besides the changes in the way the mechs are constructed, MechWarrior 4's mechs seem somewhat easier to pilot than those in the previous MechWarrior game. While there is definitely a learning curve to MechWarrior 4, new players will find that it's easy to get used to the controls. Nevertheless, combat in MechWarrior 4 is anything but a mindless shootout - it strikes a virtually perfect blend of pure action and simulation. Combat is fast, furious, and intense, but shrewd tactics and skillful piloting will greatly increase your longevity on the battlefield. And even inexperienced players can enjoy the team games, since having support from friendly mechs makes it easier to avoid being picked on - and even the greenest mech pilot can score the occasional kill by hunting down someone who's already been crippled by the opposing team. Regardless of your skill level, since destroyed mechs immediately respawn at full strength, you'll always see plenty of action.

The MechWarrior games have advanced far beyond their roots in the pen-and-paper game to carve out a large following among computer gamers. MechWarrior 4 makes it easier for new players to get involved but still preserves the essential elements that make fighting in these giant robots so intense and so much fun. It's a fantastic introduction to the MechWarrior series for those who haven't yet discovered it, and it should have enough depth to keep veterans involved for a long time. 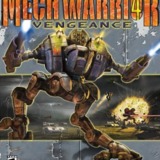