If you're going to buy one game with your Xbox Live starter kit, MechAssault is the one to get.

BattleTech and its offshoot, the MechWarrior series, form a deep, long-running science-fiction universe that has extended from tabletop games played with miniature figures into the realm of computer games and video games. The MechWarrior series represented the giant-robot-filled universe on the PC, while BattleTech centers around the country offered an even more immersive experience, allowing players to truly feel as though they were piloting gigantic, futuristic walking tanks. Translating the complex mechanics of BattleTech into manageable gaming experiences has met with mixed results over the years, as developers have struggled to find just the right balance of simulation, shooting, and strategic elements for these games. And while there have been previous attempts to simplify the game's inherently slow pacing for a more mainstream audience, none have fared better than Microsoft's new Xbox game, MechAssault. This new game delivers the best of what BattleTech's brand of giant robot combat has to offer in a highly accessible game that's especially fun when played against others online.

While the game's main draw is its online play, MechAssault does feature a single-player campaign. The story puts you in the role of a marooned dropship's last remaining mechwarrior, and you'll have to stomp through just under 20 levels while waging war against the fanatical followers of the oppressive Word of Blake. You'll launch raids on enemy emplacements, defend your dropship from attackers, and destroy just about everything you come across. The campaign levels are tied together by premission briefings and in-mission updates. The game's radar screen will always point you toward your next objective, so paying attention to the premission briefings isn't really necessary. You're given missions by your commanding officer and a lieutenant who is usually referred to as "briefing boy." The missions are generally well structured and entertaining, packing in a lot of explosive action.

However, the campaign simply pales in comparison with MechAssault's online component. The game has functional support for system link and split-screen play, but the game is at its best on Microsoft's new Xbox Live service. Your gamertag and Xbox Live account info will be seamlessly integrated into the game, so you'll simply have to choose a control scheme, select your account, and log in. MechAssault has the standard configuration for Xbox Live games, so you'll be able to search for specific games using quickstart or the optimatch feature. The game features a lot of different voice masks for vocal communication during play, although some are almost completely unintelligible.

Multiplayer MechAssault can be played by up to eight players at a time in a collection of different game types. The self-explanatory deathmatch and team deathmatch let you choose which arena you wish to fight in and configure winning conditions. Last man standing is available as is or in a team variant, and it serves as an elimination mode that goes until one mech or team remains. "Not it" classifies one player as "it." The player who is "it" is charged with the task of killing the other players for points. Other players are trying to kill the player who is "it" in order to become "it." The player with the most points at the end is the victor. The game runs very smoothly online and features a good selection of maps. MechAssault also has a built-in option to download new content, which will theoretically allow the developers to add new mechs, levels, or multiplayer game types to the mix at a later date. The selection of multiplayer options is already robust, so this feature may really add scads of replay value to the game.

The actual gameplay involves a simple control scheme that should be immediately familiar to Xbox owners, as it's very similar to the schemes used in first-person shooters like Halo. The left analog stick is used to move your mech around, while the right is used to aim. Each mech has three different weapons, and you can either cycle through them with one of the triggers or jump specifically to one of them using the appropriate face button. Some mechs are also able to fly short distances using jump jets, turn invisible, or dodge missile locks by dropping chaff. Naturally, lighter mechs move faster, but they lack the punch of the game's heavier units, which are armed to the teeth and have the thick armor to match. The different weapon loadouts include weapons found throughout the MechWarrior universe, including machine guns, lasers, various types of missile packs, the powerful but comparatively difficult to aim Gauss rifle, and the ever-popular particle projection cannon.

True to the roots of the series, overheating your mech in MechAssault is always a constant concern. Previous games to tackle the MechWarrior license have all tried to deal with heat distribution in different ways. The theory, however, is always the same: Firing weapons and using your jump jets generates heat, which you must allow to dissipate. Sure, you have unlimited ammo for all your basic weapons, but if you lay into the fire button and never let go, you'll generate so much heat that you'll eventually overheat your mech, which prevents you from firing until your mech's temperature drops back below a certain level. This adds some strategy to the gameplay without bogging it down, and it keeps confrontations from constantly boiling down into an exercise in circle-strafing.

Forty-foot-tall robots aren't exactly the fastest things in the world, so dodging fire is a bit more difficult than it is in your average multiplayer shooter. Ducking behind cover--which is plentiful thanks to the game's many city-based environments--is the number-one way to avoid damage, but skillfully timed jump-jet boosts and direction changes can also be used to dodge incoming homing-rocket and PPC attacks.

MechAssault definitely has the outstanding look that you'd expect from an Xbox-exclusive title. The environments look fantastic, the mechs all look and move extremely well, and the game sports some really great textures. The levels are filled with buildings that break apart in a spectacular fashion when you pump rockets into them, and the explosions are second to none. Even the small humanoids in power armor suits turn into satisfying puffs of fire when destroyed. Windowed buildings explode into a shower of glass when hit, and the game's light vehicles also explode spectacularly. But the best explosions come from the mechs themselves. When defeated, mechs go critical, falling over and detonating in a white-hot blast followed by a shockwave and a messy, smoke-filled fire cloud.

The game also has a lot of great little touches. You'll see the different mechs noticeably deteriorate in combat, emitting smoke after taking a few hits, sparking at moderate damage, and practically bursting apart at the seams when near defeat. The only weird graphical thing the game has going on is the fact that its sense of scale doesn't seem quite right, as the mechs seem to move a bit too nimbly. While you're supposed to be cruising around the levels in a 40-foot-tall walking tank, the mechs look more like miniature models walking around a world filled with tiny buildings. The buildings general lack of definition also lends to the game's odd sense of scale.

MechAssault has loud, bass-heavy sound effects to match its wartime graphics. All the weapon fire sounds fantastic, and the amazing explosions are synched up to some really great-sounding audio. Like the rest of the Xbox lineup, MechAssault has Dolby Digital support, and the game uses this support better than most Xbox games. The game's interactive soundtrack is a helpful in-game tool. The music is fairly subtle throughout most of the game, but whenever there's another enemy mech in the area, the soundtrack picks up and starts to rock. The heightened rock soundtrack really adds to the game's intensity, and it lets you know when to expect contact with the game's tougher campaign-mode foes.

MechAssault isn't an overly complicated game, and this makes it a perfect choice for the Xbox Live launch. Once you get used to the game's pacing, it's easy to get good at controlling your mech, which is, of course, invaluable when you're playing online against other experienced players. The well-done campaign mode, the terrific presentation, and the variety of online modes all combine to make a truly superb final product. If you're going to buy one game with your Xbox Live starter kit, MechAssault is the one to get. 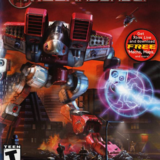