While the increased competition for Xbox Live shooters makes Lone Wolf look a little more like one of the pack than its predecessor, the core action is still simple and fun.

Back before all the Ghost Recons, Halo 2s, and Crimson Skies, there was one superb standout for Microsoft's Xbox Live service: MechAssault. Day 1 Studios' big mech third-person shooter was among the first games available for online play on the Xbox, and for quite some time it was one of the best. Now, Day 1 is back for a second round with MechAssault 2: Lone Wolf. While the increased competition for Xbox Live shooters makes Lone Wolf look a little more like one of the pack, the core action is still simple and fun.

The single-player campaign in MechAssault 2 comes across as a bit larger in scope than that of the original game, but as you play through it, it feels more and more limited. You play as the MechWarrior, a silent tough guy who's rolling around the universe in a dropship with a female commanding officer and a hyperannoying technical whiz kid-brother type. As fate would have it, you get caught up in a war surrounding a series of powerful data cores that, as you might expect, have the ability to power a massively devastating weapon if they fall into the wrong hands. In MechAssault 2's case, the wrong hands belong to a fanatical cult called the Word of Blake. Throughout the game you'll stomp out several Blake encampments, blow apart a bunch of mechs, step on a billion tanks, and blast away at tunnels to stop the flow of reinforcements.

Lone Wolf's single-player campaign feels pretty short, and a big part of that feel is because you're basically doing the same thing from start to finish. Most of the time, you're merely moving from point A to point B, taking out all opposition as you go. Your opposition comes in the form of turrets that barely hurt you, tanks that you can kill with a quick stomp from your mech or two or three shots from just about any weapon, and enemy mechs, which are easy to beat provided you don't take on more than two of them at a time. On top of that, destroyed mechs leave behind health and weapon power-ups, meaning that there's rarely any real need to employ tactics beyond circle-strafing to succeed. Even the game's final boss is merely a basic exercise in precision shooting while strafing. The only interesting tactical enhancement to the game also seriously upsets the campaign's balance.

The big new thing in MechAssault 2 is the barely-larger-than-human-sized battle armor. This suit may be dwarfed by the game's other, bigger mechs, but what it lacks in size it makes up for in speed and a neat little twist: the neurohack. Neurohacking lets you grab onto an enemy mech, and then by following a series of button presses, you can disable that mech, jettisoning its pilot and sending it crashing to the ground. At that point, you can hop out of your battle armor and into the new mech, if you wish, but neurohacking is the sort of devious fun that you'll want to do again and again. The battle armor comes up in several spots during the single-player campaign, and while the game's characters are always telling you to neurohack one mech so you can trade up for some firepower, it's actually much easier to just run around the map and jack every single enemy mech to quickly eliminate your most powerful opposition. As a result, the battle armor feels overpowered when you're playing alone. But playing alone hasn't really been the strong suit in either of the two MechAssault games.

MechAssault 2's biggest draw is its multiplayer. The modes and basic structure from the first game return here, and you can play multiplayer via system link, split-screen, or Xbox Live with up to 12 players. Modes include destruction (deathmatch); team destruction (team deathmatch); last man standing; last team standing; not it (where only one player scores points for kills, and the other players attempt to gang up on that player to become "it"); capture the flag; check it (where you must capture and defend a series of checkpoints); snatch it (collect a series of items and bring them to your base); and base war (a generator in each team's base must be protected from enemy attack). Offline, you can play in grinder mode, which is a co-op gameplay type that pits players against a never-ending stream of enemies.

The variety of modes and maps is good enough to keep you going for quite some time, and the action is fun. While its presence in the campaign is minimal, the addition of a VTOL aircraft allows players to take on a support role by carrying other players to the front lines or dropping power-ups to resupply teammates. And, with the ability to steal other mechs still intact in multiplayer, you're never really sure which mech you're going to be bringing into battle. The game has a variety of mech designs and weapon loadouts, ranging from basic tanks and little Elemental armor suits all the way up to gigantic, PPC-spewing machines. All this gives the game an interesting, unpredictable feel, because you'll have to be adept with more than just one or two mechs to truly succeed in MechAssault 2. This is a great change from the first game, where you selected a mech prior to the match, and were stuck with it throughout the whole match. Now, you can't even select a mech--the map determines which vehicles are available on the battlefield. While that may sound a little limiting, it actually adds more variety and makes the game feel a little more balanced.

You can play all of these modes on their own using the standard Xbox Live game finding and configuration, or you can dig into the game's new conquest mode, which attempts to wrap all of these different modes together into one meaningful conflict. In conquest mode, you associate yourself with one of the houses of the inner sphere, and you attempt to sweep across all of the planets to rule as much of the inner sphere as possible. This gives you a big map, with color-coordinated planets to show who currently controls them. Each planet has its own map and game rules, so you'll get a chance to play through all of the game's team modes here. When you log in and look at the conquest map, it'll show you which planets are currently under attack and it will let you get involved in any of your house's current conflicts. This is a pretty cool, unique idea that should go a long way with fans of MechAssault's team-based modes. MechAssault 2 also has downloadable content support, allowing for the possibility of new maps, modes, and mechs.

Visually, MechAssault 2 does great work with explosions and other destruction-related effects. The best part about the game is when an errant shot strikes a nearby building, causing a great deal of glass to shatter out of the windows. Slightly more-focused pounding will send buildings crashing to the ground in a similarly impressive fashion. Exploding mechs detonate in a blinding flash that warps the area around it in a really cool way. Additionally, the mech models look good, and the game also does a pretty good job at showcasing the sense of scale between man and machine in the few times that you're on foot or using the smaller battle armor suit. Aside from these things, though, MechAssault 2 doesn't look all that great. The environments are decent, but many of the textures used are fairly blurry. Fortunately, the game mostly runs at a smooth frame rate.

While you stomp around and blow stuff up, you'll be treated to the game's rocking soundtrack, which features songs from both Papa Roach and Korn. If you're a fan of either of those bands, chances are you'll like the game's faux hard guitar rock. The music sounds like it's trying to add a little extra aggression to the mix, but it comes across like it's trying a little too hard. Boss fights are punctuated by the licensed songs, and you'll also get to hear one over the game's attract mode video and end credits. Most of the game's sound effects are great. The punch of weapons fire, explosions, jump jets, and the stomp of your mechs walking around all sound as they should. The lone missing effect is a good, deep bass hit when your jump-jetting mech crashes to the ground. The game makes heavy use of voice acting in the campaign, and most of this work is pretty bad.

The first MechAssault was a superb game in its day, but it also benefited from being the first awesome multiplayer game available for the system. Now that some time has passed, and things like "quickmatch" and "optimatch" are synonymous with the multiplayer experience on the Xbox, MechAssault 2 isn't quite as impressive. The mech-jacking and the variety of team-based modes available are cool, but the relatively slow pace makes the rest of the game feel like a plodding, fairly standard third-person shooter. 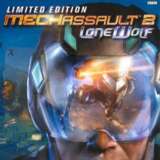