McGrath vs. Pastrana Freestyle Motocross is the primary candidate for an award no video game wants to win, the uninspired game of the year award.

Usually when a series has a bad rep, the game's publisher steps in, attempting to push the developers to add features or clean up the graphics for future releases. Acclaim's McGrath Motocross series, on the other hand, has gradually deteriorated over time, finally reaching a state of true dilapidation in this newly tweaked PlayStation installment. McGrath vs. Pastrana Freestyle Motocross is the primary candidate for an award no video game wants to win, the uninspired game of the year award.

McGrath vs. Pastrana features an adequate number of gameplay modes. The championship series lets you take control of either McGrath or Pastrana on your quest to conquer the 125cc, 250cc, and 250cc classes in both the racing and freestyle events. The freestyle events allow you to roam the courses at will, searching for steep hits to boost off and rack up stunt points. As you might expect, the races simply require you to cross the finish line in first place. The game boots up with an auto jump feature enabled, and while it's handy for the freestyle courses, it just slows you down in the races. After you defeat an engine class, you go onto the next one, and eventually the custom and open classes become available. In addition to the championship mode, you may play single races, which are handy for finding shortcuts, and the time attack mode, where you may race against one of your ghost laps. McGrath vs. Pastrana also features a card mode, where completing certain objectives opens up new bikes and tracks - similar to the challenge modes in EA Sports games. If you have a friend handy, there is a two-player mode available for head-to-head competition.

The majority of the 30 possible tricks are made up of the usual can-cans and supermans. There are also some tricks to pull that have yet to be landed by real-world riders such as the backflip and the barrel roll. Performing tricks is simple. A push of the analog stick and a press of the circle or triangle button are all it takes. As long as you release maneuvers before succumbing to gravity, they are always landed. It doesn't matter if you land at an awkward angle on a slope or smash into a building. Even while racing, it's nearly impossible to fall off your bike. If you take a turn too wide, it's possible to ride up on the track walls without dropping your speed. Not that a lot of time is spent off the road. The bikes control so heavily that the brake button is never used. It's possible to ride like a maniac and never be tossed off the bike. It's this lack of consequence for poor playing that prohibits any sense of tension from ever showing itself.

McGrath vs. Pastrana stutters along like Gomer Pyle on amphetamines. The frame rates are so poor that the entire game has a jerky feel to it, and the overall package comes off as erratic. This is in addition to the fact that the game engine has to bust its tail to draw 100 yards of terrain. Trees magically appear a mere 30 yards away, and the coastline gradually materializes while driving along the beach. The animations for tricks contain so few frames of animation that your mind is forced to draw in the missing parts. Everything from the riders to the terrain is pixelated, blocky, and grainy. There are nine tracks to exploit, including real-world locales such as Loch Ness and Yosemite, and each comes complete with shortcuts and branching trails. The texture sets vary for each course, giving them their own specific look, but the excessive length of each course results in a great deal of texture repetition. Z-Axis' patented skeletal dynamics system allows for some realistic reactions to crashes, but again, there aren't enough frames of animation for them to be believable.

The music consists of driving guitar rock that fits properly with the subject matter, but it's impossible to hear it over the screaming bikes, which sound like Weedwackers on nitro. It doesn't matter whether the bike is airborne or its tires are digging into the soil, the same two-second engine sound loops over and over. Making matters worse, there are only two sliders to adjust the sound, so it's difficult to attain a desirable mix.

McGrath vs. Pastrana Freestyle Motocross continues the legacy of drab, dull gameplay and graphics established by previous versions of the Supercross series. While the gameplay offers a few new twists borrowed from other extreme sports video games, their implementation lacks proper execution, resulting in a game full of promising bits and disappointment. McGrath vs. Pastrana has good intentions, but the fact that there are only two riders to choose from pretty much says it all. There aren't many good motocross games for the PlayStation, and McGrath vs. Pastrana isn't going to change that anytime soon. 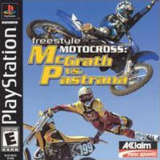