If you're looking for something to play online, Maximum Pool does the job, albeit without any bells or whistles.

Maximum Pool contains only a few different modes. You can play exhibition, practice, and online games. A quickstart mode lets you pick up with the same game type and opponents as the preceding game. Picking exhibition lets you play several pool variants, such as straight pool, eight ball, nine ball, and cutthroat, with either human or computer opponents. There are five opponents to choose from, but the only major difference between the opponents is what faces pop up between shots to give you encouragement. Amy seems unsure of her ability, but she loves the game. Brad says nice shot, but he does so while gulping uneasily, as if losing would seal his fate. Buddy... well, Buddy is a dog. He barks at you between shots. Beating the computer opponents on the different difficulty settings can unlock other, more obscure games, such as 24 cents, a game played on an oddly shaped table.

Graphically, Maximum Pool isn't much to look at. The balls are round, the table looks OK, and you can rotate the camera angle around at will. The different backgrounds are pretty unimpressive, and the game gets pretty choppy on hard breaks. The music isn't very good, but Maximum Pool manages to sound just like a real pool table - balls hitting off each other clack rather loudly and so on.

The default setting shows small dotted lines connecting the end of the cue and the object balls. It has a distance limit, so long shots are harder to line up, but more often than not, there's no question when it comes to aiming your shots. The computer seems to use this logic as well, as it can run a table full of easy shots, even on its most novice setting. This makes most of Maximum Pool a pretty brainless encounter. There's no timing involved in hitting the balls, either - simply push up and down on the D-pad to select your shot strength and hit A to take the shot.

The game's obvious draw is its online play. As something like pool isn't terribly taxing on a modem connection, the game is essentially lag free, and it's just as good as playing with a person next to you. You can send chat messages back and forth, a feature that is made a million times easier with the Dreamcast keyboard. Maximum Pool DC is compatible with the PC and Mac versions of the game, giving you a much wider online audience to choose from.

Maximum Pool doesn't really max out the Dreamcast in any way, shape, or form. But then, Average Pool wouldn't be nearly as inviting a title. If you're looking for something to play online, Maximum Pool does the job, albeit without any bells or whistles. 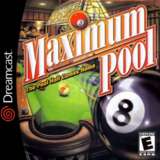