The graphics are simple yet endearing, the gameplay is repetitive but solid, and the game's design is a throwback to the 16-bit era.

Maximo began its life as a Nintendo 64 game, but its development quickly shifted to the PlayStation 2 when it became obvious that Nintendo's console was losing its legs. Based loosely upon Capcom's Ghosts 'N Goblins series, this 3D platformer's game design would be right at home in most any game from that era--making it appeal to the old-school set. But players who have just jumped on the video game bandwagon with the PlayStation may become frustrated with Maximo's detail-oriented gameplay and repetitive nature.

You play as Maximo, a young knight who finds his kingdom in chaos upon returning from war. Maximo's sweetheart has been kidnapped by his right-hand man, and he must rescue his damsel in distress using just his sword and shield. With five primary levels split up into nearly 30 sections, there's plenty of territory to traverse before the game is complete. Thankfully, each section contains several checkpoints that can be triggered. Without this feature, completing the game would be nearly impossible. What makes Maximo difficult are its health and save systems. Similar to games from days since passed, it only takes a few hits from enemies before Maximo meets his doom. As Maximo is attacked, parts of his armor fly from his body until he's dressed in nothing but his boxer shorts. Once stripped to his skivvies, just a few more hits and Maximo is toast. Replenishing Maximo's armor is an arduous task, and the player is forced to memorize the location of each enemy and the attacks required to dispose of it in order to reach the next armor power-up and sustain life. You'll often play for up to a half hour before coming upon a checkpoint or an opportunity to save. Needless to say, dying just before reaching a checkpoint or completing a stage will anger even the most patient of players.

If Maximo does meet his fate, he may pay the Grim Reaper death tokens to continue. Death tokens are awarded after 100 blue spirits have been collected. The spirits are hidden throughout the levels in stone canisters that yield five spirits at a time when destroyed. Initially, you will be able to bribe the Grim Reaper with just a single death coin, but as the game wears on, it will cost several coins to convince old man death to give you another chance. Thanks to this unforgiving system, you will often have to replay some sections of the game multiple times before completing it or start the game over from the beginning to better manage your death tokens. For those who have spent a great deal of time with older games that may not have a save system, Maximo will be a nice trip down memory lane. But the PlayStation generation, which is used to being able to save anywhere at any time, will experience some frustration. Maximo must also collect koins throughout his journey which are used to save the game and buy new items, so simply avoiding confrontation isn't an option.

Maximo's repertoire of moves is nothing to scoff at when compared with other games in its genre, but things can still become repetitive. His base moves include a double jump with a downward slash, a basic sword slash, a power slash, and a projectile attack using his shield. Maximo acquires special moves throughout the game, but they are more complicated to pull off and are seldom required to complete a level or defeat a boss. Even so, using them can be effective and impressive at the same time. Maximo can also power up his sword with four different elements that will increase its capabilities. Once his sword is powered up, it becomes much easier to dispatch enemies, but its enhanced abilities only last for 20 strikes, so it's important to make them count. Regardless of how many special powers Maximo accumulates, the majority of the enemies can be dispatched with the same series of moves. Unfortunately, the gameplay starts to become repetitive once you're halfway through the game, and there are no minigames to break up the monotony. The inclusion of just a few bosses doesn't help the situation, and even they can be dispatched a bit too easily. Perhaps the most frustrating issue with Maximo's gameplay is that his sword will often clang off walls or other objects instead of striking the intended enemy. When this happens, he is left vulnerable for a short period of time, which gives enemies the opportunity to sneak in a sword slash. Regardless of these shortcomings, Maximo still has an addictive quality that keeps you coming back for more. Trying to make it through each section of the game without dying can become an obsession, and the player is rewarded with a nice feeling of accomplishment when each section of the game is complete.

Maximo has a nice, clean look, but there are several aspects of its graphics that give its Nintendo 64 heritage away. The environments are particularly telling due to their simplistic construction--there is very little in the way of architectural detail. However, the character models used for the game are anything but simplistic. Maximo looks great--featuring some impressive head tracking--and the enemies feature the same polished design. Unfortunately, there are just a handful of enemies in the game, and continually fighting the same ghouls can bog the game down in monotony. Special effects such as volumetric fog are used to great effect, but others such as the real-time lighting are almost distractingly poor. Maximo's shadow is jagged and pixilated, and it looks out of place among the rest of the simplistic-yet-cool visuals. Though lacking in detail, the worlds themselves are fairly large and are bolstered by the stereotypical snow, swamp, and graveyard motifs. The simplistic environments aid in keeping the frame rate consistent, and in turn, the animations are also smooth. After completing each of the primary sections of the game, the player is rewarded with FMV sequences that move the plot forward, but since they're used so little throughout the game, they can make the experience a disjointed one. The primary issue with Maximo's graphics is its finicky camera. It accomplishes the task at hand while in open areas, but when adventuring through the game's many cramped environments, it can present issues. Enemies attack from all angles, and the camera is so slow to respond to commands that you're often struck by enemies you can't even see. If Maximo were able to absorb a great deal of damage this wouldn't be a glaring issue, but death occurs far too often thanks to the lethargic camera--making an already difficult game even more confounding.

The sound in Maximo gets the job done with few frills. The voice acting for the FMV sequences is quite convincing and the sound effects are excellent, but the music (though appropriate and catchy) repeats throughout the game's entirety. A wider selection of tracks would have been a welcome addition, and a greater variety of sound effects for the same actions would have aided in increasing the game's level of immersion.

Maximo is an entertaining 3D platformer with a few rough edges that keep it from attaining greatness. The graphics are simple yet endearing, the gameplay is repetitive but solid, and the game's design is a throwback to the 16-bit era. If you have a short attention span or require run-and-gun action from your video games, Maximo's plodding gameplay will be a turnoff. But if you're a detail-oriented person or a fan of games from a generation ago, Maximo is more than worth your hard-earned dollar. 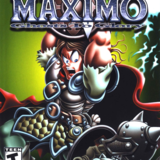