This satirical shooter is fun, but it never takes advantage of the potential of its parodies.

The Matt Hazard series of games is built on the premise that even the most popular franchises are not sacred cows. Considering that the industry frequently takes itself quite seriously, the idea of lampooning all that is dear has a certain charm to it. However, as noble as Matt Hazard's motives may be, the games in which he stars fall far short of their goal. Matt Hazard: Blood Bath and Beyond places the wisecracking hero in a 2D shooter reminiscent of Contra, and though the action rarely ventures beyond the scores of games that have come before it, it is challenging and diverse enough to keep things interesting through the two hours it takes to finish your quest. But because Blood Bath fails to take advantage of its parody material, it loses any chance to stand out from the crowd.

Matt Hazard has to rescue the person he holds most near to his heart: himself. Specifically, an 8-bit representation of himself, whose death would change history, causing the present-day Hazard to die an untimely death as well. It's a convoluted story that never expects you to accept the ridiculous premise. Blood Bath takes frequent jabs at its own inane logic, poking fun at the ludicrous situation and trying to figure out if time travel really can change the present. In fact, the only humorous moments in Blood Bath are when the game makes fun of either itself or its predecessor, Eat Lead. There are many jokes about the poor sales and chilly critical reception of the first game, and those instances of self-ridicule make the game more endearing and humorous than the by-numbers action and uninspired parodies do.

The eight levels play out in typical shooter fashion. You walk from left to right and spray bullets wildly while trying to avoid the slow-moving attacks from your countless foes. You can freely aim by holding LB and moving the left stick, which works well but feels clunky compared to last year's Shadow Complex, in which you could aim while running by swiveling the right stick. There are moments in which enemies will rush you from the background, and you can aim your sights that way with a tap of the trigger. It's not a particularly new idea, but it adds some depth to the typical shooting action, forcing you to keep your eyes darting across the screen to identify any potential threat. Weapon power-ups give the tried-and-true action a bit of variety. The assortment of machine guns, rocket launchers, and shotguns let you dispose of your enemies in deadly ways, but it's the flamethrower that is the gem of your arsenal. It lights up your attackers like campfire marshmallows, leaving behind a gooey residue that probably shouldn't be eaten.

A giant boss character waits at the end of each level, giving you a worthwhile ending sequence to all this bloody carnage. The bosses are purely pattern based, but they move quickly and have powerful attacks, forcing you to stay focused the whole time or you will meet a fast, and very violent, end. The most ridiculous of these battles is against a giant robotic lighthouse. There is no explanation for why someone would have equipped a lighthouse with legs and missile pods, but it sure is fun avoiding its deadly anchor and shooting its missile right back at it. If you aren't quick on your toes, you will die frequently at these bosses' hands, which makes the game pretty darn hard. On the higher two difficulty settings, your continues are finite, so you will need to start over from the beginning of the level if you fall to these giant monstrosities. The challenge never seems unfair, and it's rewarding to make it through a particularly difficult level unscathed and finally vanquish a boss who tormented you so thoroughly in the past.

The different levels draw inspiration from popular video game franchises, letting you walk through familiar backdrops that will evoke a pang of nostalgia when you think back on your time spent with those vastly superior games. The first level re-creates the undersea utopia from BioShock, another places you in the eerily clean city from Mirror's Edge, and a third level mixes Team Fortress 2 and Super Mario Bros. for some unexplained reason. The parodies are not always clear (the pirate-themed second level could be mimicking anything from Tomb Raider to Pirates of the Burning Sea), but it is neat when you recognize a game you previously enjoyed. The problem is that Blood Bath doesn't do anything with this material. Sure, it's interesting to blast through Rapture, but there aren't any jokes about the Little Sisters or Big Daddies. The art style is the only thing Blood Bath shares with BioShock, which feels like a missed opportunity. If the end boss destroyed itself with a golf club or Matt Hazard made fun of objectivism, the parodies would have been a lot more entertaining. As it is, the parodies are strictly visual and largely forgettable.

Although the adventure can be completed in less than two hours, there is a little bit of replay value for those who enjoy collecting. Every level has three hidden cartridges, and by nabbing them all, you unlock information on unreleased games Matt Hazard starred in from his fictional past. There is an offline-only cooperative mode as well, and though it doesn't change the action at all, it is certainly more fun blasting waves of enemies with a buddy than by your lonesome. The standard shooting in Matt Hazard: Blood Bath and Beyond is solid, but there is little in this package to entice those who have already torn through thousands of enemies in dozens of other games. The parodies are the one element that could have been interesting, but they are implemented in such an uninspired way that they serve only as a reminder of how much cooler this game could have been. 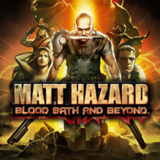