The controls and general feel of Mat Hoffman's Pro BMX make it a satisfying product.

Support for two players via a link cable is the greatest addition to this handheld incarnation of the Mat Hoffman series because it lets friends duke it out in trick, HORSE, and graffiti competitions. However, the single-player modes offer the greatest overall challenge because each competition--be it career, tournament, or time trial--focuses on a different aspect of the BMX experience. The six courses of career mode ask you to perform a variety of tasks, which aren't always trick-based, to earn magazine covers. The tournament option, using the same six courses, pits you against the seven other riders in a combo run competition. Time trial is the final single-player mode. It challenges you to complete a series of four ramp-laden straight runs in a set amount of time, while also performing tricks to increase your overall time allotment.

For the above events, you can choose from eight riders--including Mat Hoffman, Mike Escamilla, and Cory Nastazio--and each has inherent pros and cons. Character differences are subtle, but they can make a difference. For example, Escamilla has limited airtime, which makes triple-trick combos difficult, but he rarely takes a spill, a fact that makes grinding and fufanus a breeze. In all, there are approximately 40 different tricks to learn and combine, as well as signature moves for each rider. An onscreen gauge fills whenever you perform a trick. When you fill it completely, you can perform a high-flying superstunt that surrounds your rider in shadows and accrues major points. Since the tournament mode emphasizes scoring, the successful chaining of tricks and performance of signature moves is important. Thankfully, performing tricks is a breeze, even though the game doesn't take advantage of the GBA's L and R buttons.

Although similar to Tony Hawk's Pro Skater 2 in visual style, Mat Hoffman's Pro BMX doesn't aim for extremes in terms of detail or interactivity. Courses have ramps, pipes, boxes, and a few assorted obstacles here and there, but nothing on par with the oilcans and airplanes found in Tony Hawk. This isn't really a complaint, however, as the courses are nevertheless lifelike and colorful. There are even subtle nuances, such as lens flares and dust clouds, which add further realism to the in-game world. Furthermore, the abundance of bike and rider animations tied into the simplified trick system gives way to a visual representation of stunt biking that's not too far from reality--albeit without the broken bones.

Since BMX stunt biking is very much a rider-oriented sport, it makes sense that the majority of audio in Mat Hoffman's Pro BMX centers on the athletes. Pedaling sounds, painful-sounding spills, and a vast array of tire-on-metal sound samples define the overall experience, while a selection of fast-paced background music underlies the action. The soundtrack is quite far removed from that in Tony Hawk's Pro Skater, which has more variety, but it's not bad by any means--and this isn't exactly a skateboarding game either.

For those seeking a handheld stunt-biking game, Activision's release of Mat Hoffman's Pro BMX for the Game Boy Advance is a good choice. By taking an already solid trick system and improving everything about it, developer HotGen has created a solid product. 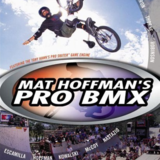 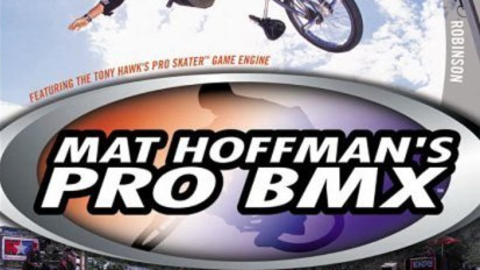 The soundtrack rivals Wipeout XL for the title of best licensed soundtrack ever.