The history of gaming is full of poor movie adaptations, and the Mask of Zorro represents one more.

Following in the footsteps of the 1998 feature film, Sunsoft's Mask of Zorro follows the plight of one hero's battle to vanquish a ruthless tyrant. The year is 1841. Spanish control over California is nearing an end. The territory is in the hands of Governor Don Rafael Montero to make sure the changeover goes smoothly. Unfortunately, Montero cares little for his people and their prosperity, seeking only to maintain his riches and amass greater wealth from the transition. The one person who could stand against him, Don Diego de la Vega (aka Zorro), has been imprisoned for 20 long years. Despite this fact, however, a new Zorro has appeared - picking up where the last left off.

The Mask of Zorro for the Game Boy Color follows the storyline of the film to the letter, from the introduction of the new Zorro, to the exposition of his colored past, to his blossoming relationship with Montero's daughter, the beautiful Elena. Unlike the film's, the video game's visuals are nothing special. The game's levels only differ with respect to color choice and minor background characteristics. A church may be white or a mansion gilded in gold, but all have the same ropes to climb and posts to swing from. If you've always wondered how Antonio Banderas or Catherine Zeta-Jones would translate onto a handheld screen, look elsewhere. The sprites are so lacking in terms of detail that you really aren't sure if you're playing as Batman or Zorro. Elena may as well be a satin-clad transvestite. For that matter, no one has any eyes! This last complaint may sound silly, but considering each face is at least five pixels in diameter, the programmers could have given them eyeballs to see with. Enemy and item variety is also painfully minimal. You'll encounter eight enemies throughout the entire game, and with the notable exception of boss characters, they're all identical twins. At least the game's single music track and diverse voice snippets are there to keep you company.

On a handheld, quality gameplay can make up for disappointing visuals. Unfortunately, Mask of Zorro barely makes the grade. You can thrust, slash, and parry with your sword, but none of these actions effectively differs. By holding down the A button and holding toward an enemy, you can usually come out of a battle with nary a scratch. The game's villains are simply dumber than bricks, and what's worse, they respawn frequently. Should you backtrack more than a centimeter, they'll all reappear. Don't fret, though, the game features endless continues. Should you perish, you need only repeat the level from the last transition point. The only thing worse than endless continues and poor attack mechanics is bad jumping, and Mask of Zorro epitomizes that. You never know where or when you're going to land, as jumps are full of hang time and seem to end randomly. Not only that, but if you keep the button held too long, you may jump repeatedly. Later levels require you to swing from large series of wooden posts, but due to the game's horrid jump mechanics and poor collision detection, you probably won't make it that far.

The history of gaming is full of poor movie adaptations, and the Mask of Zorro represents one more. Horrible control and boring gameplay make the game's nine-level quest seem like an eternity. Furthermore, since the game has zero secrets, there's no reason to replay it once you've beaten it. Saffire is to be commended for including over two minutes of digitized speech straight from the film, but otherwise, Mask of Zorro is nothing special. 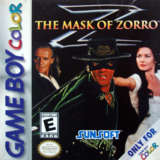 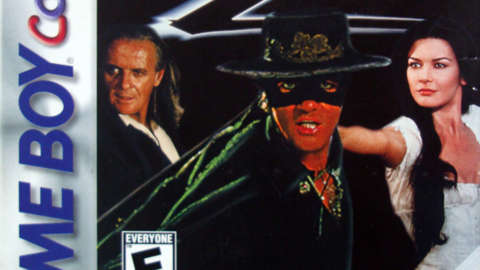 The Mask of Zorro

The history of gaming is full of poor movie adaptations, and the Mask of Zorro represents one more.