While I wouldn't call Marvel vs. Capcom the most balanced fighting game in the world, it makes up for its shortcomings by simply being a whole lot of fun.

OK, let's bypass the intro to this review and make one thing perfectly clear. The gameplay score in this review is based on playing the game with Sega's arcade-style joystick, which is sold by Agetec here in the States. If this joystick didn't exist, and the only option was the standard Dreamcast controller, it's likely the gameplay would have gotten a lower score.

Marvel vs. Capcom is the latest incarnation of Capcom's Street Fighter vs. series. But here, instead of limiting the characters to X-Men or Street Fighters, Capcom has taken characters from all over the Marvel and Capcom universes. Marvel is represented by new additions like Venom and Onslaught, as well as fighting-game veterans like Spider-Man, Captain America, and Wolverine. Capcom's lineup includes Street Fighters Ryu, Chun Li, and Zangief, but also include non-fighting game characters like Captain Commando, Strider Hiryu, and Mega Man. The result is an ultimate (albeit a bit condensed) lineup of fighters from all over the place. This cross section of comic book heroes and video-game characters gives the game a truly new and diverse feel, even if the gameplay hasn't changed too much since the last Capcom vs. fighting game, Marvel Super Heroes vs. Street Fighter.

The matches are still fought in typical tag-team fashion. You can swap between your two fighters at any time, letting one hop out and regain a little life. There are also team-up attacks, where both fighters hop out and do a super move together, resulting in big damage if the attack connects. New to Marvel vs. Capcom are helper attacks. After picking your two fighters, you're given a random helper character, whom you can call out for a quick attack a few times during the match with a quick press of both medium attack buttons. The helper characters are also taken from various places in the worlds of Marvel and Capcom. Some of the more notable characters include Marvel characters like Jubilee, Cyclops, and Colossus, while Capcom's helpers include Arthur from Ghosts N' Goblins, the Unknown Soldier from Forgotten Worlds, and Devilot of Cyberbots and Super Puzzle Fighter II Turbo fame. There is also a new team-up attack, which behaves a bit like Street Fighter Alpha 2's custom combos. When you execute the attack (which takes all three levels of your super meter), your backup character hops out, and you control both your characters at the same time. You have an infinite super meter while you're double teaming your opponent, so you can simply start the frenzy, then bust off supers as fast as you possibly can. There are also little differences in some of the returning characters. For instance, Ken and Akuma aren't in the game. Instead, you pick Ryu and change into a Ken or Akuma "mode," which changes the color of Ryu's suit and gives him all the moves of the character he's emulating. Similarly, Zangief can change into a robot version of himself, which can breathe fire, yet can't block.The game has all the modes you've come to expect from a Capcom fighter, including the standard arcade, versus, survival, and training modes. However, there's one mode that really sticks out as being innovative in a "hey, why didn't they think of that sooner" sort of way. The cross-fever mode is a four-player mode that lets players one and three fight against players two and four. So when you tag out to your other fighter, your teammate takes control of the fight. This also comes into play during the custom combo-style attack, because each character is controlled by a different person.

Graphically, Marvel vs. Capcom looks terrific and once and for all proves that the Dreamcast can definitely do justice to 2D games. Even when all four characters are onscreen, filling the arena with projectiles while the background goes crazy, the game doesn't slow down a bit. The utter lack of load times (save for a short load before fighting Onslaught's second form) keeps the game moving along at a nice, brisk pace. The soundtrack, which comprises music from all sorts of different Capcom games (the Strider theme song, Mega Man music, and so on) is unmatched. The game's sound effects are also crystal clear and extremely well done. The copious use of stereo separation helps make the audio perfect.

While I wouldn't call Marvel vs. Capcom the most balanced fighting game in the world, it makes up for its shortcomings by simply being a whole lot of fun. After pumping out inferior vs. games for a few years now, Capcom has finally gotten it right. Marvel vs. Capcom is everything you'd expect from an over-the-top, ultra-flashy fighter, and then some. But do yourself a favor and pick up a few joysticks instead of punishing yourself with the inferior standard pad. The joysticks are definitely worth the extra money, and really give you the feeling of having the arcade machine in your home. 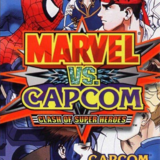