This clumsy and unsatisfying sequel is a major step backward.

Marvel Alliance 2, an action/role-playing sequel set in the Marvel comics universe, starts with a good foundation: the excellent Civil War storyline. This storyline provides a fitting backdrop for what could have been an all-star, superpowered frolic, but the unfortunate reality is an unfinished and poorly designed button masher. The action is awkward, the level design is messy and uninspired, and the minimal dialogue and major technical problems denigrate the source material. Furthermore, the PSP version of the game has jettisoned all cooperative multiplayer options, forcing you to team up with the awful artificial intelligence in lieu of your friends. Marvel Ultimate Alliance 2 represents a step backward in every conceivable way and is unworthy of its illustrious license.

Nevertheless, there are some points of light twinkling in the murk that mainly come from the source material bringing the fabled heroes together. The story is based on two well-known Marvel storylines: Secret War and Civil War. A number of excellent prerendered cutscenes bring the imaginative plot to life and, more importantly, force you to make an important choice a short ways into the game. You see, our bastions of justice are split into two camps over a newly established law coercing superheroes into officially registering with the US government. Your decision impacts how the middle portion plays and which heroes from the sizeable roster you can include in your team of four before the two branching paths meet again for the final act. The divergent story is a great idea and, in theory, should provide a good reason to return for a second round to see what you missed if you were to have chosen differently. However, this bifurcated story is diminished by simplistic storytelling that fails to involve you with its characters. The thoughtful plot is thinned out by shockingly few (and sparsely written) character conversations in between missions--none of which involve multiple dialogue options, let alone divergent ones.

The first half hour of the game introduces you to all you'll need to know to get you through the missions. From an isometric camera view, you lead a team of four Marvel stars through hordes of expendable henchmen, occasionally taking detours to perform simple tasks or solve puzzles. You lead one character at a time while the other three are controlled by the AI, though you can easily switch to other characters on your team in an instant. By hammering on buttons, you string standard attacks into combos that might trip or stun your foes. Each hero can eventually perform four different superpowers, and depending on your hero, you can jump, double jump, fly, or even teleport. Unfortunately, the AI-controlled heroes are a real drag on the proceedings. They often stand around doing nothing in the midst of big fights and boss battles, so you may find yourself screaming at the Incredible Hulk to stop talking about smashing and actually do it. In a boss fight in which you must destroy a particular object within a time limit, the AI's refusal to help out is even more infuriating. The AI characters also have a habit of huddling close to you and fencing you into corners while you traverse the tight, cluttered hallways as if villain-stomping were an excuse for team bonding. At least in other versions of the game, you can ease the frustration by inviting friends to join you. The PSP version, which is essentially the same game released for the Wii, does not support cooperative play of any kind. The original game featured both ad-hoc and infrastructure multiplayer progression; the sequel forces you to deal with weak digital substitutes. There's absolutely no excuse for such a major loss.

Perhaps awkward clumps of heroes without regard for personal boundaries would be easier to handle if the levels were accommodating, but alas, you spend a good amount of time walking down narrow, flavorless corridors and encountering poorly placed clusters of enemies prepared to take advantage of your team's greatest weakness: a bad camera. It's bad enough that it will nauseatingly swoop around to give you a completely different view of the action than you need, but it has an even worse habit of positioning itself just above doorways where a cluster of collaborators will be waiting to deliver a beatdown. As if to give you a fancy cinematic view, there are a few sequences in which you watch the action from the side, but most of these occasions don't work out. In one case, you view through a series of windows broken up by slats, so you can't even see the action that well. Furthermore, the game's low frame rate drops even further during these sections, which breaks up the flow and destroys any visual appeal that may have been gleaned. It seems that the camera was created to handle large, open-air environments--but Marvel Ultimate Alliance 2 doesn't feature any. Even the city-street levels--the largest in the game--suffer from these issues.

The action isn't all bad, but it isn't good either. At its simplest, the button mashing, superpower-infused mayhem has a basic appeal. Yet Marvel Ultimate Alliance 2 seems to go out of its way to diminish the sense of flow and might that its combat should instill. The frame rate is consistently low and the animations are choppy, which in turn translates to lag in the controls. When pressing an attack button, your character may not respond immediately, and this delay sucks the immediacy out of the combat. The more action that occurs on the screen, the less in control you feel. It's like playing an online RPG with lag: Everything becomes herky-jerky and characters look like they are teleporting around. When camera issues are thrown into the mix, the awkwardness of it all is overwhelming. These frustrations culminate in the game's bonus missions. If you want to expand your roster and add unlockable characters to your team, you have to take on these scenarios. It's too bad you don't unlock characters as you play the campaign (as in the Xbox 360 and PlayStation 3 versions of the game) because these missions are a hassle and therefore not worth the trouble. For example, to unlock Jean Grey, you have to perform a solo mission in which you must destroy a bunch of vehicles by telekinetically flinging self-destructing enemies at them. But this mission is the opposite of fun. The suicidal foes get stuck on objects and spawn in too few locations; when these issues are combined with the ungainly camera, your annoyance levels rise.

This sequel introduces a new type of skill: fusions. These two-character attacks do an extra amount of damage, and some of them light up the screen with vibrant special effects. But they aren't much fun to perform, they suffer from the same clumsy animations as the main action, and they are hampered by clumsy features. You must build up a fusion energy meter, indicated on the screen by stars. Once you reach four stars, you can unleash a fusion by holding the L button and using the D pad to choose the hero you want fused with your active character. Oddly, the revival of fallen characters is also tied to the fusion stars. Unless an enemy drops a fusion token, which immediately grants you four stars, your meter is slow to build. Reviving a downed character uses up a star, which prolongs the wait. And, those tokens have a bad habit of appearing where they're hardest to get to--in the middle of multicharacter melees. It's odd, too, that the bright visual eruptions caused by fusions aren't accompanied by energetic audio effects. They sound feeble, which makes performing them less than exciting.

When you aren't beating up minor criminals and Marvel villains, you will be leveling your characters and equipping teamwide upgrade medals that drop on the battlefield. These elements are sadly shallow. You begin with only one upgrade slot and unlock a few more as you play; this methodology is just a way of presenting a stripped-down progression system as a series of "rewards." You can spend skill points as you see fit, and if you choose to allow characters to auto-advance, it's nice that you can assign priority levels to various powers so that they may evolve more quickly. However, the fact that you must lock yourself into a leveling method (auto-level the entire party, manually advance party, or auto-advance party but manually level the player-controlled character) at the outset of the game is mind-boggling. Also mind-boggling: every attempt to provide variety by taking the player out of the fracas. An early turret sequence controls poorly, which makes mowing down enemies enormously unsatisfying. An end-level puzzle in which you must activate a sequence of computer terminals stops the game dead in its tracks, and the way your AI-controlled party crowds near you as you move about the room makes it even more exasperating.

Some licensed games are a labor of love, exhibiting profound respect for the source material. Marvel Ultimate Alliance 2, on the other hand, doesn't exhibit the kind of care and reverence a beloved brand merits. It's inelegant and underdeveloped, and while the original featured both ad-hoc and online co-op play, you're stuck on your own this time around. Halfhearted dialogue, bad AI, unimaginative level design, stripped RPG elements, and all sorts of other factors make the game feel as if it were pieced together on an assembly line and quickly tossed onto store shelves. The Marvel License--and PSP owners--deserve better. 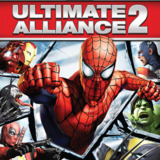 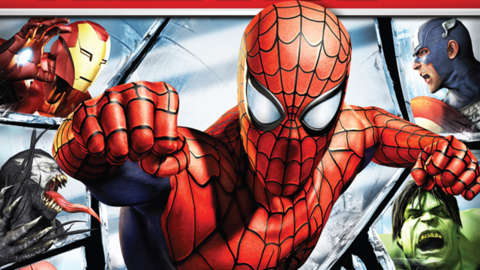 Assemble your dream team from the Marvel Universe from over 24 playable characters, each with specialized powers in Marvel: Ultimate Alliance 2.