It's really one of the more interesting shooters to see a home release in recent times, and there's really no telling when another will be released.

Mars Matrix may be Capcom's last Dreamcast shooter. If so, then it's a decent last hurrah. Developed by Takumi, the studio behind last year's sketchy Gigawing, Mars Matrix is a refinement of the developer's previous efforts. The result is a game that's altogether more polished than Gigawing, with more-functional systems and a more-playable design.

On the planet Mars, a human colony has revolted. Using big ships with big guns to accentuate their words and illustrate their ideals, these troublesome insurgents have turned Mars from a loyal, industrious colony into a war-torn hell. As the pilot of a mosquito-class ship, it's your job to restore order to Mars by blowing up the insurgents' ships and dodging their bullets.

The ship you pilot is equipped with a variety of armaments for this purpose. First, it has a standard shot, whose effect varies depending on which of the two available ships you choose--the red ship is equipped with a fairly far-reaching spread shot, while the blue ship is armed with a powerful linear cannon. Both ships also have access to a piercing shot that delivers a relatively short-range--though highly damaging--concentrated energy burst. But the ships' special weapon, the mosquito attack, is where Mars Matrix displays its subtle ingenuity--highly reminiscent of Gigawing's "reflect force," this special attack absorbs all enemy shell fire currently onscreen and whips it right back them, if maintained long enough. The longer you hold the button down, the more you'll absorb and the more likely you are to actually use the bullets offensively. At worst, the mosquito attack will absorb the shell fire, thus delivering you from its fatal contact; at best, the absorbed shell fire will be expelled from your ship in a most destructive manner, effectively clearing the screen. In either case, while you're in the process of absorbing, a blossoming spiral will appear around your ship, damaging anything it comes into contact with. The mosquito attack serves as both the game's smart bomb and shield, and it's a truly versatile and engaging weapon to use. An onscreen meter mediates your use of the mosquito attacks, ensuring that you don't rely on them solely to evade every attack. The meter refills pretty quickly, though, so you'll likely have access to it whenever you need it.

Mars Matrix's experience system is another of its more interesting aspects. As you blow things up, you'll find that bronze cubes of varying sizes are left in their wake. These cubes are the physical manifestations of experience, and if you pick enough of them up, your ship's basic weapons will power up. Larger enemies leave more-valuable large cubes, and those left by smaller enemies tend to litter the boards, making experience, in truth, very hard to avoid. This is a good thing, though--a positive side effect of experience is that it causes your mosquito-meter to refill just a bit more quickly.

As with every vertical-scrolling shooter since time immemorial, Mars Matrix's gameplay involves the surmounting of ridiculous odds. Hordes of enemies will come at you from all sides, and their bullets will verily fill the screen. In an interesting take on a very established genre convention, though, contact with enemy ships isn't fatal--you'll merely pass right through them. This doesn't make the game any easier, however--the amount of shell fire being thrown around at all times will prove more than a handful for even the most bleary-eyed veteran of pixilated battles, and Mars Matrix seems to put more of an emphasis on discerning shot patterns than even the most renowned examples of the genre. Gigawing this game is not, so don't expect to be thrown into a veritable deluge of shell fire with your only hope of survival being the use of the reflect force at just the right time.

In terms of presentation, Mars Matrix is quite solid. It's one of the better looking 2D shooters on home consoles, with relatively large, detailed sprites and some cool effects thrown into some unlikely places. Slowdown is only sometimes a problem, but fans of 2D shooters learned to swallow that pill long ago. The game's music is quite good--it's mostly made up of well-composed hard techno tracks that fit the theme quite well.

More importantly, though, Mars Matrix manages to have a lot more longevity than most shooters. This is due to Capcom's mode-locking skills, which force you to earn a good deal of what is normally open in most games from the start. Lives, game modes, continues, and such await your purchase in the game's shop mode, along with alternate ship colors, various power settings, and other things. Needless to say, only the most skilled individuals will be able to finish Mars Matrix with the game's default number of lives and continues, ensuring that those who want to see it all the way through have to pick at it for a while.

Dreamcast-owning shooter fans should certainly check Mars Matrix out. It's really one of the more interesting shooters to see a home release in recent times, and there's really no telling when another will be released. Its gameplay systems are solid, as are its presentation and production values--it really is the game that Gigawing could have been. 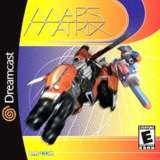