Both on its own and as a tribute to Mario's legacy, Mario vs. Donkey Kong does a great job.

Mario vs. Donkey Kong isn't really a direct sequel; rather, it's an update to the 1994 release of Donkey Kong on the original Game Boy. This 1994 release was an update to the original Donkey Kong formula, which introduced two of Nintendo's best-known characters and built the original template that platform games would work with for years to come. The 1994 update gave Mario new moves and gave the game's levels an almost puzzlelike quality. The game was a really cool merge of puzzle-solving and classic 2D platforming. The 2004 release, Mario vs. Donkey Kong, updates the look of the game and makes some cool changes of its own, making it a worthwhile action puzzler for Game Boy Advance owners.

The story opens with Donkey Kong watching TV. He sees an ad for the season's hot toy, the Mini-Mario, falls in love with the little windup plumbers, and decides to go get one for himself. But when the toys are sold out, the ape flies into a rage, raids the toy factory, and steals all of the Mini-Marios. So it's up to you, as regular-sized Mario, to chase your lifelong nemesis and recover the hot toys. Each of the game's main levels ends with your securing one of the missing Minis.

The game opens with six worlds, and there are eight objectives in each. The first six are standard levels. You'll navigate a series of levels of varying size in an attempt to recover a Mini-Mario. The first screen has a key and a locked door, and it's up to you to bring the key to the locked door. The game has a Super Mario Bros. 2 sort of logic to it in this sense--you carry keys, enemies, and other objects over your head, and you can toss these items to take out other enemies. Once you're through the locked door, the second stage of each normal level has you navigating the game's obstacles in an attempt to get to the Mini-Mario. Each stage has switch blocks that can be pressed to turn on various walls, platforms, and ladders. Knowing the order in which to hit the switches as you move about is the key to most of the puzzles.

Once you're through the first six levels of a world, the game changes a bit. The seventh level in each world has you leading the Mini-Mario toys to a toy box. They're fragile and can get easily crushed by thwomps and other obstacles, so you'll have to take care to lead them properly. The eighth level of each world is a boss fight against Donkey Kong. You'll usually resort to finding ways to pick things up and throw them in his general direction.

Mario has a lot of moves, which makes the game more about knowing your arsenal well and knowing when to employ each tactic. You will get a brief tutorial before most levels, which gives you a pretty clear view of Mario's moves. Aside from being just a plain ol' jumpman, Mario can execute backflips that send him much higher. He can hang and flip from telephone wires, he can pull off walking handstands--which makes him impervious to falling objects--he can pick up and toss items, he can climb around on hanging vines that work with the same logic as the vines in Donkey Kong Jr., and so on. The number of things that Mario can do feels just right and really adds a lot to the game.

At first glance, Mario vs. Donkey Kong seems like an incredibly short game. The game's first four worlds are really, really easy--the puzzles practically solve themselves. Around the fifth world, things start to pick up a bit, and the game gets more challenging. On top of that, the game's listing of only six worlds is deceiving. Beating the six main worlds unlocks six new worlds with six levels each. You can also unlock expert levels, which are even more challenging. So the game has a good amount of stuff to it and should keep players busy for a while.

The look of Mario vs. Donkey Kong is pretty good. The characters have a prerendered look to them that has sort of a Donkey Kong Country feel. On the downside, all of the characters look rather blocky, too. The levels are colorful, and the enemies--many of them updated versions of enemies found in Super Mario Bros. 2--look nice. On the sound side of things, the game has a great soundtrack and a lot of speech. How much you'll like the game's audio sort of depends on whether or not you've gotten sick of Mario's voice yet. He's pretty chatty, and that can get grating over time, though the solid music makes up for that quite easily.

Mario vs. Donkey Kong is a standout game that fans of portable puzzles will have a good time with. It also plays the nostalgia card very well, making references all over the place. The music will occasionally go all the way back to the original Donkey Kong, including the classic "I've got a hammer" music. The game also includes vines and droppable fruit like in Donkey Kong Jr., acrobatic moves that are reminiscent of Super Mario 64, and the ability to stand on, pick up, and toss enemies just like in Super Mario Bros. 2. Both on its own and as a tribute to Mario's legacy, Mario vs. Donkey Kong does a great job. 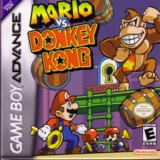 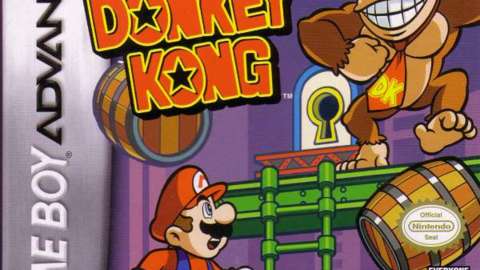 Both on its own and as a tribute to Mario's legacy, Mario vs. Donkey Kong does a great job.