Another great round of Mario-themed mini-puzzler fun awaits.

Mario may have bigger adversaries to tussle with these days, but sometimes, age-old conflicts can't be put to rest quite so easily. Aside from giving the mustachioed Italian plumber a shot at getting some payback and settling an old score with his original flaming-barrel-chucking ape nemesis, the Mario vs. Donkey Kong franchise provided an interesting break from the status quo for Mario and pals. Since it transitioned from the Game Boy Advance to the DS in 2006, the strategic puzzle-oriented gameplay revolving around safely guiding mini versions of Mario and his buds through obstacle-course levels hasn't changed much from one entry to the next. The fourth game in the spin-off series, Mario vs. Donkey Kong: Mini-Land Mayhem, sticks to the formula its predecessors laid out pretty closely. A few minor changes woven into the puzzle mechanics and solid online extras are certainly additions that boost the core fun to be found here, and it's just enough to entice players who've puzzled though previous rounds of mini-Mario babysitting to have another go.

The bare-bones story setup in Mini-Land Mayhem is so close to the past few games that it's essentially the same plot with only a minor variation or two. The rivalry between Mario and Donkey Kong heats up again when the big ape misses his chance to nab a free mini-Pauline (Mario's main squeeze before Princess Peach) toy at the grand opening of Mario's new outdoor theme park, Mini-Land. With only 100 toys to give out and Donkey Kong showing up as guest number 101, the hulking brute has an all-out fit and steals the real Pauline before running off deep into the park. Rather than chase after the two in person, Mario sends out a small army of his wind-up-toy minis to tackle the situation for him. Aside from being adorable, the minis of Mario and his other comrades you'll encounter in later stages are loaded with personality as they march along their merry way. The crisp, cartoonish visuals are also as colorful and charming as ever. While the overall look and presentation hasn't shifted much in this latest outing to Mini-Land, updated stage designs continue to offer fresh and interesting puzzle variations.

Managing a handful of wind-up minis as they strut their way through each stage is a hands-on affair with the stylus, though most of the direct manipulation involves moving around elements of the scenery to get all of the little buggers safely to the exit within a few seconds of each other. Instead of just moving blocks around on semitransparent grids and tweaking buttons to trigger barriers or spring-loaded launchers, Mini-Land Mayhem revamps the system around a cool construction theme. You'll tap and drag the stylus around the touch screen to drop ladders, ramps, bridges, warp pipes, conveyor belts, or other items to help the robotic minis through dangerous spikes, enemies, traps, or pitfalls. This is mostly handled by drawing lines between rivet blocks to span gaps. However, stages only give you a limited number of set pieces to work with (girders, ladders, conveyor belts, and the like), so you'll have to march your minis along to pick up extra parts to span multiple gaps and create longer bridges. It's not a huge change of pace from the last two DS entries in the series, but it's a clever twist. This construction system also gets really crazy during the boss encounters against Donkey Kong because many of them have you trying to build elaborate platforms to usher your minis skyward to hit triggers while avoiding increasingly volatile bombardments.

Tricky level designs often force you to think fast on your feet if you want to complete stages while collecting all of the goodies needed to unlock medals and open bonus content. Like its predecessors, Mini-Land Mayhem's stages are loaded with coins and tokens to collect, and nabbing them all successfully within the time limit while completing a stage ramps up your score. Even if you don't grab everything on the first go-around, it's fun to go back and strive for perfect completion. The eight themed worlds in the park have a lot of visual variety, and each introduces a new element or mechanic to expand on the core puzzle gameplay. Some stages are pretty tough to nail on the first try, but the overall difficulty isn't very steep--at least not on the first play-through. Though you can easily beat the game in a few sittings, doing so unlocks a bevy of extras, including special rainbow challenge levels, supertough expert stages, and bonus minigames. You'll also open Plus mode, which features much harder versions of each stage from the main game to tackle, so there's a lot to explore beyond the main stretch.

In addition to all the initial stages and unlockable content, Mini-Land Mayhem lets you craft your own custom stages in the construction zone. Designing your own levels is a cinch with the drag-and-drop grid, and it's easy to hop right in for a quick play test to see how well you've done. Custom levels can be traded with friends through local wireless connectivity, providing you each have a copy of the game, and there's also the option of sharing levels online through the Nintendo Wi-Fi Connection. Nintendo is offering official downloadable stages to boot. One totally new feature is the online Challenge mode that lets you compete in level-design challenges with other players. Levels crafted and shared this way can be downloaded and judged by anyone. It's an interesting addition that further extends an already-beefy list of gameplay options.

The only real problem with Mario vs. Donkey Kong: Mini-Land Mayhem is that it feels too much like the last two games in the series--both in terms of aesthetics and gameplay. That's not much of a complaint, considering how much content is loaded into this hefty little package, but it is hard to stave off the feeling that this is just another tweaked round of the same stuff. If you enjoyed the previous entries enough to crave more, or if you've been thinking about checking out the series for the first time, don't hesitate to give Mini-Land Mayhem a go. 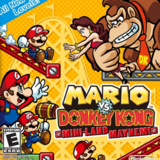