Mario vs. Donkey Kong 2: March of the Minis Review

The new touch-screen controls, level creator, and colorful presentation make March of the Minis an even better puzzle game than its predecessor.

Released in 2004, Mario vs. Donkey Kong for the Game Boy Advance took a decidedly more puzzle-oriented look at the infamous conflict between Italian plumber mascots and oversized apes that has captivated a generation for more than a quarter century. It was a unique and enjoyable spin on the typical Mario brand of platforming, though it was also a little on the easy and short side. Now the battle comes to the Nintendo DS in Mario vs. Donkey Kong 2: March of the Minis, a full-blown sequel that changes up the formula significantly. Touch-screen controls play a heavy role in the gameplay, and no longer do you control Mario himself; rather, you'll control the Mini-Marios that you frequently rescued in the first game. Throw in a new level-creator mode, an attractive presentation, and plenty of Donkey Kong-style monkey business, and you've got yourself an even better package than the original.

Much the way Mario vs. Donkey Kong paid frequent tribute to the Donkey Kong games of old, March of the Minis goes right into nostalgia mode from the opening cutscene. It's opening day at the brand-new Super Mini Mario World theme park, and the Mushroom Kingdom is all atwitter with excitement. Mario's on hand to cut the ribbon, and he's brought a lady friend along with him. Is it Peach? Daisy? His mother? Nope, it's Pauline, the long-forgotten heroine of the original Donkey Kong arcade games. Wouldn't you know it, Donkey Kong himself is in the crowd, eyeing the comely brunette. And when his offers of affection are ultimately ignored by Pauline, DK flies into yet another rage, kidnapping the girl and taking her to the roof of the park. Now, it's up to you to rescue her.

And by you, we don't mean the usual hero in these situations, Mario; rather, we mean a whole mess of Mini-Marios scattered about the game's eight worlds. March of the Minis follows a similar structure to the first game, with different stages in each world, as well as a boss stage where you fight Donkey Kong. However, the stages don't play much like they did in the GBA game. Here, the gameplay takes a slant far more akin to something found in the Lemmings series. Each stage has a number of deactivated Mini-Marios sitting in one spot or another. To activate them, you simply touch one with the stylus, and it will begin walking in whatever direction it's facing. You can turn it by swiping the stylus in the opposite direction, make it jump by swiping upward, and stop it by tapping on the Mini again. The ultimate goal is to get all the Minis in a stage to a door that's usually blockaded by a series of traps, pitfalls, enemies, jump pads, movable walls, and the like.

While the controls sound simple, the game itself is not--at least not overly so. Navigating the game's stages is less the tough part; more so, it's trying to keep track of all the various Minis. The game is especially keen on you keeping a string of several Minis moving at once, and though you can just as easily get through most stages only moving one Mini at a time, you won't score particularly high if you don't keep a bunch of them going simultaneously. Fortunately, it's easy enough to move the camera around the level, so you won't often find yourself struggling to figure out where your Minis are or where they're headed, and if you can get them all together into one string as they reach the level exit, you'll get a nice score bonus.

It's easier said than done. The original Mario vs. Donkey Kong may have been exceedingly easy for a good chunk of the normal game, but March of the Minis is only overly simplistic for the first couple of worlds. It's easy enough to get through most stages on the first or second try, especially if you're not overly concerned with collecting the various coins and items that sit in perilous places throughout each stage, or even with getting every single Mini through the door (so long as you rescue at least one, the next stage will unlock). However, to get bronze, silver, and especially gold ratings on each stage, you'll have to spend a good deal of time practicing each stage, discovering all the ways you can use your multiple Minis to get through faster and more efficiently. March of the Minis is the very definition of easy to learn, tough to master, and it squeezes out a good bit more replay value than its predecessor simply for that fact. You can bust through the single-player mode in maybe three or four hours, but it will take you much longer than that if you want to hit gold ratings on every stage.

You'll almost certainly want to keep playing, because March of the Minis is such a great bit of fun. Stages rarely take more than a minute or two at a time, but guiding the Minis around each stage's various obstacles is quite an addictive endeavor. There are so many little details to keep track of, such as enemies you can ride or use to hop high distances, platforms and walls that can be removed and repurposed elsewhere, switches that remove walls but create others, fire traps, spike pits, water spouts, and so on. There's a great variety to the stages, even if the controls don't involve more than simple stylus swipes.

In the last stage of each world, you'll go up against Donkey Kong in a boss battle. These are a little different than in the last game, as technically all you're doing is launching Minis out of a cannon at an exposed DK. However, there is a bit more to it than that. For one, the number of Minis you rescue throughout a world's stages ends up being the number of Minis you can use to shoot at DK. Hitting DK with a shot doesn't decrease your ammo count, but being hit with one of the various objects DK throws down at you, or firing into a spiked barrier, random floating enemy, or other such obstacle will cost you one Mini. You have to continuously rotate your cannon around to avoid objects, as well as adjust based on where DK appears on the top screen, as he's quite nimble and likes to move around. The last boss battle in the game changes the game up a bit. We won't spoil it for you, but we will say it's much more like the classic Donkey Kong that most have come to know and love over the years.

If you tire of the available stages at any point, you can opt to create your own using the game's construction mode. With this mode, you simply pick one of the available worlds and start building a new stage using any of the available set pieces, traps, and enemies found in those specific worlds. As level editors go, it's a fairly easy and fun one to use, and you can create excellent stages without having to spend hours at a time painstakingly placing items. But what fun would it be if you couldn't show off your creations? Fortunately, March of the Minis lets you trade levels both by syncing up with a friend that has a DS and a copy of the game or online via the Nintendo Wi-Fi service. Simply hop online, hook up with another player, and send and recieve levels using the easy-to-navigate online menus. It's a relatively simple process and a great way to add new content to the game.

As far as presentation is concerned, March of the Minis is a sharp and colorful-looking game that takes its cues from Mario and Donkey Kong games of the past. Though none of the stages are particularly large, everything has a crisp, bright look to it, and the character graphics are simply adorable. Mini-Marios are undeniably cute as they mechanically wander around a level, periodically turning to the camera to cheer or crumbling to pieces when they hit an enemy or fall into a trap. The audio design is also very well done. The music is catchy and even includes a few familiar old Donkey Kong tunes; the sound effects are pleasant and don't repeat overly much; and the cute little vocalizations the Minis make are hard not to love.

Mario vs. Donkey Kong 2 may not play quite the same way the original game did, but the new take on the formula is a fun and refreshing one. The touch-screen controls are easy to get a handle on, and with more than 80 different stages to play through, as well as the construction mode, you'll find yourself with plenty to do. It's simply a great time for Mario fans and puzzle fans alike. 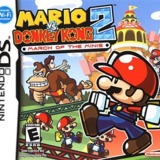 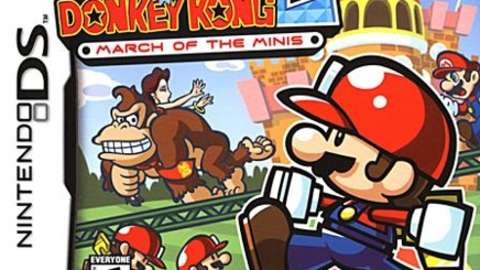 Mario vs. Donkey Kong 2: March of the Minis

Mario and Donkey Kong face off once again in this sequel to Mario vs. Donkey Kong.