It's not another Mario sports gem, but Mario Super Sluggers still has a rough, unpolished appeal.

Mario sports games are well known for presenting arcade versions of popular sports that are easy to pick up and play, yet complex enough to satisfy skilled players. Mario Super Sluggers is the progeny of the GameCube's great Mario Superstar Baseball, but alas, this apple falls far from the tree. A number of changes skew the game toward simplicity and accessibility, and in many ways the game feels like it's been jabbed in the thigh with a strong dose of performance-diminishing Mario Party extract. Many will likely enjoy the redesigned challenge mode and motion-sensitive controls, but those hoping for another engaging arcade sports title will be disappointed.

As you might expect, Mario Super Sluggers is all about the motion controls. Cock the remote back, then sweep it forward to swing your bat. Lift it up, then flick it down to throw a pitch. Shake the remote to run faster. Wiggle it to throw the ball in the field. Add in a button or two and you've got yourself the main control scheme. You can play with or without the Nunchuk; the former scheme is best for folks who want to control base runners and fielders, the latter for those who don't mind leaving some decisions up to the conservative AI. Either way, you'll be shaking your arm a lot, though much of the game is structured to accommodate frequent flailing (more on that in a minute).

You also have the option to hold the remote sideways and eschew motion control altogether, though you'll have to learn it the hard way since you can't use this scheme in the tutorial. The sideways style does give your wrist a rest, but the D pad is much less responsive than the analog stick, and you'll often find yourself overrunning bases since the button you tap rapidly to sprint is the same button that tells your runner to advance. The remote and Nunchuk combo is the best of the lot, but it makes one wonder why they didn't just enable the GameCube or Classic controller as well.

Taking the field in exhibition mode is the best way to get a pure Mario-style baseball experience in Super Sluggers. The computer can provide a stiff challenge when set on a high difficulty level, and building your roster and lineup to capitalize on chemistry between your players is a fun exercise. Chemistry enables players to perform special defensive moves, like a quick buddy throw or a home run-robbing buddy jump. If the batter and the player in the on-deck circle have chemistry, then the latter can launch Mario Kart-esque items into the field to try to disrupt the defense. These additions add a neat arcade twist, and multiplayer games can get pretty heated. Super Sluggers offers good, competitive fun for a group of good-natured opponents, and it is certainly at its best when played by two or more people at a time.

The single-player challenge mode was one of the strengths of Mario Superstar Baseball, and in it you traveled from stadium to stadium playing baseball games and recruiting new players by completing certain in-game challenges. This mode has been reworked for Mario Super Sluggers. Where previously you would go to Mario Stadium and play the plumber and his team a few times, you now go to the Mario Stadium area and wander around a bit. You'll startle balled-up Nokis, wake up Monty Mole, defeat a few Magikoopas, and break a Pianta out of a barrel. Different team captains have different abilities, each of which must be brought to bear in each area. To vanquish foes and convince locals to join your team, you'll have to complete short baseball challenges like "throw different pitches" and "get a double play." Separated from actual baseball games, these challenges become much shorter and much easier to accomplish, not to mention easier on your elbow.

Whether or not you'll like the challenge mode really depends on your perspective. Folks looking for some light, baseball-themed Mario fun will probably enjoy it. The minigames sprinkled throughout play like goofy tests of your baseball skills, and a few remote-twisting puzzles add some extra variety. Pretty much every iconic Mario character you can think of is in here, quipping and griping as they are wont to do, and winning them all over to your side will require a substantial amount of adventuring. However, if you're in the market for more actual baseball action, then challenge mode just won't fit the bill. Along with the aforementioned omissions, the quest to earn each character a star rating by completing a number of diverse challenges is no more, replaced by just one condition: Play on a team that beats Bowser.

One strike against Mario Super Sluggers is that the production values aren't noticeably better than those of Mario Superstar Baseball. Attention has been paid to the character models, but everything else feels neglected. Many stadiums have wacky obstacles in the outfield, but none of them are as lush, intricate, and well designed as the GameCube's Peach Garden. Activating your star power while pitching or hitting triggers a short power-up cinematic, but it's never anything more than some bland red and orange flourishes. Particularly onerous is the single-player behind-the-mound pitching camera that makes it very difficult to tell where your pitch is when it crosses the tiny plate in the distance. People who didn't play Mario Superstar Baseball may be more forgiving, but the whole presentation has a fuzzy, unpleasant, phoned-it-in feel.

Despite its many shortcomings, Mario Super Sluggers is good enough to offer some solid entertainment to the right gamers. Collect-'em-all Mariophiles will dig the new challenge mode, and Wii party hosts will enjoy playing frantic multiplayer games. More serious baseballers will find satisfaction in facing off against one another, but will find the rest of the package wanting. While there's certainly fun to be had, it's a shame Super Sluggers couldn't find that balance between accessibility and complexity that has made past Mario sports games so successful. 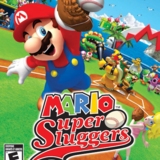