Mario's latest athletic endeavor lacks the sort of skillful competition that could have made for a compelling challenge.

Mario has a difficult life. After a busy day of bopping goombas on the head and throwing fireballs at sentient cacti, the last thing he wants to think about on his off days is the trials and tribulations that go along with platforming. So he has taken up a few sports in his free time. Mario Sports Mix isn't the first time the mustachioed mascot has dabbled in the athletic arena, and it's far from his best effort. The four sports included in this compilation are a poor blend of real-life rules and the off-the-wall flair common in the Mushroom Kingdom, and the result is a shallow and often boring competition that lacks any sort of compelling hook. Stripped-down versions of basketball and hockey are so random and sluggish that it's harder to stifle a yawn than it is to score, and volleyball is so simple that it takes all your energy just to stay focused for an entire point. Dodgeball is the worst of these uninspired events, failing to muster a smile even during its best moments. Mario Sports Mix controls well enough and packs the cartoony charm you would expect from a mascot game, but it's hard to care about such trivialities when the core package is so utterly lacking in the most important facet: fun.

The progression in Mario Sports Mix borrows the tournament idea that has appeared in many other Nintendo sports games. Mushroom, flower, and star cups let you take on the incompetent computer-controlled players while you come to grips with the rules, travel to a variety of unique courts, and unlock a few characters. It's a predictable structure that's made tedious by your toothless opponents. It's incredibly easy to run up the score in all four of the sports, and though you do unlock a harder difficulty setting when you raise that trophy at the end, more challenge does not equal more entertainment. The computer opponents play as cheap as they can when the difficulty is ratcheted up, so even though you can still come out on top more often than not, it's a grind because you rarely feel in control of your fate. Luckily, you can remove the annoying computer completely by squaring off against a few friends instead. It's certainly more fun to take on your buddies than the AI, but the shallow mechanics sap any long-term appeal.

Basketball is the strongest offering in Mario Sports Mix, though that isn't saying much. Most of the rules have been stripped away, so once you choose your favorite Mario characters, you can jump into a match without worrying too much about the intricacies of the game. The focus is placed clearly on the defensive side of the court. Blocking a shot or dunk attempt is a cinch because it takes so long for an offensive player to take a shot, and since there's no penalty for goaltending, you can stand near the hoop and swat away anything that flies toward the basket. Because of your overpowering defensive presence, playing offense often feels like a game of chance. You can call for (or go up to catch) an alley-oop at any time, and this is the quickest way to score if the defense is napping. If they're hounding you, a quick spin move can shake you free for a moment, but the pace of the game is so sluggish that it's all too easy for a defender to catch up even after he has been beaten. There is certainly a thrill when you dunk in your friend's face or nail a three-pointer at the buzzer, but because it's so easy to reject almost every shot, basketball is often a frustrating and grueling affair.

Hockey follows closely in basketball's footsteps, mimicking the back-and-forth action, but you don't even have the thrill of a satisfying defensive effort here. Luck plays a much larger part in hockey because of the random efforts from the goalies. You have the ability to aim your shot with a handy onscreen arrow, but you have to hope your shot goes in because it's ultimately up to the goaltender if he's going to block it or let it snap the twine. This whole process is random. The computer falls asleep for long stretches at a time, letting even the weakest attempts zoom right on by, but it can turn into a brick wall at the most inopportune times, without any way to reliably get a shot past. On offense, your best strategy is to pull off a quick one-timer, and it can be fun to fight for position in front of the net for an ideal scoring angle. On defense, you need to check early and often to stymie your opponent's advances. You even get in a fight occasionally, though it's not as interesting as it sounds. The characters don't make any contact, and you just shake the controller as rapidly as possible to win. Fighting is a neat idea, but it's poorly implemented here.

It's a shame that basketball and hockey are the two best offerings in this mix since they aren't all that fun. Volleyball is the most accurate representation of the real thing, though that's not exactly a winning formula. When the ball is hit to your side, a giant circle shows you where to stand. You then tap the ball to your teammate, wait for the return volley, and then spike it back to the other side. The process is repeated a half-dozen times until one team makes a mistake. And that's how the volleyball matches play out. There isn't a lot of skill because it's so obvious where you need to go next, and the game automatically ensures you hit the ball as long as you're in the right position. It's incredibly tedious to go through the set-volley-spike routine over and over again, and that predictability saps any chance of excitement.

Dodgeball brings a faster, more intense pace compared to volleyball, but it too is mired in problems. The goal in dodgeball is to hit your opponent with the ball and it's a dull ordeal in Mario Sports Mix. On the defensive side, if you tap the catch button at the right moment, you can avoid being hit. And that's pretty much the entire strategy. Stand still, face your opponent, and get your finger ready to catch that ball. Usually, you make a successful catch by employing this strategy, and then you turn into the offensive player and cross your fingers that your strike somehow connects. More likely than not, tedium turns the tide of battle to one player's side. The dull rhythm is boring, so you have to hope your opponent is lulled to sleep when you attack so you can deliver a clean blow. There are some team-up moves thrown in for variety, such as a jumping combo attack, but they all come to the same end. If you're quick with the catch button, it turns the match into a mundane trial of boredom.

To spice things up, there are special items and fancy courts in every sport. The items add a dose of unpredictability to the proceedings. Turtle shells and bombs can clear a path in a jiffy, and hoarding precious items and unleashing them at the perfect moment can shift the balance of power. Granted, the randomness of items does make victory feel cheap at times. Still, knocking your friend down with a well-placed banana peel can lead to a few laughs. There are also a variety of courts to unlock that add to the chaos. You may have to deal with a train running down the middle of a volleyball court or a swaying basketball hoop attached to a chandelier, and these events at least distract you from the banal action. The items and courts do inject some energy, and though they never raise the fun to what you would expect from a Mario sports game, they allow for some disposable entertainment for a little while.

Mario Sports Mix is rarely outright bad, but the whole experience is so utterly flat that it's hard to find the excitement. All of the sports control well and have their moments of fun, but they're ultimately so predictable that any sense of thrill is gone within the first few games. Mario sports games usually offer a goofy take on an established idea, but there's no such hook in his latest athletic attempt. This game lacks the depth of a more skillful sports outing and the joyful tug of anything-goes arcade action. Mario deserves a vacation for his hard work, but this is not the way to go about it.

View Comments (2)
Back To Top
4
Poor
About GameSpot Reviews 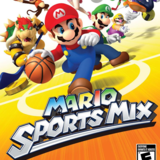