The Mario & Sonic series has always, and perhaps bizarrely, mixed accessible minigames, topical sporting events, and gaming nostalgia. It's an odd but enduring mix, one that's given us Charmy Bee cameos in a stylised re-creation of England's capital city for London 2012, but sadly the mascot duo's fourth outing falls flat.

In Mario & Sonic's first outing on the Wii U, developer Sega starts with a major change for the series: Mario & Sonic at the Sochi 2014 Olympic Winter Games demands that you make use of the Wii MotionPlus across its collection of 20 Nintendo and Sega characters and 25-odd minigames. The hardware boost ensures an extra degree of controller fidelity in new and returning Olympic events including skiing, figure skating, and curling. And while the move creates an additional expense for families with only a few regular Wii Remotes kicking around, the MotionPlus helps bring a touch of finesse to a previously waggle-intensive series.

It's the forced addition of the GamePad that serves to complicate matters, shifting the series away from its simplistic roots. At best you've just got to explain each individual mechanic to a group all holding different configurations of controllers, but at worst you've got to contend with groups of irate children arguing over why one gets to have a GamePad and the others don't.

The GamePad is incorporated in various ways, and like with many aspects of the Mario & Sonic series, there are both ups and downs. Biathlon, a new event for 2014, mixes cross-country skiing on the Wii Remote with a shooting range, letting the player at the top of the pack shoot via the GamePad while forcing others to use the more complicated Wii Remote. It's a sporting event that hasn't been well translated into a party game, suffering too much from the fact that it's the person who's already ahead that gets placed in the most advantageous situation.

Bobsleigh is another example of an event that's complicated by the GamePad's involvement, only one that's far more endearingly preposterous. The leader steers the vehicle with the GamePad while barking orders at up to three other players, who lean their Wii Remotes to the left or right to help steer around corners. Sitting cross-legged in a row on the floor isn't required, but it does make this event a lot more fun.

Snowboard slopestyle, meanwhile, has you take turns to get the highest score on a downhill run, with points awarded for speed, jumps, and grinds. You steer with the GamePad, and flick the touchscreen to perform tricks. It's simple but fun, and is pleasantly different from the more traditional downhill skiing.

Many returning events are identical to their previous incarnations, though some have been spruced up a bit. Hockey, a particularly drab addition in Mario & Sonic's last wintry sojourn, fills in the hole left by the absence of soccer and beach volleyball, now functioning as a kind of cut-down NHL that has you darting around a tiny rink making chaotic overpowered shots while a Shy Guy sits in goal at each end. It's a lot more fun than you'd expect from such a rudimentary implementation, but it's also hard to imagine it being something you'd want to play multiple times.

Figure skating pairs easily takes the crown for the barmiest minigame. Two players are judged on synchronising their movements, and while you're each allowed to hold a Wii Remote, it's when you play together by holding hands around a single controller that the real silliness kicks in. Having one player clumsily spin around the other in real life while an onscreen Daisy pirouettes elegantly around Dr Eggman is enough to put a smile on anyone's face, although you might need to encourage your immediate friends and family members to finish a glass of wine before joining in.

There are highlights, then, but too many events prove to be a disappointment. I've always found it particularly difficult to feel anything but boredom for this series' ski jumping and speed skating modes, and the downhill slide offered by skeleton is handled with more panache by skiing and snowboarding. But it's Sochi 2014's Dream Events that are especially lacking, with the series' former fantastical twists now reduced to half-baked spins of preexisting events wrapped loosely in the aesthetics of the Sonic or Mario series. Snowball scrimmage is the worst of the lot; it's a crude third-person two-versus-two battle with flat snowball-firing guns.

The Mario & Sonic series has been an inclusive experience, catering to all players of all skill levels, but Sochi 2014 complicates that simplicity.

Developer Sega attempts to add value with a flurry of other modes, with Legends Showdown acting as the game's campaign. As opposed to the technically involved London Party board game of London 2012, Legends Showdown simply peppers a cluster of events with the odd cutscene, as a quartet of characters face off against shadow versions of themselves. Each area is capped off with a boss battle against one of the Sonic or Mario series' more obscure characters, including E-102 Gamma, Birdo, and Jet the Hawk. The mode is completely dull.

Medley Mania is similar to Legends Showdown, but presents clusters of events without any narrative context, and Action & Answer Tour mixes individual events with a quiz show . You must complete various feats during randomised events, such as exposing a picture hidden in smoke with curling stones. It's the most successful additional mode in the game by a country mile, forcing you to keep a little something extra buzzing around your head while competing.

The game also adds online competition to the series for the first time, but only via four events: Olympic events freestyle ski cross, snowboard cross, and short track speed skating, alongside multi-vehicle Dream Event winter sports champion race. You can be matched into games alongside strangers or people from your friends list, and online multiplayer is tied together with a national metagame. Winning points in an event goes towards a ranking for your country, with the game displaying the national rankings on the main screen and also via in-game updates on the GamePad.

The Mario & Sonic series has been an inclusive experience, catering to all players of all skill levels, but Sochi 2014 complicates that simplicity. The game's long-winded tutorials have a wearying effect, and the most enjoyable events--which are the simplest, coincidentally--are essentially identical to events from previous years. There are dribs of fun to be extracted from the overall package, but from the outset, it's hard to shake the feeling that this is a series that has now thoroughly outstayed its welcome.

The Mario & Sonic series is the perfect example of the kind of charming, bite-sized, and all-inclusive entertainment that defined Nintendo throughout the Wii's golden years, but a lack of creativity and a poor implementation of the Wii U GamePad ensure that Mario & Sonic's fourth outing in six years fails to secure a podium finish. 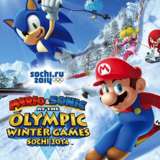 Martin Gaston has been known to enjoy a good collection of minigames late on a Friday night, and as a child loved Sonic the Hedgehog more than life itself. He played this latest collection of Olympic Winter games for 10 hours, forcing friends and coworkers to join in. 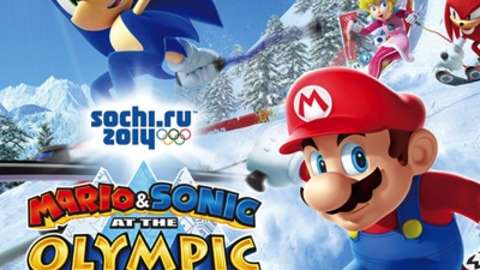 Join Mario and Sonic and the rest of your favorite characters as they team up and compete in events at the Sochi 2014 Olympic Winter Games.