This is hands down the single best GameCube tennis offering, and it's also one of the most enjoyable tennis video games around.

Mario Power Tennis is a fantastic example of Nintendo in top form. Here's an offering with brightly colored visuals and cheery music. It is, in a word, adorable. But under this gingerbread exterior lies a deep and challenging game of tennis. It certainly takes some liberties with the sport--because the last time we checked, you weren't allowed to bring giant hammers or jetpacks onto the court--but these twists definitely keep things interesting and are intrinsic to the goofy, character-driven style of the Mario name. No matter how you look at it, though, this is hands down the single best GameCube tennis offering, and it's also one of the most enjoyable tennis video games around.

The game is incredibly easy to pick up and play, especially if you've already been playing Top Spin, Virtua Tennis, or the original Mario Tennis for the N64. It's pretty much self-explanatory. You move your character around with the stick, and then you hit the big green button when you want to take a swing at the ball. There is, of course, a lot more to the action, and just a few minutes with the game begins to reveal how nuanced and deep the gameplay can get. You can influence the direction of your shot by leaning the stick in that direction just before you swing, and you can increase the power of your shot by double-tapping the button. Hitting the A button gives you a standard topspin shot, while the B button produces a lower-flying slice shot. You can also execute high-flying lobs and short-stopping drop shots by hitting A and then B, or B and then A, respectively, in quick succession. In the event that your opponent knocks a weak, high shot on to your side of the court, a star outline will appear. If you can position yourself inside the star and hit A and B at the same time quickly enough, you'll perform a smash shot that is very, very difficult to return.

Because of the wild visuals and some of the insane mechanics the game adds to the mix, the great lengths Mario Power Tennis goes to in making its fundamental tennis mechanics incredibly realistic are not immediately obvious. The power of your shots is affected by your position relative to the ball, the ball's height, and the direction in which you're going when you strike the ball. Each character also has a unique set of strengths and weaknesses, which makes who you choose to play with almost as important as how you play.

And on top of this core gameplay, developer Camelot has added some really wild mechanics that let the game earn its Mario name. Each character is outfitted with a pair of unique supermoves, one offensive and one defensive. Though the actual animation routine each character goes through is different, the defensive move always serves the purpose of saving a shot that you're too far removed from to hit. The offensive supermoves, however, offer a bit more variety. Some characters just put a lot of power behind their swings, making their shots very difficult to return. However, even if you do happen to be at the right place at the right time and can effectively make contact with the ball, its momentum will knock you back, hard, and leave you slightly stunned for a bit. Other characters can impart wicked spins on their shots, making their struck balls' trajectories arc dramatically, in addition to making it incredibly difficult to predict where these struck balls will land and how they will subsequently bounce.

These supermoves add an extra level of strategy to the gameplay, and they add a ton of personality to it as well. However, each time you activate one, you're forced to watch a little canned animation sequence. They're all bizarre and funny the first few times through, but eventually you become aware of how dramatically these minicutscenes affect the pacing of the game. If you're looking for more cut-and-dried tennis, you can choose to turn off these moves altogether, but it would have been nice if you could just skip past the animations and keep the wild moves.

As if these supermoves weren't enough, the game also contains a collection of "gimmick courts," each of which adds its own unique spin to the gameplay. Take the Luigi's Mansion court, for instance. As you play, ghosts will begin to haunt the court, tripping up players by placing banana peels under their feet. To keep the ghosts at bay, you'll have to hit the ball to a specific area of your opponent's side of the court, which will turn on the lights on your side and scare away the ghosts. There's also the Wario Factory court, where a set of directional arrows sit atop the net. Any time you knock the ball through one of the arrows, it causes the mesh of conveyor belts that make up the court surface to start moving. The gimmick court we found to be the most technically challenging was the Gooper Blooper court. Built right over a body of water, the Gooper Blooper court surface is constructed of panels with arrows on them, and when the ball lands on a panel, it causes that panel to move in the direction of the arrow, which either expands the size of your opponent's court or shrinks it, thus exposing the water beneath it. This doesn't limit your opponent's ability to move about, but rather, it limits the area that you can legally hit the ball to.

Tennis video game players may already be used to having to account for playing surfaces, such as those made of clay, grass, hard court material, and indoor turf, but the gimmick courts in Mario Power Tennis raise the stakes substantially with regard to the impact of playing surfaces on overall gameplay. Occasionally, the gimmick courts can get a little too busy, like on Luigi's Mansion court, but in general, they're fantastic at keeping the action fresh and fun. So are the game's various modes of play.

Mario Power Tennis is broken up into a few different modes. Like all exhibition modes, the exhibition mode here lets you choose your player, your opponent, and your court for one match. The tournament mode is split between matches on regular surfaces and matches on gimmick courts, and both feature a standard ladder-style advancement system. Winning tournaments can unlock new characters, new courts, and new gameplay styles for the exhibition mode. If even the gimmick courts are too much like straight tennis for you, Mario Power Tennis also includes a suite of tennis-themed minigames, some of which will probably feel pretty familiar if you've played any of the Virtua Tennis offerings before. "Artist on the Court" lobs special paintballs at you and challenges you to knock them onto the appropriate areas of an uncolored picture that's sitting where the net would usually be. "Terror Tennis" presents you with a wall of ghostly portraits on the opposite end of the court that you have to keep in line by lobbing balls at any of the ghosts that start moving around. There are only five of these minigames to begin with, but tournament wins can unlock several more.

Mario Power Tennis includes several different control types that are tuned to different skill levels, which deliberately ensures that no player is left behind. The beginner control scheme automatically handles everything other than movement and swinging at the ball, while the intermediate difficulty requires you to hit a button to activate your supermove. However, it will automatically choose the appropriate one depending on your distance from the ball. Finally, the most advanced mode makes you do everything by hand. Similarly, the artificial intelligence in the exhibition mode can be adjusted pretty extensively. If you've played a lot of tennis games, you may find the AI in the standard tournament to be a bit too forgiving for most of the matches. Our experience was that, though the AI was getting marginally better as we progressed, it was still barely able to score a single point on us. Then, at the end of the third tournament, the computer suddenly became an overpowered tennis savant that shut us out round after round. This sudden and significant shift in difficulty can be jarring, but it's not insurmountable. So if you find it too frustrating, you've got a good reason to check out the included collection of skill-honing minigames.

One of the most attractive points of Mario Power Tennis is that just about every mode can be played with four players. Whether it's a full doubles match or one of the crazy minigame challenges, Mario Power Tennis is an incredibly attractive package for those looking to kill some time with friends. The quick pacing and variety of gameplay styles mean that a group of four can play for five minutes or an hour and still come away with a great experience either way.

The game backs up its rock-solid gameplay with great visuals that are crisp, colorful, and technically sharp. Most importantly, though, the entire experience is absolutely brimming with personality. Even the basic grass and clay courts are set in massive, colorful stadiums that brim with piantas and koopas, all while a lakitu plays the role of chair umpire. But it's the gimmick courts that really stand out, because they do a fantastic job of recalling other Mario-related games. The Luigi's Mansion court has the same eerie green glow and strangely translucent ghosts, and the mansion itself sits ominously in the background. Piranha plants spit that nasty brown sludge (which is the stuff you had to clean up in Super Mario Sunshine) all over the otherwise sunny Delfino Plaza court. As for the character models, we don't feel bold in saying that these are some of the most detailed, sharpest-looking, and most well-animated versions of many of these characters to date. You might not always be able to tell when the camera is pulled way back, but when the camera zooms in for instant replays, it's downright impressive to look at them.

Nintendo has always kept the characters within the Mario universe from getting too chatty, which is why all the speech in Mario Power Tennis is a bit surprising. Don't expect any actual dialogue, but everyone has a nice set of suitable grunts and shouts that he or she will emit when on the court. Additionally, everyone has a few nice little lines he or she will spit out when a match is won or lost. The music is otherwise what you would expect, with lots of nice interpolations of Mario standards, though the game doesn't fall back on some of the basic Mario themes as often as you might anticipate. In all, though, the whole sound design backs up the generally fun and cheery feel of the action.

If you think that you're too cool for brightly colored visuals and cheery music, get over yourself. Yes, Nintendo may be making a concerted effort to appeal to a younger audience with its aesthetics, but it hasn't forgotten about adults, either. Mario Power Tennis is a shining example of Nintendo's "family gaming" philosophy. It's such an expertly crafted, well-rounded package that it goes well beyond appealing to just Nintendo fans or to just tennis fans. Instead, it's a suitable game for players of all shapes and sizes. 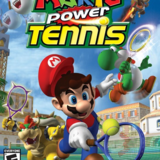