Nintendo has a knack for coming up with quirky games that are easy to pick up and play. The company's latest game, a funky fusion of Mario and pinball called Mario Pinball Land, is a good example. It combines the general concepts behind tabletop pinball with the characters and worlds from the Mario franchise to create a strange sort of adventure game that's fairly fun but a little on the short side.

Mario Pinball Land isn't pinball in the traditional sense. You don't use flippers to pound a shiny ball around a table loaded with bumpers, spinners, and loops in an effort to rack up the most points before the ball falls down the drain. Instead, you use flippers to help a balled-up Mario smack into enemies, roll through doorways, and do battle with a quartet of bosses in an effort to collect the coins and keys that he needs to invade Bowser's castle and eventually rescue the princess.

The game has all the trappings of a side-scrolling Mario game. Each world is set up as a series of rooms. Inside each room, you'll find enemies and hazards that have been borrowed from the Mario series (goombas, shyguys, koopa troopas, and so on). There's a pair of flippers at the bottom of each room and some doorways at the top. The basic idea is to use the flippers to slap Mario into the enemies in the room, collect the coins and stars they leave behind, and then propel him into the next room to do it all over again. Sometimes, you need to knock Mario into a series of switches to make the enemies appear. In some rooms, you'll come across structures that you can enter, such as a windmill or an igloo. There are underwater rooms too, which, besides looking bubbly, also slow things down quite a bit. Some enemies, like the koopa troopa and spiny, need to be knocked onto their backs before you can get rid of them. Bumping into enemies won't hurt Mario. In fact, the only way to lose a life is to fall down the drain that's in the first room of each world. Subsequent rooms are interconnected, so the only penalty for falling down a drain most of the time is ending up back in the previous room. That's where the game gets most of its challenge--if you drop out of a room before you've managed to clean it out, everything in it will reset the next time you enter it.

Some of the bosses and power-up items from the Mario series have even made it into Mario Pinball Land. You'll find a supersized boss sitting in the last room of each world--specifically, a piranha plant, a spiny puffer fish, Big Boo, and Tutankoopa. Of course, Bowser is waiting in his castle too. The bosses take multiple hits to defeat, which makes them pretty tough. Luckily, Mario can bump into question blocks, or spend a few gold coins at Toad's shop, to take advantage of the different power-up items the game has to offer. Anyone familiar with the Mario series will recognize the super mushroom, shrink mushroom, and starman items. Other items put a Mario-themed twist on traditional pinball bonuses, such as the Yoshi egg, which acts like a multiball and can be used to unlock jackpot platforms, and the pipe item, which can be used to block the drain at the bottom of the room. You can carry only one power-up item at a time and, once used, their effects typically last 20 seconds or so.

Pinball purists probably won't like some of the liberties that Nintendo and Fuse Games have taken in putting together Mario Pinball Land--namely, the lack of a tilt function and the spongy physics--but it doesn't seem like this game was made to draw in the pinball crowd anyway, which makes its title potentially misleading. Mario doesn't ricochet off of objects as sharply as a metal ball would and it seems like it takes forever for him to fall back down to the flipper area from the top of the room. Perhaps this can be explained: He's a rolled-up Italian plumber, not a pinball, so these differences make as much sense as anything else in the context of the game. The game was originally called Super Mario Ball when it was released in Japan, and considering the strongly Mario-centric design, that's actually a more accurate description.

Fans of the Mario series will appreciate the obvious and not-so-obvious references to the all the different games--including things like the different colored coins (gold, blue, and red) from Super Mario Sunshine, the shipwreck from Mario & Luigi: Superstar Saga, the pyramid and buzzards from Super Mario Bros. 3, and so on--but what's more impressive is how gorgeous the game itself looks. The whole thing has an isometric viewpoint similar to the one most role-playing games use, and the prerendered sprite graphics are so big, sharp, and clean that they make it seem like the GBA can churn out 3D just as easily as the GameCube can. Sure, it's all a trick made possible by animating the different enemies and objects from dozens of different angles and then throwing in some translucency and shading here and there, but the end result still looks great.

The same can't be said for the audio, unfortunately. Instead of reusing familiar Mario tunes for the music in each level, the developers used circus music instead. The music isn't bad at all, but it doesn't have that certain Mario charm either. On the upside, they did borrow all the sound and speech effects from past Mario games.

Depending on your outlook, you may or may not find the game lacking when it comes to replay value. The worlds are set up so that you'll have to shuttle back and forth between them to get enough stars to access some of the later rooms in each world, but simply getting all four keys and beating Bowser won't take most players very long--a day or two of casual play, tops. You can squeeze some additional mileage out of the main quest by trying to collect all 35 stars, which unlocks an extended end sequence. A time attack mode also opens up once you've completed the first few worlds. Beyond that, how much you get out of the game will depend on how much you enjoy playing it.

That's really the only glaring problem with Mario Pinball Land. It contains about half the number of worlds that it ought to have to really offer the same sort of full satisfaction that the side-scrolling Mario games tend to deliver. Otherwise, this is a fun new take on the traditional Mario formula. 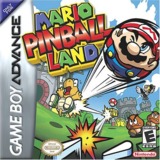