Mario Party Superstars Review - The Fault In Our Stars

My kids had a litany of questions during our first game of Mario Party Superstars. Where, my 12-year-old son asked, was Monty Mole, his favorite character from the last game? Why are there no minigames where you have to waggle the controllers around, my seven-year-old daughter asked? Why are there so few characters to choose from anyway? And why does everyone have the same dice block?

My kids have had a lot of experience with Super Mario Party (the previous game in the series, which was released on the Nintendo Switch in 2018), so these comparisons were inevitable. The newest entry, Mario Party Superstars, is a deliberate embrace of the Mario Party series' early days before motion control gimmicks and twists on its classic game mode became the norm. This is a game that delivers on the core Mario Party experience and is high on nostalgia, but my kids' questions highlighted the trade-off that comes with that approach. In embracing the old, Superstar loses a lot of tweaks and additions that have livened up recent Mario Party games, making Superstars as much of a step back as it is a throwback.

That step back doesn't necessarily mean Mario Party Superstars is a bad game, but it does feel like a dated one. If you've ever played a Mario Party game before, then Superstars will feel instantly familiar thanks to its stripped-back focus on the series' staples: dynamic, shifting boards, a huge selection of fun minigames, and more than a hint of tear-your-hair-out randomness that gives (almost) every game an anything-can-happen feel. Depending on your age, that familiarity may also extend to Superstars' selection of boards and minigames, many of which were taken from the very start of the Mario Party franchise back in the Nintendo 64 and GameCube days.

I'm certainly old enough to remember the very first Mario Party back in the late '90s, so it was fun to get that hit of nostalgia dopamine when playing on classic boards like Peach's Birthday Cake and Yoshi's Tropical Island. Nostalgia can only take you so far, though, so it's good that Superstar's boards--all taken from the first three Mario Party games--still feel fresh and engaging to play. Each of the boards here feature their own unique twists and turns that force you to think on the fly as conditions change. Yes, it's still hard to shake the rage that comes when seemingly random in-game events conspire to thwart carefully laid plans, but Mario Party Superstars (like most Mario Party games) shines in those occasional moments when your multi-turn strategy actually does bear fruit.

You have to, for example, pay close attention to the day/night cycle in Horror Land to make sure the path you need will be open by the time you reach it. Is one of your opponents one move away from Toadette (and therefore an all-precious Star) on Yoshi's Tropical Island? Then now's the time to use that custom dice block to land exactly on the event space that switches Toadette and Bowser's locations. During one tense game, I used a triple dice block to make sure I could hit Toadette's space to grab a star, before continuing on to a Boo space, where I paid the annoying ghost to steal a star from an opponent. Two stars in one turn! My son was angry at me for hours.

Superstar's minigames are similarly cribbed from Mario Party games of old, and if you're feeling full retro, there are even options at the start of each game to only play minigames selected from the N64 or GameCube eras. There are 100 games here, and among them is a great selection of classics, including the always hectic Bumper Balls, Booksquirm, Hexagon Heat, and one of my personal favorites, the Bowser-contorting Face Lift. Superstars even brings back some controversial minigames that require rotating your controller's analog stick (like Tug-O-War) which caused many a blister and even lawsuits back with the original Mario Party (but now are accompanied by a special warning). As is typically the case with such an expansive list, not every one of these selections is a winner. I'm not a fan of minigames like Crazy Cutters and Trace Race that require precise movements such as tracing over a line, for example, but they're ones my son gravitates to because he's young and has much better eyesight and motor skills than I do.

All of the minigames in Superstars are controlled solely by using controller buttons and a joystick, which means none of the Joy-Con's motion capabilities are utilized. This approach has its obvious benefits: Unlike Super Mario Party (which could only be played using single Joy-Cons), any Switch controller can be used in Superstar, and the game can also be played completely in handheld mode. The move away from Joy-Con reliance also importantly means Mario Party Superstars is the first new Mario Party game released for the Switch that can be played on all flavors of the handheld (including the Switch Lite).

Making the game available to all types of Switch owners is a positive, but removing motion control games does paradoxically limit the types of players that can enjoy Mario Party Superstars. Take my daughter, as an example: Motion control minigames were her favorite, as the intuitive controls allowed her to keep pace with her brother and grown-ups during a game session. She was much more disinclined to play Superstars because of this, and I can imagine many other little ones (and many casual players) will feel the same way.

The lack of motion controls just adds to the been there, played that feeling that permeates the Mario Party Superstars experience. This game, for better or worse, is the Mario Party of old, which is fine for Gen Xers like me looking to scratch a nostalgia itch. But others more used to how Mario Party has evolved in recent iterations (even in its own gradual ways) will be a little disappointed. I miss, for example, some of Super Mario Party's additions, such as unique dice blocks that actually added a layer of strategy to the character you chose, as well as the Sound Stage mode that was frenetic fun to play with the kids. There's nothing wrong with classic Mario Party, but I've played that game before.

That's not to say that despite the heavy emphasis on the past that Mario Party Superstars doesn't have any concessions to the new. There are several welcome quality-of-life additions (such as being able to exit a game midway through and resume it later, online player integration in all modes, and the ability to add extra turns at the end of a particularly close game), as well as an excellent minigames-only mode that groups the 100 games into buckets such as sports, action, team-based, and more. Mario Party Superstars certainly provides the highs that the series is capable of, but unless you're restricted to playing on the Switch Lite or itching to play with a Pro Controller, there's a better version of this game available for you and your loved ones to play in Super Mario Party.

View Comments (69)
Back To Top
6
Fair
About GameSpot Reviews 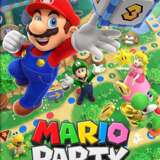 Randy co-opted his family to help him with this review, and played roughly 12 hours across all boards and minigame compilations. Code was provided by Nintendo.