When you hear "minigame collection," the first game that usually springs to mind is Mario Party. The series has been responsible for hilarious memories and strained relationships since the Nintendo 64 era, though the series hasn't always set a good example: some of the installments, like the miserable Mario Party Advance, have dragged you to the dregs of party hell. Fortunately, Mario Party: Island Tour is a raucous portable entry in the series that adds some refreshing new elements.

Island Tour adheres to the same structure as many of the other Mario Party games: two to four human or AI players move around a traditional board-game-style map in a competition, playing minigames for prizes and attempting to hinder other players throughout. Most Mario Party games have focused on the collecting of coins and stars to determine a winner at the end of a game, but Island Tour's boards feature different objectives and modes of play. Some, like Perilous Palace Path, simply require that you be the first to reach the goal, while others have you collecting items to see who can end the game with the most stuff. Even if the boards have a similar objective, there are other factors at play that alter gameplay significantly: Banzai Bill's Mad Mountain might let you summon a giant bullet that sends everyone in its path back several spaces, while Kamek's Magic Carpet Ride forgoes dice and assigns movement to an inventory of numbered cards, making your selections about how far to advance a strategic consideration. There's a nice bit of variety here, and the game helpfully gives ratings to luck, skill, and minigame categories when you're choosing a board to play on (though their accuracy is debatable). Most of the boards don't take too long to run through, but that's probably for the best given that the 3DS is a battery-based console, and nothing kills a party like running out of juice mid-game.

It's pretty easy to get things hopping, thanks to the 3DS Download Play feature. Much like Mario Party DS, Island Tour allows up to three additional players to access and enjoy the full game in multiplayer, even if they don't have their own copy. It takes a few minutes to send the game to other 3DSs--and, of course, they can't keep it once the host disconnects--but after the wait is over, the players have access to the entire game (though the host player controls all the settings and selections). It's a nice way to ensure that there's always an opportunity to get a party started as long as everybody has a system. Unfortunately, there's no way to play online. Yes, Mario Party is more fun in a local, group setting, but the omission of any sort of online option is puzzling, especially given that the 3DS supports friends lists and voice chat.

If you've got a party of one, however, Island Tour has a special single-player mode called Bowser's Tower. In this mode, your chosen character scales a tower, playing a minigame on each floor and winning to proceed. On every fifth floor, you face a boss character, and these fights are minigames in themselves. Compared to the single-player story mode in Mario Party DS, Bowser's Tower is weak: there's no variation on events depending on character choice; it takes a long time to complete a runthrough (and, if you're really unlucky, a bad roulette spin can send you back to the start); and you have to finish it more than once to unlock everything. Yet Bowser's Tower is a nice diversion, and as you play and complete board runs, Bowser's Tower, and individual minigames in either single- or multiplayer, you earn points that you can spend on unlockable content.

But the meat of any Mario Party is its minigame menagerie, and Island Tour has more winners than duds in its mix. While you have the expected minigames of the "collect stuff," "knock other players off a platform," and "dodge things coming at you" varieties, there are some more inventive offerings that make good use of the 3DS hardware. Since the 3DS offers a variety of control methods--controller, buttons, stylus, microphone, and gyroscopic motion--the minigames can use one or more of these elements to make more interesting snack-size experiences. This leads to some neat outings, such as Buzz a Fuzzy (a motion- and circle-pad-controlled archery minigame) and Match Faker (a memory-type game that lets you use the stylus to take notes). The game takes advantage of the fact that each player has their own display, resulting in things like the third-person, arena-based blasting in Tanks a Lot and the hyper-gliding ice racing in No Traction Action. There are even a few auxiliary minigames that use the oft-forgotten 3DS AR cards. Unlike in Wii Party, where only one player could use the GamePad, everybody is on equal footing with the same controls and view, and many of the minigames do a good job of both recognizing and taking advantage of that in their design.

But there are still some stinkers in the mix. Strictly luck-based minigames turn up in the rotation frequently, and they're not any fun. A few others feature sluggish controls that hamper your ability to move well. (In minigames that involved moving the system along with another control method, I found that the game had an obnoxious tendency to lose calibration when it shifted back to motion controls, which required an experience-interrupting recalibration.) Though you can switch between preset standard and easy minigames and turn mic-using games on or off, you still can't disable individual minigames or make a custom set, which is a disappointing oversight.

It's not a perfect party by any means, but some good design considerations, better-than-average variety, and always-enjoyable Mario thematics put Mario Party: Island Tour a few notches above your average video game bash-in-a-box. It's nicely portable, uses the hardware well, and has a mostly good minigame mix, making this the easy-to-play multiplayer vacation you've been looking for. 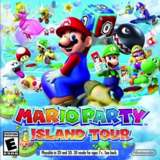 Heidi has been reviewing a lot of the minigame collections being released for the holidays and thinks Island Tour is one of the better picks in the genre right now. Everyone has played a Mario Party game at some point in their life, but Heidi has thought way, way too hard about what makes a minigame collection work. Jeez, will you stop thinking and just roll the dice already?