Mario Party spins its wheels for the seventh year in a row, though the formula will still prove enjoyable for some casual group gaming.

Now in its seventh year, Nintendo's Mario Party series has found itself locked in to the sort of annual rhythm usually reserved for sports game. The core formula never changes, but you can always expect a new conceptual gimmick, some minor gameplay tweaks, and a fresh batch of minigames. And this remains the case with Mario Party 7. It's not dramatically different from Mario Party 6 or, frankly, any of the other Mario Party games, but as a cheery collection of simple pick-up-and-play minigames that's well suited for younger and more-casual players, it still works.

They should really just start calling it Mario Theme Party. Last year saw Mario and company partying with celestial bodies, but this year things are a little less high concept: Mario needs a vacation, so he grabs all his buddies and takes them on a cruise. Curiously, Mario brings Wario and Waluigi along for the ride...but not Bowser, who is rather incensed at the snubbing. So, naturally, Bowser sets out to ruin the fun for everyone else.

That "fun," of course, involves loads and loads of minigames that have been couched in a board-game format. The inclusion of the Nintendo GameCube Mic marked the most significant addition to last year's Mario Party, which returns in Mario Party 7, and remains a fun little novelty. More importantly, Mario Party 7 introduces a dozen or so eight-player minigames. And since there are only four controller ports on the GameCube, players have to work in teams of two, each person holding one side of a controller. These minigames only ever require the use of an analog stick and a shoulder trigger, though the simplicity of the controls belies the challenge of having to cooperate on an almost intimate level with another player.

There are 86 minigames in all, and though there are more than a few "mirror" games (where the rules of a particular game have simply been reversed), as well as slightly revamped minigames from past Mario Parties, it's actually kind of surprising how Hudson has managed to maintain a relatively consistent level of quality with its minigames after all these years. The actual depth and complexity of the minigames, however, is a bit broader, though most only require you to use the analog stick, a single button, or a combination of the two. A lot of them are simple action games--drive a race car around a dirt track, navigate an inner tube down a serpentine river, pop balloons with a helicopter, and so on. Others are a bit more cerebral, requiring you to quickly match sets of images or play Simon-style color-matching games. Though there is a mode that lets you cut and paste the board-game stuff so you can go straight to the minigames, the minigames really do benefit from the context.

As mentioned earlier, Bowser is rather steamed about all this party business, which figures in to the game with the addition of "Bowser time." In the standard, four-player party format, there's a Bowser-shaped meter that slowly fills up after each full rotation of turns. Once filled, Bowser will do something nasty, such as steal coins, stars, or times--or he'll possibly force you to purchase worthless items from him. It ultimately adds more weight to the already heavy role that luck plays in the game, and as an aside, it makes Bowser seem more petty than actually evil.

Over the course of the three Mario Party games to have already appeared on the GameCube, the series hasn't really seen any appreciable improvement in its presentation. It does seem like Mario Party 7 puts forth a little effort to clean up some of the backgrounds, though the characters still have a sort of fuzzy look to them and feature some rather mechanical-looking animations. Still, the game largely trades in really, really colorful and jaunty tones, as you would expect from a Mario game, though it's definitely missing the extra level of shine that you would expect from a first-party Nintendo game. The sound design is also totally archetypal Mario, trotting out the same familiar sound effects, vocal quips, and musical accompaniments.

It's easy to fault Mario Party 7 for a very pronounced dearth of originality. The addition of eight-player minigames is really the only new feature worth considering buying the game for, as the rest of the changes are token gestures. So it's otherwise the same old Mario Party all over again. However, his compulsive level of sameness is counterbalanced by the fact that (besides the Mario Party series) there are not a lot of other games like this on the GameCube these days--or anywhere else, for that matter. 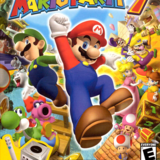