What started as a quirky, interesting use of Mario and all his iconic friends on the N64 has turned into an annual bash, which is now in its sixth year. Like pro sports games, with their roster updates and minor mechanical upgrades, each year's Mario Party changes the game slightly, but not so much that it's unrecognizable from its forebears. On the surface, Mario Party 6 seems to offer some of the biggest fundamental changes the series has ever seen. But this is really just a fresh coat of paint on an old building. Luckily for us, though, the building's foundation is still pretty strong, and it stays standing for yet another Party.

As always, Mario Party 6 is modeled after a board game, of sorts. However, rather than aiming for a static goal, winning is all about chasing after special stars, which appear randomly on the board, and collecting coins, which you'll need to actually buy these stars once you reach them. Each player takes turns rolling dice and moving about the board, and at the end of each round, everyone plays a minigame for a chance to win more coins. The theme of this year's Party is "cosmic," with representatives of the sun and the moon, named Brighton and Twila, respectively, figuring into gameplay. After every three rounds of play, the time of day shifts on the board. Aside from some aesthetic changes, these time shifts affect several paths on the board. Affected paths can either provide you with shortcuts to the stars or serve as cutoffs. Besides the day/night cycles, the other significant addition to Mario Party 6 is the inclusion of a microphone peripheral, which is used to control a handful of voice-activated minigames. These minigames are novel (and the voice recognition works well enough), but they don't revolutionize gameplay action. If a group of people yelling into a plastic microphone doesn't sound like a party enhancer to you, you have the option to just turn off all the mic-based minigames.

Much of the other changes that Mario Party 6 makes to the Mario Party formula are largely superficial. The gumball machines that dispensed power-ups on the board have been replaced by special orb spaces. You can hold on to up to three of these power-up orbs at a time, and they serve a variety of functions, not the least of which is placing traps on the board that can trip up your opponents and net you some of their coins. Minigame skills can certainly be a boon when playing Mario Party 6, but luck is still a big factor in winning. This has been the case for many of the previous installments in the series, though Mario Party 6 seems to throttle it back a little bit.

At their simplest, the minigames are exercises in pure luck; while at their most complex, they're comparable to four-player split-screen first-person shooters. All the minigames are "new," though a lot of the mechanics implemented will definitely feel familiar to Mario Party vets. But to wit, this simplicity and familiarity is arguably the biggest strength of the series. Plenty of other multiplayer games offer extremely deep, engaging experiences, though often at the expense of accessibility. Truly, just about anyone can play Mario Party 6, and even if he or she doesn't understand all the board game functions, he or she can play and have a good time.

The main party mode can be played by up to four players, either in a two-versus-two team-based format or in a full-on four-player fracas, though even in the battle royale mode, you'll often find yourself teaming up with other players for the minigames. The dynamic here is interesting, because depending on who you end up paired with, it can tactically be to your advantage to throw the minigame, adding a little cloak-and-dagger action to the proceedings. You can play the party mode by your lonesome, though this is admittedly not the optimal way to play any Mario Party game. More suited for single-player action is the solo mode, which caters to the single-player experience by making the boards shorter and excluding other players. If you'd like to cut the board out entirely, the "mini-game" mode gives you instant access to any of the minigames you've already played in the party or solo modes. The mic mode functions similarly to the "mini-game" mode, though it focuses exclusively on the microphone-based minigames.

The fundamental formula isn't so different, but it's different enough that even if you've played all five previous Mario Party games, there's still something new for you. However, the area that could really use some serious retooling is that of presentation. Last year's Party was already starting to look a little rusty, and this year's Party isn't looking any better. After seeing the Mario gang rendered so stunningly in Camelot's Mario Power Tennis just last month, the fuzzy character models here are much harder to swallow. While the board designs are new, they're no more inventive in design than what we've seen before, and they certainly don't look any better. Granted, the graphics have never been the main draw for the Mario Party series, but we can't shake the feeling that Hudson will continue riding the same graphical technology for as long as it can still sell copies. With most of the characters returning from last year, the game even sounds the same. Expect the same crop of voice samples and sound effects, as well as the same type of happy white-bread music we've heard before...if not the exact same tunes.

Whether you've worn out your last copy of Mario Party or are just looking for a light, accessible multiplayer experience, number six is a fine pick. Alternately, if you have yet to be charmed by previous Mario Party games, this one isn't likely to change your opinion of the series. 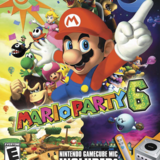 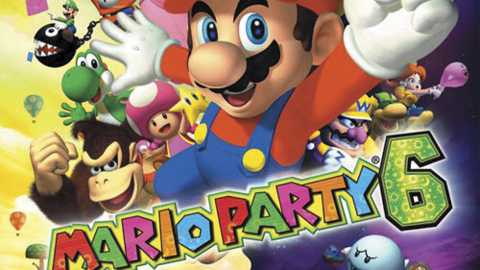