Thanks to Hudson's uncanny ability to continue producing simple but enjoyable minigames, the formula still works.

Though annual releases are something usually reserved for sports games, this marks the fifth time in as many years that a game bearing the Mario Party name has been released. The game's N64 roots are showing more and more with each passing installment, both in terms of presentation and gameplay. But thanks to Hudson's uncanny ability to continue producing simple but enjoyable minigames, the formula still works.

Mario Party 5 delivers pretty much what's come to be expected from the series. Up to four players run around a board game-style map, attempting to collect as many coins and stars as they can in an allotted number of turns. At the beginning of each turn, all four players participate in a minigame, which is really where the action lies in Mario Party 5. The minigames are always relatively simple, some requiring you to press a single button before the other players and some requiring you to mash on a button as fast as you can. However, the game makes up for this simplicity with sheer quantity, and, all told, you'll find more than 70 different minigames in Mario Party 5. Some of these are basically the same minigame with reversed rules, and some are highly reminiscent of minigames found in past Mario Party games. Fortunately, their inherent pick-up-and-playability helps keep the whole experience moving along smoothly.

Though the boards function much as they have in past installments, Mario Party 5 does make a few specific additions. Mario Party 5 adds gumball machines to the board, which vend special capsules whenever you pass them on the map. These capsules can contain power-ups that give you specific advantages. For instance, you may gain an extra dice roll during a turn, and/or you may be given the power to hinder opponents by limiting the range of numbers they can roll or by robbing them of coins. Despite the fact that the minigames are the meaty center of Mario Party 5, the game curiously goes to great pains to ensure that your luck on the board factors in almost as heavily as your skill in the minigames when determining your overall success. You'll find all sorts of random traps and bonuses scattered across the boards, as well as in the last five turns of a game.

Though the party mode is the crux of Mario Party 5, there are also some additional modes that serve as decent distractions. The bonus mode offers three different games outside of the standard party game structure. There's the card party game, which is essentially a simplified version of the regular party mode, with the board game format replaced by a card game and all the minigames stripped out. This mode is proof that the minigames are really what make Mario Party fun, as it's pretty dull. The other bonus modes, which include simplified two-on-two games of beach volleyball and ice hockey, are significantly more enjoyable and really stand as excellent additions to the whole Mario Party stable of games. If you don't much care for the whole board game format, Mario Party 5 also offers a minigame mode where you can lose the whole board game thing and just get straight to the action.

You can play the regular party mode by yourself, but the pacing can be a bit tedious. To make the single-player action in Mario Party 5 more engaging, Hudson has included a new story mode, where you face off against three of Bowser's Koopa Kids. At the beginning of each level, the Koopa Kids are scattered across the board, and it's up to you to hunt them down and eventually steal all their coins. The story mode takes several steps to ensure that you're either playing a minigame or on your way to playing a minigame. For instance, the game will sometimes have all the Koopa Kids take their turns at once, and, at one point, you'll even be introduced to a vulture named Klepto, who will regularly grab a Koopa Kid and drop him on your space, thus instantly initiating a duel. It's a nice aside, but Mario Party 5 is still at its best when you have a full group of four players to enjoy it with. If you're not the kind to enjoy social gaming, this game is probably not for you, as you might have guessed from the title.

The Mario Party franchise has been going for five years straight, and though it received a bit of a face-lift last year when it shifted from the N64 to the GameCube, the presentation is still starting to seem a bit antiquated. The character models haven't been updated, and the boards are looking a little bland, with some inconsistent texture quality. The minigames, while not terribly visually enticing, tend to do their jobs well enough, without slowdown or glaring visual faults. The voice work for the characters, while generally fitting the cheery tone of the game, is largely recycled from Mario Party 4. The music is limited to a handful of almost painfully cheery tunes that are basically riffs from a few classic Mario Bros. themes. Interestingly, they exude a quality of sound that's about on par with something synthesized by the N64 sound chip. In all, there's nothing particularly hideous about the way Mario Party 5 looks or sounds, but there's nothing particularly striking either, and the package has a cookie-cutter feel to it, as though it just rolled off the Mario Party assembly line.

The beauty of the Mario Party games has always been their accessibility, and the latest installment maintains that. Though the new single-player story mode and bonus games add a little more longevity to the game, the fundamental experience is still largely the same as that offered in previous Mario Party games. If you bought Mario Party 4 last year, Mario Party 5 is hard to recommend. But if you've stayed away from the Mario Party franchise thus far, and you're looking for a casual multiplayer experience, Mario Party 5 may very well be the ticket. 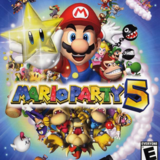