The greatest betterment is that since you won't get sick of the minigames as you did with the original, there's much more replay value in Mario Party 2, and replay value is the main point of the game.

A year ago, Nintendo began farming out its characters to external developers for use in new games for the N64, which lead to the creation of such titles as HAL's Super Smash Bros., Camelot's Mario Golf, and Hudson's Mario Party. Hudson had been known for great multiplayer party games with its long-running Bomberman series, and while Mario Party didn't quite reach the heights that the Bomberman line had achieved, it was a solid multiplayer game nonetheless. Now comes a sequel that hopes to improve on what players liked about the original and trim back what they didn't. The verdict? A more than partial success.

Understand that Mario Party and its successor are the video-game equivalents of board games. You and up to three other human or computer players take turns "rolling dice" to see how many spaces you can move on one of the handful of different boards you can choose from. The object? Gain the greatest number of stars and coins. The boards are spotted with random characters, such as the happy mushroom Toad or Bowser's sort-of-evil henchmen, who either help or hinder you in your quest. To further complicate matters, you can acquire items that you can use for additional rolls of the dice or opening otherwise-locked areas. And then there are the Boos, big-headed cartoon ghosts you can hire to steal coins or stars from your opponents. There are many random elements and huge upsets where the player in the lead ends up in last place and the player in last jumps to first.

The crux of Mario Party 2, though, is its minigames, which occur at the end of every round, but also in special cases, such as when you land on designated minigame spaces on the board. The minigames involve such tasks as skateboarding away from a giant Boo, baking cakes, and trying to stay on a wobbling platform while being bombarded by cannon fire. Sometimes you work with another player and sometimes it's three against one, but most often it's every man for himself.The main upgrade to the second Mario Party from the first is that more than forty new minigames have been added, while roughly two dozen of the original ones have returned. Gladly, the most annoying minigames from Mario Party are now gone. Sure, the Slot Car Derby, Platform Peril, and Crane Game still appear, unfortunately, but since there are now more than sixty games total, they don't come up nearly as often. By and large, the new games are a lot more fun than the old ones. Some are simply great, such as the Russian roulette-like Toad in the Box and the tank battle Shell Shocked, but even the less fabulous Move to the Music (a dance game that takes forever to master) and Bob-omb Barrage (a bomb toss that's hard to control) aren't too painful to play through. And that's great news for fans of Mario Party, because herein lies the original's main fault. It had a handful of minigames that you eventually just became utterly sick of, and since they would come up fairly often, you wouldn't want to play the game at all after a certain point. That's far less likely to happen with Mario Party 2, because even the worst of the minigames is endurable.

There is a host of minor improvements as well, such as your ability to buy items during gameplay, the addition of duel bouts between two or more players who've landed on the same space, and the fact that you can now overcome some of the more cryptic instructions for the minigames by entering into a practice round before you play the actual game. You can even turn off the bonuses at the end of the game if you find them to be too cheap. Graphically speaking, both the stages and the minigames appear a little sharper and more stylized than before, while the soundtrack is at least on par with the original game's, if not an improvement over it. The greatest betterment is that since you won't get sick of the minigames as you did with the original, there's much more replay value in Mario Party 2, and replay value is the main point of the game. It's a great deal of fun to play with a few friends, even more so than the last. 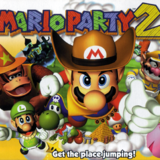