Whether you're an ardent fan of the Mario Kart series or a first-time player, Mario Kart Super Circuit is a must-have for owners of the Game Boy Advance.

While it's actually the third game in Nintendo's popular racing series, Mario Kart Super Circuit is more of a remake of the original Super Nintendo game than a sequel to Mario Kart 64 for the Nintendo 64. This is to be expected, since the Game Boy Advance hardware that Mario Kart Super Circuit runs on is essentially the same as the Super Nintendo's. The end result is a game that not only visually resembles Mario Kart, but also sounds and plays just like one of the most memorable racing games of all time.

Anyone who has played either of the previous Mario Kart games (or any of the kart spin-offs that this series has spawned) will be instantly familiar with Mario Kart Super Circuit, as it retains the same style of play and the same gameplay options as those of its predecessors. The game's core lies in the single-player Mario GP mode, which will take you through a series of races across such famous Mario locales as Bowser's castle, Boo lake, Peach circuit, and Shy Guy beach. In all, there are 16 tracks spread across four different "cups" of varying difficulty, much the same way that the races in Mario Kart and Mario Kart 64 were divided up. There's even a hidden cup with four extra races that you can unlock if you win the previous four series of races. You'll blast through these events with one of the Mario universe's most memorable characters--Yoshi, Peach, Toad, Mario, Luigi, Bowser, Wario, or Donkey Kong--all of whom are divided into three distinct weight categories. The lightweights, which are made up of Yoshi, Peach, and Toad, accelerate quickly but have a low top speed and can be easily knocked around by others. The big guys, such as Bowser and Donkey Kong, are slow off the line, and their speed is drastically affected if they venture onto grass or dirt, but they can use their size to easily push others around. Naturally, Luigi and Mario represent a perfect balance between either extremes. These characteristics translate well in the actual game, and you'll definitely note some differences between the three classes and their distinct advantages (or disadvantages) of racing on the game's different track types. For fans of Mario Kart and Mario Kart 64, playing the game on a handheld system will take a few minutes of getting used to, as the shoulder buttons are a little hard to master. But the learning curve is short, and after a few laps, playing the game will seem second nature to you.

All these tracks are fairly short--it doesn't take any longer than one minute to lap most of them--and they're littered with obstacles and enemies whose sole purpose is to slow you down. Just racing well won't guarantee a victory, though, as you'll also have to contend with the seven other racers on the track, who, like you, will make full use of various items such as the green turtle shell, the boost mushroom, and the infamous homing red turtle shell to their advantage. These weapons are as easy to use now as they were back on the Super Nintendo version of the game, and while a skilled shot will be able to precisely pick off a nearby racer with a green shell, for example, simply pressing the "fire" button at any time, no matter what weapon you have, will almost always ensure a hit sometime during the race. Turtle shells will continue to ricochet across tracks, and banana peels will stay put for the duration of the race until an unfortunate kart crosses their path. This adds an element of uncertainty that will put all but the best drivers on an almost even plane, and that always keeps the competition close and immensely fun. And just like its two predecessors, Mario Kart Super Circuit has three levels of difficulty--50cc, 100cc, and 150cc--that offer plenty of incentive to replay the Mario GP mode after you've finished it the first time.

But while the single-player aspect of Mario Kart Super Circuit is both robust and commendable, it's the multiplayer portion of the series that has given these games their notoriety. Mario Kart Super Circuit will let up to four players compete with each other on a single track, or two players can enter a Mario GP campaign and compete against other computer-controlled characters. There's even the coveted battle mode that pits players in an arena-type setting where the goal is to be the last person (or kart, in this case) standing. Or rather, the last kart with the most balloons left unpopped. And through its single-pak support, Mario Kart Super Circuit will let you hook up to three other Game Boy Advance units together, even if you're the only one with the game. Granted, the game's multiplayer options are limited at this point--you can race as only Yoshi, and you have a choice of only four tracks--but the fact that this mode was included in Mario Kart Super Circuit adds a significant amount of value to the game.

Since it's essentially running on Super Nintendo hardware, Mario Kart Super Circuit looks and sounds a lot like its 16-bit brethren, if not a little better. The color palette used in the game, in classic Nintendo fashion, is bright and crisp, and all the tracks have detailed backgrounds and various foreground sprites that do a good job of keeping up with the scaling and rotation of the ground itself. Additionally, the bright colors will save you from twisting and tilting your Game Boy Advance for optimum lighting, as with Castlevania: Circle of the Moon, for example. Most of the sound effects are also taken from the SNES version of the game, although a little bit of speech has been added to each of the characters. 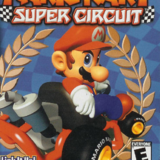