Even with all its bells and whistles, Mario Kart 64 is very likely to disappoint you after about a week.

Super Mario Kart, one of the greatest head-to-head titles ever released for the cartridge systems, is back, this time for the Nintendo 64. There's a whole new set of courses, new racers, slick 3-D graphics, and most surprisingly, a four-player simultaneous play option. This should all be great news to Mario Kart fans, and in fact it is - sort of.

Don't get me wrong: There's nothing really wrong with the new Mario Kart - the increasingly rotund plumber and his jolly crew have never looked and sounded so good. And from Wario's penguin-like mumblings to the glittering crown on the Princess'- head, it's obvious that the design team was plenty willing to get down and dirty with the presentation aspects of the game. The addition of more detailed sliding techniques and a few new nasty things to distract (read: crash) your opponents are welcome features (the deadly lightning bolt just can't be beat for dispensing raw fear). But once you get past the predictable new additions, you begin to realize that there's really not much depth to Mario Kart 64.

History has shown us plenty of titles that featured the very best sound and graphics money could buy which still somehow ended up being not much fun to play - Killer Instinct, Rebel Assault, and Tomb Raider all come to mind. While Mario Kart 64 is certainly better than most of these titles, it still shows a lack of solid play design that really hurts its long-term play value. First off, and perhaps most importantly, single-play mode is just too easy. This is due in part to the game's extra wide tracks, and in part to the poor AI routines - which deliver opponents who seem more like they're on their way to the local convenience store than in an all-out race for the finish line. This same lack of play consideration also infects the super-large battle courses. The result is that players can (and do) drive around for minutes without even spotting an opponent - much less getting a chance to score a hit. None of these problems ever really destroys the game entirely, but they do make it more difficult to get excited about picking up the controller for more than a handful of races. This is a big surprise considering Nintendo has built its empire on solid control and design in its games.

If you own a Nintendo 64, you're probably going to buy this game whether or not you read and heed this review - after all, there aren't really a lot of N64 games to choose from, and it IS a Mario title. Fair enough. The thing is, even with all its bells and whistles, Mario Kart 64 is very likely to disappoint you after about a week. I wouldn't feel right about not giving you that warning. That said, I'm off to Mario Kart on my SNES to reminisce about the good old days, and dream of what this cartridge could have been. 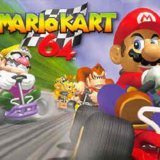