Mario Hoops presents an interesting new way to control what turns out to be a fun little basketball game.

Mario Hoops 3 on 3 is a Mario-themed basketball game that uses the Nintendo DS touch screen for shooting, passing, sidesteps, and just about every other move you can pull off. It's a good use for the touch screen that's often clever and gives you a variety of moves to choose from at any given moment. That sets up some unique strategies that come into play when you're going up against another player. But the teams you face in the single-player mode aren't nearly as much fun.

As the title indicates, the game pits teams of three players against one another. The ballers include Mario, Luigi, Bowser, Wario, Peach, Yoshi, Dixie Kong, and so on, though despite the wide selection of characters, there only seem to be a few different types of players. As you'd expect from a Mario-themed sports game, liberties are taken with the rules of basketball. The biggest one is the way scoring works. You'll never see a two-point basket in this game. Instead, the number of points you score for a basket varies and seems dependant on the type of shot and how many coins you're holding onto when you score. Question-mark tiles litter the floor of the court, and dribbling on them while tapping the touch screen earns you coins. You can also earn coins while dunking by executing a charge dunk, which leaves you hanging up in the air near the basket while coins ring up. That leaves you wide open to get bopped by one of the opposition, though, making the shot risky. Many of the moves in the game also have countermoves. To stop steal attempts, you can hold the stylus on the screen. From there, moving the stylus around moves the ball in the player's hands, letting you dribble on the other side of your player to dodge the swipes of an incoming steal. But that, of course, can be countered by a charged-up steal. The list of different moves goes on, and many of them have proper countermoves. If you were playing against a player of similar skill, the moves and countermoves can be interesting.

Unfortunately, the only way you get to play against a player of similar skill is if you happen to have a friend with a copy of the game. Online support for Wi-Fi multiplayer would have been a smart addition. Game sharing only lets you participate in a couple of tedious minigames, and the artificial intelligence you face off against in the tournament and exhibition games is a little too robotic to be fun for long. There are four cups and multiple difficulty levels for each one that unlock as you play, as well as five settings for exhibition matches. In the harder games, they'll swipe the ball from you if you get careless, and they'll usually block your charge dunks, as well. But scoring is rarely difficult; instead, it's defense that gets tougher as you play, as the AI opponents get better about preventing steals and passing the ball when their shots are likely to get stuffed. That evens the playing field out a lot.

The lighthearted nature of Mario's previous sporting efforts is also found in Mario Hoops, most notably in the different courts you'll play on. Many of them have unique gimmicks, such as one that has a special coin on the court that lets you spin the reels of a slot machine after you score. The spin may come up blank, or it might make matches that either increase or decrease the point total of the basket you just scored. Other courts have pits of fire, roaming bob-ombs, thwomps that appear out of thin air and attempt to crush you, and so on. Overall, the feel of the game is suitably Mario-like, which isn't an automatic guarantee, given that the game was developed by Square Enix.

Mario Hoops has good graphics, devoting the top screen of the DS to the 3D, on-court view and the touch screen to a bird's-eye view from above the court, showing you where the question-mark spots are and where the other players are located. But the game's animation lacks variety. Mario and his posse don't have many different dunks, and the supershot animations are the same every time you do them. Still, it's bright, colorful, and has a good sense of style. The music in the game, however, wears thin quickly, as does the voice acting. Mario has two things to say: "mama mia" when something goes wrong and "fantastico" whenever anything good happens. The other characters are all similarly limited on the vocabulary side. With only three characters on a team, all of the voice clips are overplayed almost immediately. The rest of the game's sound effects, though, are decent.

It's short on modes and asks you to replay the same tournaments on multiple difficulty settings, but the core gameplay in Mario Hoops is pretty good. If you're near other DS owners who are likely to play multiplayer with you frequently, Mario Hoops is a good choice. But by itself, the game wears out its welcome a little too quickly to be wholly recommendable. 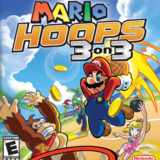