Mario Golf: World Tour deftly illustrates the pleasures of a humble game of golf: the careful ritual of checking the speed of the wind, assessing the lie of the ball, and puzzling over the perfect club for the job at hand. Its disjointed structure makes it less accessible than it should be, but this is a game built upon the simple satisfaction of golf mixed with the goofy charm of Nintendo's most popular mascots, and for the most part, it succeeds in delivering an endearing and fun experience.

There is, however, a disconnect between the "serious" side of Mario Golf and its all-out wacky side, and it's largely down to how the game is split into two distinct areas, which quickly come to feel at odds with one another. The first is the Castle Club, where you play exclusively as your Mii against the backdrop of a lavish country club. There you're free to mingle with the familiar Nintendo faces wandering the halls, shop at the boutique, visit the gym, and partake in a spot of tea in the Royal Room, but there's no real interaction permitted with Mario and Co, who exist only as NPCs in this mode. The castle and its cast are twee in a way that only Mario and friends can be, but Castle Club mode also serves a practical purpose, with its grounds playing host to a number of practice courses, handicap tournaments, and ad hoc challenges that teach you the basics of play.

Castle Club is where you find the game's three "serious" courses--Forest, Seaside, and Mountain--each of which hosts a tournament that must be won to progress to the next. Unfortunately, these courses are largely forgettable, particularly in comparison to the game's more exotic, themed offerings, and none of them feature the challenging layouts or undulating greens that seasoned video game golf players might hope for. I had little desire to return to any of them after winning each of the 18-hole tournaments, and the manner in which you're forced to unlock each tournament in order feels unnecessarily restrictive.

More troubling, though, is how Castle Club is an entirely separate entity from World Tour's more arcade-style offers in Mario Golf. A comprehensive series of practice sessions explain how elevation, ball lie, and wind affect shot selection. But while the challenges on offer at the Castle Club highlight the importance of skillful play, the courses unlocked in Mario Golf mode can be won and lost through the use of power-ups and novelty items, which is jarring after being taught the sport in a more serious manner. Still, once you've got to grips with the likes of Bullet Bills, Bob-ombs, and speed pads, courses like the candy-hued Peach Gardens and the coral-decorated underwater holes of Cheep Cheep Lagoon provide some thoroughly entertaining and humorous moments.

There's a satisfying sense of improvement across the game as a whole as you start to grasp the mechanics and begin experimenting with spin, draw and fade, and variable carry distances. Its basic three-button-press system sees the familiar use of a power bar to set the strength of the shot, and a sweet spot to land a perfect swing. It's a simple system, and because you're also given a generous degree of leeway, you rarely go too far off target. While this means you can confidently tackle more nuanced approach shots and delicate chips, it greatly reduces the element of risk; straying over par due to poor play is a rare occurrence.

The sheer charm of World Tour and its collection of classic Nintendo characters and environmental details go a long way towards keeping you entertained, though. There's a 12-strong cast of familiar faces to play as in Mario Golf mode, including the likes of the always lovable Mario and Luigi. Seeing them compete in a clutch of fun single-player modes that include stroke and match play, speed golf against the clock, and point play while they spout their classic catchphrases never fails to raise a smile.

It helps that there's lots to do too. There are versus options, numerous tournaments, and a series of challenges, some of which test your skill while others focus heavily on the use of power-ups. Sending your ball floating through the air over longer distances, or skimming across a handily placed speed pads feel great, at least once you've figured out what you're supposed to be doing with them. Challenges that incorporate them include completing a series of holes while hitting the ball through oversized rings, smacking moles out the ground, using a random selection of clubs, or competing against one of the 12 AI characters to unlock his or her Star Player equivalent (a more powerful but trickier to control version of the basic character).

Every round that you complete--be it in tournament play or in challenges--earns you coins to spend on gear and equipment in the castle boutique. Clubs, balls, and attire can be purchased to tweak your Mii's appearance as well as basic power and control stats, which is often helpful in getting past a particularly tricky shot, should you get stuck. It's a shame that World Tour isn’t easier to navigate, though. For all the effort that's gone into creating a central thematic hub with the Castle Club, having to back out of it to play a few rounds in Mario Golf mode feels unnecessarily cumbersome. Having everything accessible in one place rather than having to travel back and forth via the main menu screen would have made the game much more coherent.

Mario Golf: World Tour revels in power-ups and fantastical courses, while frequently breaking its offerings into a series of portable-friendly bite-sized chunks that have you flitting from one exotic course to another. There's a lot of fun to be had here, and with classic Nintendo characters backing up the action, World Tour is a thoroughly charming game too. What a shame, then, that it lacks the cohesion and refinement to make those sometimes-brilliant moments easier to digest and access. But if you can plough through the awkwardness, and get to grips with its seemingly endless array of powerups, you'll find an enjoyable and loveable game of golf.

Editor's Note: Online functionality was unavailable at the time of review. Online modes available at launch will be versus and tournament play with friends, local territory, and worldwide player bases. 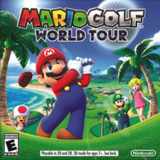 Stace Harman has been playing video game golf for more than two decades, and played close to 20 hours of Mario Golf: World Tour for this review. The Vita version of Everybody's Golf is a mainstay of his handheld gaming, and he has very fond memories of 2004's Mario Golf on the GBA. 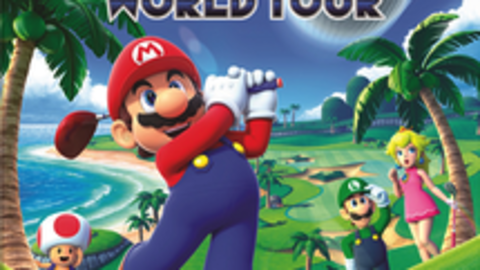 Mario Golf: World Tour is a golfing game for the Nintendo 3DS that includes both simple controls and a deeper experience for golf fans, plus courses that range from traditional to those inspired by the Mushroom Kingdom.