The NES version of Mario Bros. can be fun for a little while with two players, but it doesn't measure up to the seminal arcade hit it's based on.

Before he was super, he was just plain Mario, and together with his brother Luigi, all he did was rid a dingy sewer of a few types of filthy pests. But Mario Bros. is an arcade classic, and though the version created for the Nintendo Entertainment System captures the gameplay, it lacks the charming presentation of the 1983 original. Besides, this game has been rereleased so many times, chances are you've got at least one copy that was thrown in as an extra in one of your Super Mario Advance games. It's easy to feel very nostalgic for the original Mario Bros., since it's the point of origin for one of the greatest video game series--and characters--of all time. However, the NES port that's available on the Wii's Virtual Console service, while accurate to that particular version, just doesn't do justice to the original.

This is so accurate of a translation of the NES version of Mario Bros. that it even has that game's technical flaws, like issues with slowdown and screen flicker. So if you're nostalgic for a nasty-looking, first-generation Nintendo game, here it is. The gameplay does hold up. Mario Bros. featured an interesting and unique game design, especially if you threw two players into the mix. A couple of pipes at the top of the screen would spew out several types of pests, including turtles reminiscent of Super Mario Bros.' koopa troopas, crabs that get angry when you bother them, and flies that hop around in a vaguely disturbing fashion. All these critters are deadly to the touch, but if you jump up and slam the ground underneath their footing, they flip over and you can knock them out of the arena. To make matters more complicated, fireballs sometimes show up to ruin your day. Mario Bros. takes place entirely on a single screen as waves of pests keep coming, with more, faster pests making your life increasingly difficult. You get occasional respite with a bonus stage, and there's the ever-tempting "POW" block to give the game a bit of strategy; bumping it affects all pests whose feet are planted on the ground.

With two players in the mix, things naturally get competitive as you try to bump off more pests than your friend. You can even bump the other guy straight into harm's way, either intentionally or by accident, a reality that makes both players stay on their toes. For the time, this gameplay was deep. Today, without the incentive of having the high score at your local video arcade (or, say, on an online leaderboard), there's not much reason to play for more than an hour. Probably the best thing about the NES version of Mario Bros. is that it includes that unmistakable "cha-ching" sound whenever Mario collects a coin. For 500 Wii Points ($5), this game could be a decent deal, but only if you've got a partner in plumbing standing by. 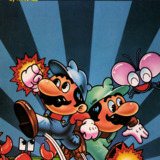