It's got a lot of star power, but this collection of sports-themed minigames isn't Mario and Sonic's finest hour.

Two years ago, Mario and Sonic joined forces for the first time to compete at the Beijing Summer Olympics. The result was a middling collection of sports-themed minigames that failed to deliver on the potential of that once-forbidden union. Never ones to give up, Mario and Sonic have reunited to hit the slopes and skating rinks of Vancouver for the 2010 Winter Games. It offers a slightly more diverse and entertaining assortment of events than its predecessor, but it still falls well short of earning a medal.

The game boasts 27 events, which are divided into two categories: actual Olympic events and zanier dream events. But, in fact, many of these play so similarly that it's a bit of a stretch to count them as two different events. Mechanically, ice hockey and its dream counterpart--fever ice hockey--are exactly the same. Fever hockey just has a bit of over-the-top flavor in the form of items and a shifting point value for goals. Nonetheless, there's a good variety of events on offer here. Unfortunately, most of them are simple, shallow minigames that, on their own, aren't likely to hold your interest for terribly long.

The game tries to make up for this by offering an Adventure mode--exclusive to the DS version--in which Mario and Sonic undertake a quest to rescue the Winter Games from a dastardly plot hatched by Bowser and Eggman. And to a certain extent, this works. The story helps the game get more mileage out of its expansive cast because you constantly recruit new characters to your party and encounter simple puzzles that take advantage of a character's unique traits. One such puzzle has you touch flashing buttons with Yoshi's tongue, while another has Amy using her trusty piko piko hammer to whack a series of rotating gears at the correct moment. The story pits Mario, Sonic, and friends in a face-off against Eggman, Bowser, and their cronies, and makes competing in the events feel meaningful. It also makes the overall experience feel more like a proper Mario and Sonic game.

The Adventure mode has its share of problems, though. The environments that Mario and Sonic must wander around in, looking for characters to talk to and missions to undertake, seem designed to force you to spend more time walking than necessary. This is thanks to inconveniently placed staircases and confusing layouts. The mazelike aspects to the environments are no mistake--one of the towns you'll explore is called Cubyrinth--but constantly having to waste time finding your way around and going the long way to get to a spot that should be just a few short steps away gets tiresome. It also makes the Adventure mode feel artificially padded. And although there's a good amount of variety to the missions you undertake, many of them are much too simple to be enjoyable. Passing the puck a few times in ice hockey or performing a starting dash in the luge event by releasing the A button at the right moment are such basic tasks that the Adventure mode would have been stronger without them, but these and other similarly undemanding assignments make up a fair number of your missions.

The events themselves are accessed from the main menu and played either individually or in a series of up to five events. They are divided into two basic categories: Those played with the control pad and buttons and those played with the stylus. The stylus events have you tapping the touch screen to shoot targets; move around the ice in figure skating and ice hockey; leap and land in the ski jump; throw stones and sweep in curling, and more. The biggest challenge most of these events provide is figuring out the proper timing to input specific commands. You can watch video tutorials on the controls for any event before competing, but they don't make it clear when, for instance, the ideal moment is to input the jump command (sliding up with the stylus) during a ski jump, and it may take a few experimental attempts before you get the timing down. Once you have a solid grasp on the controls for an event, though, it's unlikely that your computer-controlled rivals will pose much of a threat. If the controls offered more depth--if nailing a tricky figure skating routine, for instance, required skill and practice--success would be more rewarding. But it's all just too basic and easy to be compelling.

Events played with the buttons often involve button mashing to simulate athletic activity as games have done since the days of Track & Field. In speed skating, you pound on the shoulder buttons, while in cross-country skiing, you tap the A button to accelerate and pause periodically to recover stamina. Others, such as the luge and bobsleigh events, have you using the control pad to steer along a preset course. The most involved events are probably the snowboarding competitions, which have you drifting, tricking, and boosting down the slopes in what feels like a simplified version of the SSX games. Like the stylus events, these tend to be too easy. Even the attributes for each character don't seem to make much difference. It's not hard at all as Waluigi--one of the slowest characters in the game--to leave Sonic in the dust on the speed-skating rink.

During the events, the visuals focus on the characters, which are large and colorful, but the environments they inhabit are a bit lacking in detail. The towns in the Adventure mode look crisp and enchanting, however, and with everything covered in a carpet of glistening snow, you may feel like putting on your favorite cozy sweater to curl up with the game and a cup of hot cocoa. The catchy music enhances the winter wonderland atmosphere, but the game too often relies on the same few voice clips. The wordless exclamation Toad utters every time he says something--which is all the time--is particularly irritating.

You can compete against friends on local wireless in the game's events and a handful of party games, such as bingo. Download play lets you compete in most events with up to three opponents using just one cartridge, and it's certainly more fun button-mashing and screen-scratching with friends than alone. But even with friends, the events just don't hold up for very long on their own and are quickly forgettable. The Adventure mode is the best thing this game's got going for it, and it makes good use of its characters. The fact that it finally unites Mario and Sonic on an actual quest makes it a novel gaming experience that you may enjoy in spite of its significant flaws. 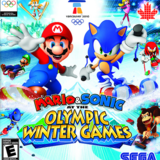