Partners in Time might not have as strong of a script as the previous Mario & Luigi, but it's still another charming, high quality RPG worth any DS owner's while.

Mario & Luigi: Partners in Time is the second entry in Nintendo's fledgling role-playing game franchise starring the brothers Mario. The series began with quite a bang in 2003 with Mario & Luigi: Superstar Saga, a polished action RPG for the Game Boy Advance. For the next entry in the series, Nintendo and developer Alpha Dream have moved the sequel to the DS, have done some tweaking to the winning formula introduced in Superstar Saga, and have taken advantage of some of the bells and whistles offered by the dual-screened hardware. The end result of all this work is a sequel that maintains the same level of quality as its predecessor but falls just a bit short of surpassing it.

The game's setup puts a new spin on the typical "kingdom and Peach in danger" scenario that anyone who has played a Mario game knows well. This time out you'll once again take control of Mario and Luigi as they set out to save the Mushroom Kingdom and Princess Peach from danger. The threat to all things Peach-y and mushroom-y comes from the darkest reaches of space. An evil race known as the Shroob has decided to look for greener pastures now that its world is no longer the jumping hot spot for life that it used to be. As luck would have it, the villainous fungoids, led by the villainous Princess Shroob, get a look at the Mushroom Kingdom and reckon it would be the perfect place to hold their stuff, hence the conquering. The twist to this setup is that this all takes place in the past. Over the course of the game you'll wind up going between the past and present to deal with the Shroob as they attempt to wreak havoc on both ends of the time stream.

It's a heady challenge to be sure, but you'll get help from a number of different places. You'll find a colorful cast of characters, some of which include the usual Mario suspects, such as Toadsworth and Professor E. Gadd. The good old balding, bespectacled professor also tosses you a bit of extra help in the form of Stuffwell, a sentient suitcase that doubles as a computer and serves as your assistant. You'll find that this luxurious leather companion comes in handy as you find yourself interacting with the past and present versions of the core game cast with astonishing regularity (apparently the Star Trek rules of time travel don't apply here). One notable aspect of the story is the way it deftly avoids the "cute" pitfall that it seemed destined for by the inclusion of Baby Mario and Baby Luigi. While the toddlers are as cute as can be, they're never overdone, which is good to see. The overall tale is well stocked with the requisite zaniness and twists you would expect, but it doesn't gel quite as well as Superstar Saga. The self-referential humor that gave the original game its bite isn't as prevalent, which leaves a serviceable story that, while still funny, is a bit on the bland side.

Of course there are still plenty of teeth to be found in Partners in Time's gameplay, which takes the core mechanics from Superstar Saga and tweaks them. If you played the original GBA game, then you should feel right at home when you fire up Partners in Time. Your time will be spent exploring different locales in the Mushroom Kingdom (in both the past and the present), solving puzzles, and uncovering more of the mystery behind the Shroob and their spongy princess. The game uses the basic mechanic of assigning a character to one of the DS's face buttons, with A controlling Mario and B controlling Luigi. The biggest addition to this system is Mario and Luigi's preschool alter egos from the past, who are controllable with the X and Y buttons. While you can control both sets of brothers as a team, with the babies riding piggyback on their adult counterparts, you'll often have to control both pairs independently to overcome the numerous obstacles you'll face. The babies, being considerably smaller, can squeeze into places or even be flung to locales that the older brothers can't reach.

You'll find that each set of brothers feature different abilities. For those keeping score, the adult versions of Mario and Luigi feature a scaled-down set of special moves from the first game. In addition to the pair's running and jumping abilities, you'll be able to interlock the two to form a quickly moving ball or to perform a variation on their propeller spin jump. The babies, on the other hand, must make do with Hammer Bros.-provided hammers, which let them hit switches or burrow underground. You'll also be able to make constructive use of child endangerment by using the older brothers to roll over their younger counterparts, temporarily flattening them to wafflelike proportions, which will let them squeeze into even tighter places or ride gusts of wind. Like the previous entry in the series, Partners in Time will feature agreeable RPG-lite elements and will let you earn experience--from defeating enemies--that you can use to level up and coins that you can use in the shops to buy items, clothing, and badges. The clothing and badge system remains essentially untouched, except that now you can outfit four adventurers. Though the clothes will come in adult and baby sizes, the badges, which offer different bonuses, can be equipped by all.

Once you get into combat, you'll see some of the other changes that have been made to the battle system. When you initiate combat while controlling the quartet, you'll be able to use the babies as added firepower, which comes in handy. The babies can be used for an additional stomp during a jump attack if you time your button press correctly or for a hammer attack from atop their older counterparts' shoulders. The tots also come in handy during the brothers' attacks, which have undergone an interesting change. The unique sibling attacks are now based on items you collect or buy, rather than being specific attacks you learn, which was the case in the GBA game. As a result, you'll find a wide variety of attacks that make inventive use of different combinations of the brothers. Some items can be used by a pair of sibs in battle and are enhanced when the babies are around. For example, green and red shells that require you to kick a shell off your foe between the two brothers can have their damage augmented when you've got the babies in tow, as one of the brothers will ride the shell and do added damage to your target. Other items will let you use all four brothers and dole out mega damage if your button pressing is on point.

You'll need your wits about you in battles, because your foes will provide a good level of challenge, although they still have individual quirks to clue you in on when and whom they're attacking. As before, you'll find that taking the time to familiarize yourself with each enemy's attack patterns will serve you well. Not only will you be able to dodge attacks, but you'll also be able to counterattack if you're quick. The boss battles are richer this time out and will often force you to use your head and figure out the best way to dole out some hurt.

While all of the above is pretty standard engaging fare, there are a number of DS-specific elements thrown into the mix. The top screen will serve double duty as an ever-present map and, when the need arises, as a gameplay screen that chronicles the babies as they head into different areas. During story sequences, the screen even adds some panoramic flair, thanks to sweeping camera angles. The touch screen comes into play a bit as well, although its use feels a bit tacked on as you furiously "clean" a dirty picture to make a discovery. Finally, the game also supports the DS rumble pack that originally came with Metroid Prime Pinball, which offers some tactile feedback throughout your adventure.

The visuals stay faithful to the look and feel of the GBA game and bring the familiar locales of the past and present Mushroom Kingdom to life with large sprites that animate well. The adult and baby versions of Mario and Luigi sport some nice, subtle bits of animation that give them unique personalities. The same holds true for many of the non-player characters you'll encounter. The DS allows for some added flair in the special-effects department, which is most noticeable during some of the brothers' attacks and during the assorted time distortions that occur as you make your jaunts between eras. The only blemish on the presentation is that you'll still find the occasional spot where making jumps is trickier than it should be and pulling off some of the counterattacks is rough due to the angled perspective.

The audio in the game is arguably the weakest link in the experience and is one that may try your patience. The good news is that the voice and sound effects are all spot on. You'll hear a good assortment of speech samples peppered throughout the game for the adult and baby versions of Mario, Luigi, Peach, and Bowser, as well as for other familiar faces. The voices work well, although those with a low tolerance for crying babies may be adjusting the volume control on their DS at times. The game's soundtrack, on the other hand, is a bit uneven. While Partners in Time features the elements of a solid soundtrack, thanks to unique themes for each locale and the familiar themes that come in during story sequences, it's missing a strong battle theme. The battle theme in Partners in Time lacks the bouncy groove that made Superstar Saga's theme catchy regardless of how often you had to hear it. The theme isn't bad; it's just forgettable.

At the end of the day, Mario & Luigi: Partners in Time is a perfectly fine sequel that hits just about every point you would want in a follow-up. The visuals are excellent, and the gameplay offers just about the right mix of old and new. However, the game's music and story lack the kick of Superstar Saga, which ultimately keeps it from surpassing its predecessor. Still, it's definitely a game worth checking out for the DS given that there aren't many RPGs out for the system and that this is easily one of the best of the bunch.

View Comments (0)
Back To Top
8.9
Great
About GameSpot Reviews 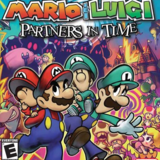 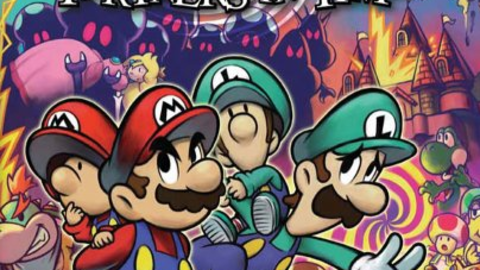 In this sequel to Mario & Luigi: Superstar Saga, the brothers travel back in time to retrieve Princess Peach, only to come face to face with baby versions of themselves, the princess, and Bowser.

8.8
Sign In to rate Mario & Luigi: Partners in Time