Koopa is the warmest place to hide.

It’s not every day a hero gets a chance to literally walk around in their mortal enemy’s shoes, which is what made Bowser’s Inside Story such a bizarre but wildly unique concept back in 2009. Even though not much has changed since its original DS release, it's still one of the stronger Mario RPGs, and its innovative gimmick remains exciting on 3DS. The setup here is that a mysterious affliction called the Blorps is spreading across the Mushroom Kingdom thanks to Fawful, an obnoxious trickster who's been handing out poisoned mushrooms. Naturally, Mario and Luigi are on the job, but after Bowser gets suckered into eating one of the mushrooms, he ends up with a surprising side effect: accidentally swallowing everything in his current field of vision, including the Mario Brothers. As Fawful makes a play to take over the kingdom, Bowser heads out to get some fiery payback with some unexpected help from the Mario Bros.

That's where the inventive gimmick comes in. You switch back and forth between controlling Bowser on the top screen (punching enemies and obstacles and burning down trees) and controlling Mario and Luigi in 2D inside Bowser's body (running, jumping, hitting things with hammers, and sliding down what you can only pray are literal pipes). Specific puzzles on Bowser's side require some assistance on the inside from Mario and Luigi, like shocking his muscles to give him more power to push things, and some actions Bowser performs will affect Mario and Luigi--Bowser drinking water will flood the bottom screen. If Bowser uses the mushroom's power to swallow his foes, Mario and Luigi will be responsible for finishing the enemy off internally. There’s an abundance of cleverness in this story--inspired moments where you are, essentially, playing co-op with yourself, and it’s exciting to wonder how it will bend your brain next.

The fundamentals of combat are building off the same-old turn-based Mario RPG mechanics, where attacks have a chance of doing extra damage and you have a chance to defend yourself using carefully timed button presses. There are very few surprises for anyone who played on DS, but a graphical overhaul on 3DS changes the cartoonish watercolors of the original game to something closer to 1996’s Super Mario RPG: Legend of the Seven Stars. It’s not as bright and immediately eye-catching, but there’s a gentle, storybookish beauty to it.

As far as gameplay is concerned, the series always been delightfully accessible, and the only difference here is the minor learning curve of remembering which buttons control which characters (Bowser's actions use X; Mario and Luigi use A and B; specific to this port, Y controls both brothers at the same time). That said, the game does go a bit too easy on you most of the play time. The game never gets truly challenging until the latter third, and by then, if you're playing carefully, you've learned how to counter every enemy and racked up a massive collection of recovery items. As a result, fights quickly become an unwelcome hindrance on the way to more story after a while.

Thankfully, the story and writing do drive you forward. There are body-based jokes at every opportunity, Bowser is humorously angry and obtuse, and the Globins--Bowser's melodramatic cellular structures--frequently try to steal the show with their laments. Even just the bizarre little moments of Mario and Luigi speaking to each other in pseudo-Italian are a joy. The entire concept of Fantastic Voyage-but-Nintendo is ripe with possibilities for outlandish twists and turns and distortions to characters we all know and love. Having that apply to someone other than the usual Mario Bros. crew is a special treat, especially for the more ambitious moments, like having to turn the 3DS on its side to play as a giant-sized Bowser. More than all this, though, it's a chance to get to know Mario's archnemesis in more detail.

This is the rare opportunity that makes the game’s brand new side-story, Bowser Jr's Journey, worthwhile for many of the same reasons. It’s an odd little real-time strategy game that more resembles a wonky sumo match than, say, Starcraft. Bowser Jr. himself is the commander sending waves of baddies across the screen to butt heads with others, dealing damage based on a rock-paper-scissors system of weakness. Like the main game, there isn’t a terrible amount of difficulty in getting through each battle, and these fights are also a lot less interesting and dynamic. There’s a lot more waiting around for enough damage to happen, or for Jr. to accumulate enough points to activate special moves.

There’s an abundance of cleverness in this story--inspired moments where you are, essentially, playing co-op with yourself, and it’s exciting to wonder how it will bend your brain next.

If there’s a redeeming quality to Bowser Jr.’s tale, it’s that it gives us the first real look at familial relations within the Bowser clan in ages. Jr.'s tale takes place after his dad goes off to his sit-down with Princess Peach about Blorps. In Bowser's absence, Jr. takes it upon himself to make a move to take over the kingdom. Unfortunately, his bratty overzealousness ends up earning the ire of the other Koopalings as well as the three wacky underlings Fawful plants in Bowser's Kingdom. And yet, as the story goes along, there's a strangely heartfelt streak to the proceedings, of a kid who really just wants his dad's approval and figuring out that he has to earn it, not throw tantrums for it. Towards the end, you're almost rooting for the little guy, and it makes the interminable nature of the fights worthwhile.

The extra mode certainly sweetens the pot for those who owned Bowser's Inside Story on DS, but fundamentally, it's the same game. If anything, the real drawback is the game coming off as an unnecessary surprise on the 3DS--which can already play the original game via backward compatibility. But the game itself remains one of Mario's RPG best, and it's a cheerful, inventive journey. 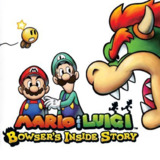 Justin Clark spent 25 hours between the two modes in Bowser's Inside Story. He continues to have urgent, disturbing questions about Bowser Jr's parentage. A copy of the game was provided by the publisher. 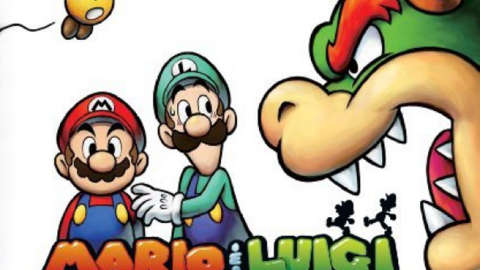 The acclaimed Mario & Luigi series returns with another hilarious action role-playing game. Join the Mario Bros. as their travels take them far and wide.

8.9
Sign In to rate Mario & Luigi: Bowser's Inside Story