March of the Penguins Review

Ironically, while this penguin-themed puzzle game seems geared toward younger players, it may be too challenging for the average kid.

Just as the title suggests, the video game rendition of March of the Penguins is based on the award-winning film documentary about emperor penguins. In the game, you help the tuxedo-colored birds migrate inland, forage for food, and care for their young by solving puzzles and navigating mazes set in the harsh Antarctic wasteland. It may seem silly that a company would make a video game out of a documentary, but the puzzles and subject matter actually mesh together fine. However, what isn't fine is that although the game is clearly aimed at younger players, the majority of puzzles require an adult-sized intellect to solve. Anyone that's still in elementary school will probably shut the game off in frustration long before finishing the first chapter. Conversely, anybody with two digits in their age should be able to work through each of the game's 12 puzzles, but they'll likely find no joy in doing so, because the graphics, audio, and overall presentation are geared toward simpler tastes and fall way behind the curve compared to most of the other games that are available for Nintendo's handheld systems.

Half of the game's dozen chapters are reminiscent of the classic puzzle game Lemmings. The penguins, as they are prone to do, have decided to march from one end of the level to the other. It's your job to plant objects along their path that will help the cute birds navigate the various hills and make it to the end without falling into the chilly waters below. Steps let them climb, tents let them bounce really high, snowballs cushion their fall, and so forth. In all, there are eight different objects that you can drag and drop onto the penguins' path. You must have solid spatial-reasoning skills to figure out the right sequence of objects, as well as be able to make decisions quickly, since the penguins are constantly waddling toward their perceived goal. Because this is an E-rated game, they don't die if they fall into the water. They simply reappear at the beginning of the level. However, the trade-off is that you only have a limited amount of time to finish the level. If you have a mishap near the end of the level, there usually won't be enough time left over for any stragglers to rejoin the main group. Factoring in trial and error, it can easily take 30 minutes or more to figure out each Lemmings-style chapter.

The other six chapters are simpler maze-navigation tasks based on key scenes from the film. In one, you have to guide a male penguin through a gauntlet of other penguins while keeping hold of a slippery egg. In another, you have to dive into the water and catch fish while avoiding predators. Compared to the Lemmings-style puzzles, these maze chapters are ridiculously easy.

Some might enjoy the challenge posed by the Lemmings chapters, if only there were any payoff for doing so. Six puzzles is nowhere near enough, considering the typical puzzle game has dozens upon dozens of puzzles. Furthermore, the presentation is much too simple to captivate anyone that has other games at their disposal. The backgrounds are stark and lack color or animation. The penguins are cute and have a smooth waddle, but they're tiny and don't do much except flap and shuffle. It doesn't help that the accompanying audio consists of a few instrumental tunes that loop constantly, along with some basic sound effects that are meant to be footsteps and penguin squawks. Between levels, beautiful photographic stills from the film are shown, along with factoids about the emperor-penguin migration.

The game is available for both the Game Boy Advance and the Nintendo DS. Both versions have the same levels, graphics, and audio. The DS version is easier to play, however, because you can use the stylus to instantly drag and drop objects. The map that's always visible on the upper screen also comes in handy, as does the automatic save feature. By contrast, the GBA game doesn't have a map and makes players write down passwords to maintain progress. Of course, the GBA game does cost a few dollars less.

Not that many people will or should consider buying either version of March of the Penguins. The Lemmings-style puzzles are much too difficult for younger players, while older players will be turned off by how bland and short-lived the overall product is. The silly thing isn't that they made a video game out of a documentary film. The silly thing is that they made it too difficult for one audience and too insubstantial for the other. 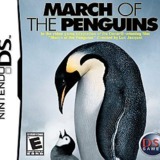