It retains some of its predecessor's faults, but Marble Saga is still a leap forward for the Kororinpa series.

Your goal in Marble Saga: Kororinpa is to guide your marble to the end of each stage by tilting the Wii Remote, while collecting a set number of crystals and any bonus items you feel daring enough to go after along the way. There's an unnecessary story about Anthony the ant's hunt for a golden seed in there somewhere, but the cleverly designed levels are the real stars of Marble Saga. There are still a few flaws that continue to plague the series, but the jump in content, features, modes, and length (not to mention its lower price) makes this marble-in-a-maze game worth checking out.

At just 40 levels, the original Kororinpa was over before you could get a grip on the controls. For the sequel, the developers have more than tripled the number of levels available. The 150 stages spread across several themed areas should keep you busy for hours. Most of the puzzles feature some sort of trick or trap, like conveyor belts, magnetic rods, or pinball bumpers, in addition to the curvy platforms. These traps keep the levels interesting and the challenge at a reasonable curve, though some of them can be frustrating. The cannons in particular might raise your blood pressure quickly, because they give you only a fraction of a second to aim from a wonky perspective and you're forced to start over if your marble is launched into space.

In addition to the core single-player levels, Marble Saga includes a level editor and four-player split-screen multiplayer. The level editor will lets you make some crazy creations from pieces gathered in the story mode and share them with friends online. The controls for editing a level are a bit clumsy, requiring you to tilt the remote to move between the vertical and horizontal axes, but if you're willing to invest the time, you can come away with some dangerous-looking mazes. Both included levels and custom mazes can be enjoyed with up to three friends in multiplayer, though the tilty nature of the visuals and the slow, precise moves required to navigate the mazes don't lend themselves well to split-screen play.

The controls in Marble Saga are simple, occasionally frustrating, and at times amazingly intuitive. Holding the remote toward the screen or sideways, you guide your marble by tilting the maze around it. There are some levels that connect the remote and maze so seamlessly that you'll forget the remote can be used to play other games. Unfortunately, these moments don't happen enough. There are several levels that require you to flip the maze on end to guide your marble, which leaves you holding the remote at a strange angle. Other times, the limited camera movement and frozen perspective will have your marble moving in the opposite direction of your tilts.

If you have a balance board, you can play several levels made specifically for it. These levels would be a cake walk with the remote, but they're a bit trickier on the balance board. The connection between the board and the maze isn't as precise as it is with the remote, so the novelty wears off quickly. Still, it's a fun diversion if you have the patience and joint strength for it.

Graphically the game doesn't look much different from the first Kororinpa. The themes, like ancient Egypt and quilts and crafts, at least add some variety to the merely adequate visuals. Many of the marbles, like the round pig and the cat, return from the first game, with new additions, like the Mii ball, which sticks your tiny Mii inside a marble hamster-style. Not only are the marbles fun to look at, but each one also has different stats. The panda marble, for example, has very low bounce and slide ratings, making it easy to use for beginners.

The sound effects do a good job of replicating the sound of a marble bouncing and rolling on a variety of different surfaces and textures. Some of the special marbles make animal noises, which can be funny or annoying depending on the difficulty of the maze you're in. The upbeat music that plays in the background of each level is bright and catchy, and you'll hear a variety of lighthearted tunes that do a great job of offsetting the potentially frustrating action on the screen.

Marble Saga: Kororinpa has its issues, but it's a vast improvement over the original in terms of value and content. If you can overlook some occasional control and perspective snags, you'll have a great time with this charming maze game. 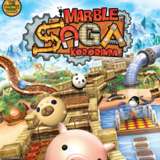 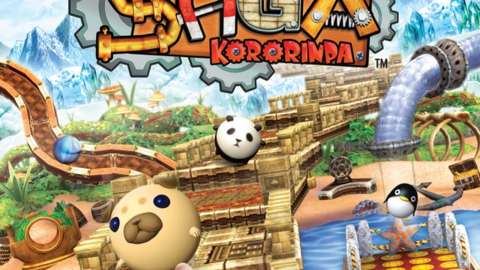