Malicious Fallen may not be developed by Platinum Games, but it sure does look the part. This may have something to do with the fact that developer Alvion supported Platinum Games during the development of such titles as Metal Gear Rising: Revengeance, Bayonetta 2, and Anarchy Reigns to name a few. Malicious Fallen delivers some beautiful, colorful, anime-inspired visuals, and presents a familiar approach to massive-scale fights and flashy combo attacks. But that’s not enough to shake the feeling we've seen it done bigger, better, and more cohesively elsewhere.

Malicious Fallen tells the tale of a land ruled by an insane king whose wife makes a deal with supernatural powers in order to end her husband's reign of terror. After he's gone, however, she finds herself more than a little hesitant to give up on her power trip. She becomes the new despot, subsequently granting her best warriors a share of the glory in rampaging across the countryside. A group of prophets, loyal to the powers beyond, have you in their back pocket. You play the part of the Spirit Vessel, who's been imbued with all the remaining magical power left in the universe, along with a cape called the Mantle of Cinders, to go forth and triumph over evil.

Since all of this is presented in text form, however, it ends up as an easily missable cover story for what essentially boils down to a dazzling boss rush that throws you to the wolves within minutes of starting the game. You're given a short, perfunctory tutorial, a series of portals to choose from, and off you go. The brevity of training could be forgiven if the game were more of an arcade-style brawler where you only really need to know how to hit, dodge, and maybe perform a flashy special, but Malicious Fallen--to its credit and curse--offers a combat system full of tiny intricacies that only really come together via rigorous, Sisyphean trial-and-error.

You begin your quest with a few attacks: the Mantle of Cinders can turn into a shield for defense, a set of giant fists for close-quarters combat, or it can fire a ranged attack that can target whatever's directly in front, and potentially barrage multiple enemies. To add an extra level of complexity, you can also alter attacks so that enemies who die explode, chaining damage to other nearby enemies. All of this is adds points into a resource called Aura.

Aura is everything in Malicious Fallen. Not only is it the resource that you use to heal, but when your Aura stash is full, you're allowed to unleash extremely high-powered attacks that can make relatively quick work of the game's massive bosses. All of this is technically explained in the tutorial, but these instructions mean little without context; you're ultimately left to figure out how to handle Aura on the fly, and likely die several times in the process.

The other gameplay element is a Mega Man-style system where every boss drops a new ability for you to use, and figuring out which ability will have maximum effect against each boss--or even whether what you have available will even make a dent--is, again, a trial-and-error process. It requires that you get very comfortable with each bosses' patterns and attacks, but it also means a lot of wrestling with the game's twitchy camera. It's the basis for a woefully unintuitive targeting system that only focuses on the boss, and sometimes has trouble even activating. It's not unusual to end up on your back, suffering from a barrage of cheap hits for prolonged periods of time, all because you weren't able to target properly. The kicker? Your life force is measured by having limbs and parts of your outfit knocked off--which, on a busy battlefield, can be near impossible to monitor. Typically, it's not until a single hit results in an unexpected game over that you realize how far gone you were.

Through the chaos, however, there are joys to be found. The game's ornate cathedrals and rollicking battlefields are, at times, breathtaking spectacles. The bosses themselves are fantastically designed, and just watching them move and react is impressive. While combat is poorly explained, going back to older bosses with a new arsenal and a better understanding of the game makes for a gratifying form of payback.

The fact remains that you have to perform a lot of legwork to understand how each boss works in respect to your abilities. There's a fine line to be crossed in a boss rush game, where hard fought battles lead to either sighs of relief or aggravated groans. Too often, Malicious Fallen earns the latter. Malicious Fallen isn’t a game that feels triumphant so much as tiring. 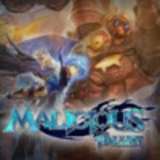