Major League Baseball 2K6 is a deep and feature-rich baseball simulation, but its portrayal of the sport is apathetic.

Nowadays, the criterion distinguishing a great baseball game from a good one is the degree to which the game imitates all of the little plays and broadcast nuances that make baseball such a compelling sport to watch. To that extent, Major League Baseball 2K6 is merely a good baseball game, because while it is a deep and feature-rich baseball simulation, it doesn't deliver the same variety of flashy plays and dynamic cutaways that the truly great sims do. That said, if what you're looking for is a portable baseball game that portrays the nuts and bolts of the sport really well, and you can forgive the stoic atmosphere, then MLB 2K6 for the PlayStation Portable is a solid choice.

From a technical standpoint, the graphics aren't all that bad. Texture quality is hit or miss, such that player faces and stadium signs appear to be out of focus, but player bodies, the field, and the rest of the stadium look crisp. Stadium dimensions, decorations, and player bodies are accurate too, for the most part. Play animations and the transitions between them are sufficiently fluid, which marks a significant improvement over the jerky animations found in the console versions of the game. Spectators in the PSP game look like nondescript flat cutouts, but they do at least stand up and wave.

Unfortunately, while the graphics are decent from a purely technical perspective, the atmosphere they help to convey is lifeless. Aside from the standard dive play and a couple of acrobatic turns, there aren't any flashy plays. You'll also see the same play animations for routine plays happen over and over again. Broadcast-style replays and cutaways are limited to home runs, strikeouts, and a shot that shows players walking off the field between innings. Incredibly, the number of broadcast-style cutaways has been reduced in the PSP game, such that there aren't any batter walk-ups or post-strikeout reaction shots. Nine times out of 10, the game transitions right back to the catcher's viewpoint after the play. During online games, there aren't any replays or cutaways at all. Compared to other baseball video games, the presentation here is absolutely conservative.

It doesn't help that there isn't much audio to speak of. Umpires don't call balls, strikes, or outs. There are just two sound effects in the game, one for when the bat strikes the ball and another for when the ball lands in the glove. Crowd noise is nonexistent, aside from a vague din that rises and falls based on the spectators' excitement level. The only aspect of the audio that had any effort put into it is the running play-by-play commentary, which features the voices of ESPN's Jon Miller and Joe Morgan. Miller's play-calling is descriptive, and Morgan never seems to run out of opinions or stories. They're not always accurate or timely, but they are a joy to listen to.

To some extent, MLB 2K6 makes up for its lethargic portrayal of the sport by providing a full range of play modes and serving up a gameplay experience that's deep and satisfying. The 10 different offline play modes are quick game, season, franchise, GM career, World Baseball Classic, playoffs, home run derby, home run derby career, manager showdown, and situation. Aspiring general managers will enjoy the GM and franchise modes. All of the necessary aspects have been implemented, such as trades, drafts, minor-league rosters, lineups, and pitching rotations. MLB 2K6 also factors player fatigue into day-to-day performance and lets you specify how much time off a player gets as a percentage of his overall playing time. If you have a wireless access point nearby, you can take advantage of the game's online mode, which lets you play exhibition and home run derby matchups against other players. Unfortunately, the PSP game's online mode doesn't include tournament or league play like the console versions do.

The hitting, fielding, and baserunning interfaces aren't as intricate as the control schemes found in other baseball games, but they get the job done anyway. To swing the bat, you simply have to position the sweet spot of the swing with the analog stick and then press the X button to take your hack. If there are base runners on, you can queue up stolen-base attempts before the pitch and send or retreat runners once the ball is in play. Should you want a base runner to leg out a hit, rapidly tapping the indicated button will cause the runner to run faster. On defense, you use the analog nub to move the active fielder and press any of the four main buttons to throw to any of the bases or home plate. Diving catches and wall climbs can be performed by pressing the X button when the fielder is near the ball. From the pause menu, you can access various managerial functions, such as substitutions, pitcher warm-ups, and mound visits.

MLB 2K6 employs its own take on the meter-style pitching that's all the rage in baseball games these days. Pitches are selected and aimed using the buttons and the analog stick. When you press the button to select a pitch, the targeting cursor grows into a large circle that gets bigger the longer you hold the button. This indicates how much power or break you've built into the pitch. Letting up on the button locks in the effectiveness and causes the circle to quickly collapse into a crosshair. You then have to tap the button one more time to lock in the accuracy. The smaller the circle is, the more accurate the pitch will be. In practice, it's a highly intuitive system that boils the complex art of pitching down to a couple of quick button presses.

Another intriguing aspect of the pitching interface is that it's possible to specify where the catcher sets up for each pitch. By holding the left shoulder button, you can use the analog stick to position the catcher's glove over any of eight spots around the strike zone. This lets you psych out players by setting up outside for inside pitches and inside for outside pitches. It's also the key to the game's optional payoff-pitch mechanism. In a real baseball game, a pitch made on a two-strike count is called the payoff pitch, because the pitcher's confidence can be shaken or strengthened based on whether the next pitch is a ball, a hit, or a strike. MLB 2K6 simulates this when you choose to position the catcher on a two-strike count. If your pitch lands in the glove without causing the catcher to move, you'll add a couple of points to your pitcher's effectiveness rating. If the catcher has to move to catch the ball, you'll lose a couple of points. Perhaps the implementation is a little bizarre, but the ability to adjust the catcher's positioning is still a welcome addition.

Unique to MLB 2K6 is its Inside Edge system. Besides incorporating scouting data into player strengths and CPU behavior, Inside Edge makes hitting and pitching suggestions to you on a pitch-by-pitch basis during the game. When you're on the mound, the game will suggest the most effective pitch and location based upon the hitter's past performance in that particular count. When you're up to bat, the game will show you how likely a pitcher is to throw each of his pitches, as well as display the three most likely spots where the next pitch will be located. What's nice about Inside Edge is that it makes scouting data an integral part of gameplay.

Generally, MLB 2K6 does a good job of portraying what tends to happen during a real-life professional baseball game. The CPU plays a smart game, is relatively aggressive on the bases, and makes substitutions when they're appropriate. Overall, the ratio of ground balls to liners and fly balls is right on the money. When you swing too early or too late at pitches, foul balls and weak pop-ups are more likely to result than clean hits. Pitchers get rattled when there are men on base with no outs, or when a fast runner is on first, which causes the pitching cursor to bob and weave. Inexperienced fielders also tend to bobble the ball or make offline throws more often than veteran players do. Occasionally, you'll run into an artificial intelligence gaffe, like a fielder failing to pick up the ball or touch a base on a putout, but those sorts of glitches occur far less frequently in the PSP game than they do in the console versions.

On the whole, Major League Baseball 2K6 for the PSP is a solid baseball sim that hasn't had to sacrifice too much in the transition from console to handheld. Diehard simmers will probably be able to forgive the game's stoic atmosphere, since the gameplay and features are deliciously deep. 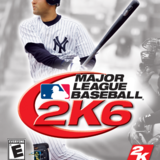 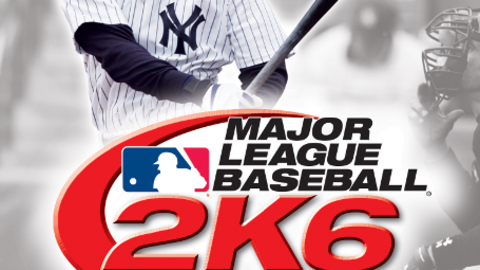